I admit to having some reservations about starting this book because I had a real hard time with the heroine in Hard Evidence. However, the gritty and realistic feel that emanated from the pages of this book were captivating and made the book hard to put down. I read that you had gone into lockup overnight so as to experience what it was like incarcerated. Even that short time clearly had an impact in the writing of this story. 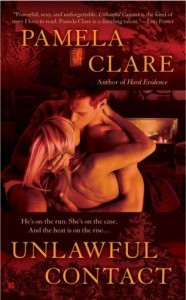 Marc “Hunt” Hunter and Sophie Alton had a moment in high school and then Hunt disappeared from Sophie’s life, seemingly forever. Fast forward twelve years and Sophie is a journalist celebrating the release of a female inmate whose life Sophie had been following through her writing and Hunt is a felon doing hard time for the murder of a federal agent. Sophie had begun reporting on Megan’s life in prison when she heard about the stillbirth of a different inmate’s baby. When Megan was released, Sophie was to meet her and help Megan adjust to post incarcerated life and to reunite Megan with the baby she birthed in prison. Except, Megan has fled in violation of her parole. Now everyone is out searching for her. Sophie is determined to find her first and get to the root of Megan’s initial incarceration and her troubled statements about prison abuse.

Sophie’s search for Megan leads her to inmate Hunt, Megan’s brother. Sophie doesn’t realize that this man is her old high school sweetheart. Marc knows. He’s torn between his feelings for Sophie that lingered even beyond high school and that have kept him sane while being imprisoned. He hates that he has to use her to gain his freedom but his sister’s life is on the line and he is determined to try to save her when he couldn’t before. When Sophie comes to prison to see if Hunt has any leads on Megan’s whereabouts, Hunt uses this opportunity to take Sophie hostage and flee from prison.

Sophie’s understandably fearful, outraged, and then becomes sympathetic. It helps, in part, that Sophie is not Marc’s captive for the entirety of the story. Because she is free of him, it does seem that she chooses to believe in him, not out of some Stockholm Syndrome, but because of the facts that she sees piling up in his favor. Her journalistic ears are twitching and the roadblocks that are being thrown in her investigatory path are only making her hungrier for the story.

The real problem I had in this book was the sugary, over the top, full of babies epilogue. I understand that Marc and Sophie had a difficult path to their HEA, but I didn’t need the long epilogue full of past characters and children to make me believe in it. B.

→ Jane
Previous article: Dear Author Recommends for April
Next Post: Book Tastes Form the Basis for Some of the Literati Relationships