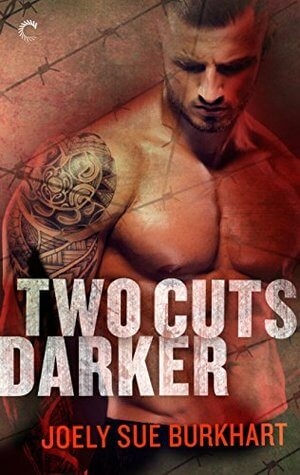 I became interested in your erotic thriller, One Cut Deeper, when Melissa K recommended it to me while we were chatting on Twitter (as we often do). I said I needed a dark romance that would take me to the edge but still hold it together for a satisfying HEA, and most importantly, not piss me off. This can be difficult for an author to accomplish in dark romance—it’s a delicate balance creating a hero who’s demanding and disturbing, but not an actual asshole. Books that pull it off are few and far between. Apparently, One Cut Deeper was one of Mel’s favorite’s of 2015. Such high praise perked me the hell up, and also, I remembered Jane had given it a positive review back in May 2015. So, of course I had to one click and add it to my tbr.

Coincidentally I received the sequel, Two Cuts Darker, soon after from Carina as an arc in a review request. Score! Now I had both books and I could do a back to back glom. (Which we all know is romance reader nirvana).

I read both books, but this review will focus on the new release, Two Cuts Darker.

Life on the run with an assassin hasn’t been what Ranay thought it would be. In fact, parts of it more closely resemble a sex-fueled vacation—until duty calls. The FBI believes Charlie’s brother is working for a human trafficking ring, and Charlie is the only one who can bring him down.

Charlie fears Vincent has become a murderous monster like their father. He owes a mercy to the brother he remembers, the one who’d never want to be an uncontrollable killer. But Charlie has never had to kill someone he loves. Not even to save them from a dark, inherited curse.

Killing his brother might be enough to push him over the edge.

Enough to ruin everything he’s built with Ranay.

As a bodyguard for the Vlasenko bratva, the very cruelest arm of the Russian mob, Vincent Byres has seen and survived the worst the world has to offer. Former Special Forces, ex-CIA and a past inmate at Russia’s most brutal prison, he’s earned his reputation. They call him Ghost because he’s already dead inside.

Madison “Mads” Archer’s hatred for scumbags who traffic in human lives is personal—her sister was taken when the girls were just children. Now Madison’s on a joint FBI task force, deep undercover as a sex slave. It’s a small price to pay to see the Vlasenko bratva taken down.

A violent criminal like Vincent Gyres doesn’t make a trustworthy ally, regardless of his CIA background. But Mads will use anyone and anything to stop the taking of another innocent young girl’s life. Vincent’s invitation to her to play his submissive in order to get closer to the leader isn’t the problem. Trusting him, wanting him…loving him is.

I read “One Cut Deeper” before “Two Cuts Darker” because I wanted to experience the story as a whole. I’m happy I did because while “One Cut Deeper” had a satisfying HEA, there was still more relationship and family issues to be negotiated in the second book. “One Cut Deeper” delivered exactly as promised, shocking me with kinks and violence (blood, biting, pain, knife play) I could not have predicted and yet managed to be an amazingly romantic story.

*I admit, it was so dark though I had to pause and read a light category in between as a palate cleanser, but I was still eager to continue with Two Cuts Darker.

The new release, “Two Cuts Darker “is the continuation of the romance between Charlie and Ranay, but also includes the addition of the story of Vincent and Mads. This is not a secondary romance; both stories are given equal weight. Sometimes when I read books with two concurrent story lines like this, one will be more compelling than the other and leave me disappointed. I’m happy to report that this does not happen in Two Cuts Darker. I enjoyed both couples equally.

“One Cut Deeper” was told exclusively from Ranay’s point of view, but “Two Cuts Darker” is really the story of Charlie and Vincent, brothers who are the sons of a serial killer father. I liked how in this book we are often deep in Charlie and Vincent’s points of view. They are experts at killing, but are determined to use their powers for good. Both are dealing with the shame of their parentage and the repercussions of this in their present-day relationships. They feel unlovable and out of control and I loved every moment reading about these men struggling with their inner demons. Charlie is portrayed as being not much taller than Ranay (but with big hands) and Vincent is described as a few inches taller than Charlie. This depiction of the heroes is unusual in our six foot plus romance hero world, but this didn’t diminish the hotness of either man. I discovered I had a thing for Charlie’s big, rough, hands…

The sex scenes are visceral, gritty, emotionally intense and plentiful (just how I like them). In both books each sex scene serves an actual purpose, moving the story forward and creating more intimacy between the couples. I especially enjoyed the first sex scene between Vincent and Mads. Vincent requires blood being spilled to get an erection and Mads likes rape fantasy. As you can imagine, this was a truly creative and intense scene. The journey the two women and the two men take in this story toward sexual fulfillment and acceptance is deep and joyous. This is erotic romance at its best.

I was especially impressed with the depiction of the way the heroines are treated. Despite their rough kinks the men are actually very respectful towards the women they love and I appreciate the care taken toward showing the agency the heroines have within their relationships. This left me happy, knowing that in the end no women were treated in a shameful or demeaning way in the creation of this dark romance.

The only problem I found with this book was that the transitions between scenes dragged on for an eternity. Several times I found myself skimming, skipping whole pages to cut to the chase while the story went into great detail about the boat ride, the taxi ride, or the walk to the next location. Other than that though, I really enjoyed “Two Cuts Darker.” I would give it a solid B.

I look forward to trying more of your books in the future.

→ Michele Mills
Previous article: Thursday News: The one about Apple and the FBI
Next Post: Friday News: Challenging the status quo