I picked up one book of yours after reading a slew of reviews by Jayne. Jayne’s not a romantic suspense reader and the fact that she liked several of your books was enough to push me to buy one of your books. One book was all it took to get me hooked. Now when the ARCs arrive at my house, I sneak off to read them before sending them on to Jayne. She mentioned that Twisted looked well read. We thumb wrestled over who would review this book and Jayne graciously allowed me the privilege. 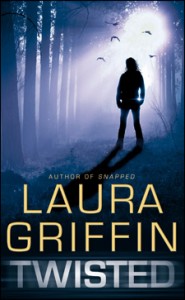 Twisted is a class Griffin book featuring a good mystery, competent detectives and slow unwinding romance.  New Detective Allison Doyle likes the look of FBI Special Agent Mark Wolfe despite their embarrassing first meeting when the two interrupt a convenience story burglary.  Mark is chasing down a possible serial killer.  Mark thinks that a recent killing in Doyle’s district is the work of this serial killer and not a traditional suspect.

Allison helps to convince her department that the recent killing is connected to another attempted murder and possibly to these other killings, all occurring in October.

Allison emanates an interesting duality. In some ways, particularly paired with Mark who has 16 years of experience on her, she shows a vulnerability and lack of surety (Allison knew better than to let all that alpha-male confidence have an effect on her, but it did).  But she’s bent on deserving the detective badge she had earned and her pugnaciousness and earnest attitude lends her a capable air.  She came off as a young, smart detective who was clearly destined to be great at her job.

Mark’s world weary demeanor wasn’t overplayed but provided the reader hints on how the emotional conflict would be resolved.  I also appreciated that two individuals whose training and job was to notice details, read body language also used those skills when interacting. Mark, in particular, was a profiler and Allison recognized his ability to read her non verbal communication but she also knew when he was lying:

“I have a federal badge. I wield influence in all kinds of law enforcement circles, including your task force. You’re a rookie detective.”

“So, a sexual relationship between us would be totally inappropriate.”

“That’s why you don’t want to sleep with me.”

He hesitated. It was only an instant, but it was enough. “No.”

She tipped her head to the side. “What is it, then?”

“You’re not my type.” She gazed at him across the car, and she knew—with certainty—that he was lying his ass off.

The serial killer suspense portion of the book is standard and probably the weakest point in the book. It’s not that it wast well thought out and that meticulous police work rather than crazy hijinks solves the mystery but rather there are so many serial killers in books that even the mention of one seems a little tired on matter how well done.

The blend of romance and suspense was good and the emotional conflict between Allison and Mark was multilayered but most of it relied upon Mark’s issues regarding his inability to stop working, his belief he was too old for Allison, and his conviction he would only end up hurting her.  Fortunately, Allison is persistent in pursuing what she wants – evidence to apprehend a killer and getting her man.

Despite this book being an entry into a longtime series (The Tracers) I think a reader would be able to start with this book without many issues.  The two main characters rarely appear in previous books and the mystery is self contained within this story.  B