The foundation of superstition is ignorance. First Officer Paul Cronin has no use for magical thinking—he’s a logical guy, a skeptic who only believes what he can see. When a new assignment on Flight 511 takes him directly through the legendary Bermuda Triangle, he’s not concerned about losing his aircraft to supernatural forces. He’s busy trying to hook up with handsome flight attendant Dallas.

Dallas seems eager to oblige at the airport, but his ardor cools quickly when he finds out he and Paul are now on the same crew. Then the turbulence hits, and Paul soon discovers there’s more to the Bermuda Triangle than made-for-TV movies.

While trying to decipher his cryptic predecessor’s notes and guide Flight 511 around the Triangle phenomenon, Paul attempts to piece together a relationship with Dallas. It seems that forces—both paranormal and mundane—are stacked against them. Can Paul navigate a successful course through the turbulence while he finds a way into Dallas’ heart?

I first read this collection of novelettes when it was run as monthly serial in the author’s newsletter. When the novelettes were republished as one book I bought it and reread them all together in preparation for this review. I usually really enjoy your work and while this one may not be as often reread as others are, I did like it overall. The reason why I do not see myself rereading this one often has nothing to do with the quality of the story, but with my unhappiness with the fate of one of the characters. The main couple does have their happy ending, just to clarify for those who would care. 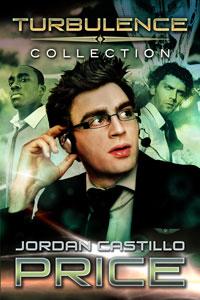 One of the things I love about your work is your ability to always bring something new to the tried and true tropes and plot turns. I remember so well when I finished the first novelette in this collection and I was thinking – oh I know what would be happening next. Of course I was wrong.

I really loved how well researched the settings felt to me. I do not know anything about pilots and airplanes, but when I read the paragraphs like this one, I could not help but believe that what I was reading was correct information. At the very least I thought that it was written with such a confident hand that even if it was wrong, I still believed in it.

“Paul specialized in Embraer ERJ-170 regional jets, and though the ERJ-135 waiting for him was slightly smaller, he had plenty of hours under his belt with this scaled- down version, too. That particular specialization was the most likely reason someone with more seniority hadn’t yanked the flight out from under Paul’s nose. The 135 held fewer passengers than 170, plus the Captain, the First Officer and only one FA, so it would be the tiny crew of three overnighting in Bermuda.”

For readers who may be alarmed, please do not worry – the story is not a technical treatise at all. It is just that I often thought that research of the technical information was the solid base of the story, and the romance and paranormal things which were happening were built with this foundation in mind. Honestly, I never felt that I experienced an information overload and as I said usually my eyes glaze over the technical data about planes, ships, cars, etc.

The paranormal element – the weird things which happen to Paul and the crew of the Flight 511 when they fly through Bermuda triangle was fun to read. There were several moments during the course of the story when I was thinking – oh I know how it would be resolved, and no, not quite. I mean, I am not saying that this story comes up with something unheard of in the history of books with paranormal elements. I definitely would not go that far. What I will say however is that every time the small unexpected twist was added, it made the story more unpredictable and original for me. Even the final resolution of the paranormal element may not have been exactly new in its entirety, but at the same time it did not look *exactly* like any story with the similar twist I have read about.

The romance was just wonderful. The initial attraction between Paul and Dallas slowly developed into something more, but it was not Insta! Love at all. As an aside I liked that the first thing about Paul that Dallas noticed was his blush and not to his lashes (too many references to lashes’ as the guy best feature in mm stories, which I get really tired of ). I really liked that both Paul and Dallas behaved like adults even when they disagreed (when they had their serious disagreement I was thinking please do not let them turn into petulant teenagers and I was so happy they did not), and that the writer also managed to put in some social commentary without sounding preachy (to me of course). She managed to include some great character development for both guys without changing their personalities much.

Paul is a very rational person, and during most of the story all he wanted to do (besides hooking up with Dallas) is figure out a rational explanation for what was happening. And in a sense he did, but he also had to open his eyes and heart to something else. Dallas is a wonderful man, and he also goes through some growth and change, although I would say it was a little bit more visible in Paul.
One of the reasons I love JCP’s work so much is because she writes great women supporting characters in her stories and this story is no exception.

The female captain of the Flight 511 is wonderful. She is overall quite likeable, but most importantly I wanted to sit down with her for a chat. The only little annoyance I had was when Paul described his first impression of her as “not attractive but competent”. I mean, why can’t woman be attractive and competent at the same time? But then I thought about it and decided that since Paul was not interested in women he may not be the perfect judge of attractiveness. And in another book of hers there was a very attractive AND extremely competent woman who beat the main characters in the competition hands down, so I decided I should not be nitpicking much, especially considering the fact that I cannot remember a writer in mm fiction who writes such interesting and varied female characters in her books as consistently as JCP does IMO.

The only criticism I can offer is that since the story was originally a collection of novelettes, I wish the titles of the novelettes were named in the collection (I know they are named in the blurb, but I wish they were titled throughout the story). The reason I am saying that is because since the story was a collection of novelettes, I thought that some abruptness between the chapters was perfectly warranted and made sense. The book tells a coherent story, but we do not necessarily have next novelette picking up the very second after last chapter of the previous novelette ended. When now we have the story published in one collection with only chapters dividers, the breaks between some chapters seemed quite abrupt to me and to some readers may feel they are abrupt without any justification.

I really enjoyed this book. But for the sadness I felt about the fate of one of the characters, it would have been a frequent reread for me; nevertheless I still recommend it with great pleasure.