Note:  The comments are closed for this review. I’d direct you to the Dear Author Book Club pick for May for centralization of comments.

Rory  does one thing really well – school. Everything else, particularly the social scene and the interpersonal relationships with the opposite sex, she can’t quite grasp the nuances. Her two roommates in college, Jessica and Kylie, are the opposite, outgoing and uninhibited.  The three become close friends despite their differences. Jessica and Kylie want to help Rory lose her virginity and get a little experience with the opposite sex. Jessica even urges Rory to pursue Tyler, a hook up Jessica enjoyed. 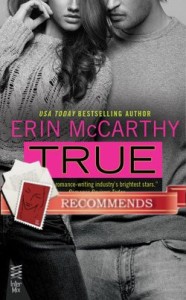 The casual nature of relationships that Jessica and Kylie enjoyed were a refreshing change.  Jessica’s enjoyment of random hookups that were presented without judgment read like the antithesis of slut shaming. (I’m particularly thrilled that the next book features Jessica as a heroine).  The ready circle of friends enjoyed by Rory and their drinking, casual drug use, and hookups all felt very authentic to me.

Tyler is putting himself through EMT school in order to provide the much needed financial support his brothers require given that his mother is a drunk and a drug addict.  Tyler’s situation is made particularly more challenging because one of his brothers is a Downs’ Syndrome sufferer and occasionally needs specialized care.

Despite being told in the first person, you get a real sense of Tyler as a person. While it is easy to measure Tyler by his tattoos and his flippancy, his personality is revealed through his actions toward his brothers, his care toward Rory, his awkwardness in front of her family. I thought some self snark was engaged when it was revealed that one of Tyler’s tattoos is a really poorly done batman.  Who hasn’t seen bad tattoos on the internet and cringed?

Rory’s dad is a professor and has no love for Tyler who he perceives as not good enough for Rory. He’s not going to college. He doesn’t have a full time job. His mother is a drug addict.

Rory has to learn to stand up for herself–against her roommates and their good deeds; her dad and his good intentions; and even Tyler himself.  Rory’s experience living on her own, away from her father, leads her to an understanding about her own privileges in life, privileges that Tyler did not enjoy, privileges that Tyler believes sets the two apart irreparably.

I thought the ending, while imperfect, was suited to the story.  There isn’t an easy way out for Tyler.  He suffers some serious consequences because of something that goes on in his life.

There are a few things that I could have done without.  Jessica and Kylie try to hire someone to rid Rory of her virginity and that read faintly ridiculous to me.  I wished the Downs Syndrome character would have been presented a little more inclusively.  Rory was almost too innocent for me. She proclaimed to have never even seen a penis before and that, well, that stretched my credulity.  But for the most part, I appreciated the chances that this book took.  That it presented females in a positive light, represented college experiences fairly authentically, and ended unexpectedly.  B

P.S. For those who wonder about the sensuality content, it’s light.