I have long been a fan of your Samaria series (Janine introduced me to it), but hadn’t read any of your books in several years. When I saw that you had a new book coming out that wasn’t part of an existing series, it seemed like maybe it was time to get reacquainted.

Zoe Ardelay has  recently buried her beloved father and is existing in a haze of grief when an opulent carriage appears in her small village; it contains Darien Serlast, envoy to the king. Zoe is summoned to the capital city (a place her father and thus she were banished from years before) to be wed to the king. She will be his fifth wife. 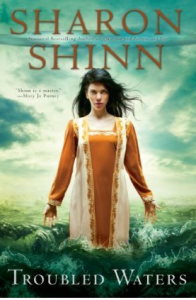 Thus begins an intriguing new series that focuses on a world where people are born with particular elements that determine their personality and their strengths and weaknesses. Zoe is coru – of water and blood. Darien is hunti – wood and bone. Her elements mean that she’s restless, mercurial. His make him blunt and unyielding. The other ruling qualities are elay (air and soul), torz (earth and body) and sweela (fire and mind). I liked this aspect of the story and the way each quality had a double meaning – one related to the body and one to the larger world.

The people of this world believe that the elements needs to be in balance in order  for there to be harmony. Zoe begins to get an inkling of the power she holds when the capital city, stricken with drought for several seasons, is deluged  with rain upon her arrival. The journey and Zoe’s return to the place of her birth snaps her out of the worst of her grief, and she impulsively slips away from Darien shortly after their arrival, before she can be brought to the palace.

The first half of Troubled Waters is quite slow going. Zoe finds a place to live (of sorts), gets a job, makes some friends. But she’s honestly in a waiting period, and it affects the tempo of the story. It’s only in the second half of the book (well, maybe the second two-thirds; the first third probably felt longer than it was)  that the story kicks into gear and I got really involved. Ultimately, there’s a lot going on in the capital city  of  Chialto; once the action switches to the palace events evolve at a quick pace, as Zoe learns some secrets, including the one that led to her father’s banishment, and begins to really recognize her own extraordinary power.

The kingdom of Welce  is ruled by King Vernon, but his rule is heavily influenced by the primes – heads of the Five Families (a name I disconcertingly associate with the Mafia), each of whom correspond to one of the five elements. This part I found a little confusing, because it seems to suggest that each family is specifically associated with one of the elements (making a person’s element essentially genetic), but this didn’t seem to actually be the case. As far as I could tell, a sweela and a torz could produce, say, a coru. So I’m guessing that the elements are associated with specific families, and then the primes (the choosing of whom  is a somewhat mystical process) from those families have that element as “their” element, but it doesn’t mean everyone in the family necessarily does.

Other than my confusion over this aspect of the story, I found the world building fairly simple and straightforward. Welce seems akin to a pre-industrial age  country in most respects; the only technology found are the recently invented elaymotives (also called smokers) which are essentialy fairly primative automobiles invented by the Dochenzas, who are the ruling elay family. There is little information about other kingdoms, except for the neighboring kingdom of Soeche-Tas, whose people are called Soechins and who seem to be pretty creepy. It’s King Vernon’s desire for an alliance with the Soechins that begins the dramatic dénouement of the story. Zoe’s actions at this point in the story seemed pretty extreme to me. Though in the end they made a certain amount of sense, and things worked out okay (perhaps rather unrealistically), I was still left with the sense that Zoe is the sort of person you wouldn’t want to piss off, lest she go all Sissy-Spacek-as-Carrie on you.

Speaking of Zoe, it took me a while to warm to her; she is pretty numb through the early part of the book and thus, while she’s a sympathetic character, she’s not hugely compelling. I really liked the way she developed and came into her own as the story progressed, though. I particularly liked the way she made peace with her father’s flaws, which were numerous (and some of which she only learned about in the course of the story). And while her power intimidated me a bit, I also admired it. Zoe ultimately ends up being a rather kick-ass heroine, and who doesn’t like a kick-ass heroine?

Darien is a more conventional romance hero in a sense; he’s the  strong, silent type who intrigues precisely because he is so mysterious. In the end, I wish he’d unwound a little bit more than he did, but that’s just my personal preference for sturm und drang coming to the fore. At times I shared Zoe’s frustration with Darien’s attempts to manipulate and control her, but ultimately he has good reasons for behaving as he does and he proves his devotion to her admirably.

The best of your Samaria books have a quiet intensity that I really love. Troubled Waters felt more quiet and less intense to me. It’s not really the action or the characters but a quality in the writing that makes the book feel this way to me. I’m giving Troubled Waters a straight B.