REVIEW: Toward the Sunrise by Elizabeth Camden 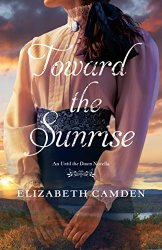 Julia Broeder is only six months shy of graduating from the Women’s Medical College of Pennsylvania when one small decision spirals out of control and results in her expulsion. Hoping to travel the world as a missionary doctor, her only choice is to return back home…or throw herself upon the mercy of Ashton Carlyle.

Formal and straight-laced, Ashton Carlyle is not pleased to see an expelled Julia arrive at his Manhattan office. His position as a junior attorney for the Vandermark family’s world-famous shipping empire entails taking care of the Broeders, longtime employees of the Vandermark family. But Ashton has no intention now of using his employer’s resources in defense of Julia’s impulsive and reckless actions.

What Ashton did not expect was a scathing reprimand from none other than the Vandermark family patriarch or the bewildering resistance from Julia herself when he’s forced to change his tune. At an impasse, Ashton and Julia never anticipated the revelations that arise or the adventure that awaits them.

As soon as I saw your next book listed, I marked it on my calendar to seek it out. Then I saw this freebie (whoo- hoo) prequel novella listed and I one-clicked on it to have it delivered on the day.

It’s hard to argue with what Julia does. But oh, what a price Julia pays. Julia is no scaredy cat or demure violet. She had the guts and determination to ask for the Vandermark’s assistance with her college tuition in the first place and when the stuffy lawyer – no matter how good he looks or how nice his clothes are – frostily turns down her request for assistance in fighting her expulsion from medical school, she keeps her head high and shames him with her coolness in the face of his dismissal.

Ashton Carlyle’s reasons for his inability to countenance Julia’s, in his opinion, throwing away the opportunity she had been given over a dog, a dog for heaven’s sake!, make sense once the story of his struggle to attend college is revealed. For someone who had to watch his father work to exhaustion to afford the tuition and even then go into debt, it would indeed be hard to casually listen to Julia’s story with any sympathy.

Goats and gutta-percha. Okay this is an interesting combination of things to be explored in a story. But as Ashton knows, if someone were to lean in close to a Vandermark and whisper something a la “The Graduate,” it would be “gutta-percha.” Yet instead of the austere congratulations he expected from his employer over his efforts to secure the world supply to be used for electrical wiring, Ashton is stunned when Vandermark rips him a new one for not helping Julia. Hmmmm, enquiring minds – and Ashton – want to know why.

His further efforts to accommodate his eccentric, ruthless business employer and get Julia back into med school runs into another problem. Well, lots of problems in the form of pregnant goats that Julia has promised her neighbor to help kid. As messy as he discovers the process is, he can’t help but admire her determination to stick to her given word to finish the task and the sense of accomplishment it gives him when he has to pitch in and help. Even if it does ruin his shoes.

As Ashton and Julia bond over kidding nanny goats, they exchange life information – hopes, dreams, their pasts. And I don’t just get told that Julia admires Ashton or he admires her, I can see that they do and why they each do. When at last Julia tells Ashton the full story of what she did at her expulsion hearing, he finally understands her foot dragging but he also knows what Julia’s got to do, even though he knows she doesn’t want to do it. When he urges her to go back, I get the feeling he’s doing it because he knows that she needs to face what she said to the Dean, even if it’s gonna hurt. But he’s there to celebrate her triumph and the knowledge she gains getting it.

It’s the gift he chooses to give her that really tells me how he feels about her. Not just any gift, it’s one that means the world to him and that he wants her to take with her. Wow. Better than diamonds. But the gift he gets next shows the depth of the relationship between Ash and his father in ways 4 chapters of explanation never could.

Once Ashton has come to a decision, partly courtesy of his father’s generous spirit and some sharp advice, he wastes no time in acting on it. Bravo, Ashton. The way he manages to combine his and hers together is brilliant! So a very good little novella here, wonderful interactions between Julia and Ashton with a resolution and way to keep them together that makes great sense. I assume the mystery of why the Vandermarks are so set on helping the Broeders will be revealed in the next book. The epilogue, well that sounded a little tacked on even though I know it’s partly to set up the next book. Still, this one had goats! B

→ Jayne
Previous article: What Janine is Reading: Spring and Summer of 2015
Next Post: DAILY DEALS: Regency, PNR, mystery, and fantasy