REVIEW: Torn Away by Jennifer Brown 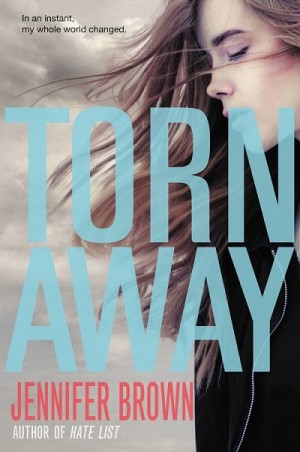 Some days I get in the mood for what I call “wallow” reads. Books that are emotionally wrenching and send you through the ringer. I can’t read novels like that all the time but going through the cathartic process of loss, grief, and recovery is nice once in a while.

For Jersey, living in the Midwest means that you get used to hearing the tornado sirens. You learn what to do when they sound. But knowing in theory is different from knowing in reality and Jersey learns that firsthand when a huge tornado levels her town.

Jersey loses everything. Her house is destroyed. Her mother and half-sister are killed. Her stepfather falls headfirst into a downward spiral that leaves him unable to take care of Jersey. As a result, she’s uprooted and sent to live with relatives she barely knows. The situation is less than ideal and now she has to learn to live again, rather than merely exist.

I will say that this book is one of the most accurate portrayals of a teenager going through the grieving process. Jersey is not always nice. Sometimes she does and says awful things. But I felt her pain acutely and understood where she was coming from, at all times. Kudos for that.

I admit I was really pissed at Ronnie, Jersey’s stepfather. I kept rooting for him to climb out of that black hole he fell into, to step up and do the right thing but spoiler, everyone, that doesn’t happen. It’s just a terrible thing to do to a child, saying that he’s can stand to be around her because she reminds him too much of her mother. It’s not that I don’t understand what happened. He loved Jersey’s mother so much that he couldn’t imagine life without her so her death destroyed him, but there’s truth in Jersey’s observation that he would never have done the same to her half-sister, who is his biological daughter.

Ronnie’s abandonment is further worsened in my eyes when he sends Jersey to live with her biological father. It’s not like he didn’t know her biological father wasn’t bad news — drunk all the time, abusive, and in and out of jail. To make matters worse, the entire family was like that. Because I wanted Jersey to pick up the pieces of her life and heal, I hoped that she’d find a way to make the situation work. I still felt that way even as all signs pointed to that never happening because her father’s family is just too broken.

During this section of the book, I was a little terrified that Jersey would be stuck with these terrible people. As her family life kept deteriorating, I worried that she would have to settle and be numb. I think that’s a compliment to the writing skill here since I wanted Jersey to have a happy ending when so many in her life had, and were continuing to fail, her.

I thought it was interesting that the book explored the different facets of a person. Jersey knew her mother in only one light. Then she discovered some ugly truths courtesy of her father’s family, and then later from her maternal grandparents. It’s hard to learn these facts in the wake of a horrible loss but in some ways, it’s good because Jersey was so close to putting her mother and little sister on untouchable pedestals during her grief. On the other hand, I thought the book didn’t do quite enough with it. It felt like it should have taken up a bit more of the book and the fact that it didn’t was a disappointing.

This isn’t a book that I’d recommend to everyone. It’s heartwrenching in spots and the portrayal of grief is so spot-on that it hurts to read sometimes. But if you’re in the mood for something like that, then Torn Away is worth a try. B