NOTE: Though I’ve attempted to avoid spoilers, at this point there isn’t any way. If you’ve not read all the books preceding this one, read the review at your own risk.

Well, it has taken the better part of two years to get my hands on the next Temeraire book but it’s definitely been worth it. Old dragons, new dragons, old enemies, old friends, a new continent to explore plus a closing battle that made me feel slightly sick while reading it…”Tongues of Serpents” has them all. But in all honesty, there were parts which dragged to go along with the heart pounding bits. 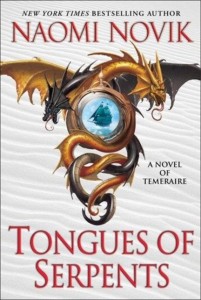 After an eight month voyage from England to Australia aboard the dragon transport HMS Allegiance, Temeraire and Laurence have arrived in Sydney along with Iskierka and Granby – not by Granby’s choice but once Iskierka decides to go, she goes – where they find a colony in rebellion against the governor and a populace drunk most of the time. Laurence’s sentence of death for treason may have been commuted to transportation but his standing among his fellow military men is sunk as low as it ever was. Thinking a dragon would aid their cause, both sides of the rebellion court him and Temeraire yet the politics work out that taking either side would ruin them. Now all await word from England on the fate of the rebel leaders.

But instead who shows up but Captain Rankin, he who treated poor Levitas so cruelly. Jane Roland had sent 3 eggs with the transport in order to establish a new covert in Australia and Rankin’s lordly family has finally pulled enough strings and thrown around enough weight to get him assigned to take the next one which hatches. Despite Temeraire’s entreaties to the egg to reject this potential captain, the newly hatched dragon sizes Rankin up, asks some cool questions about rank and wealth then decides to accept him, though he does reject Rankin’s choice of name for his own selection. Man and beast soon prove that God works in mysterious ways, much to the mingled amusement and/or frustration of the others.

All are getting bored waiting around in the heat when a proposal is made by the rebellion leaders which will get the dragons and their crews out of the way since none of them seem inclined to support either the deposed governor nor the rebels. The Aerial Corps will scout a trading route through the Blue Mountains which surround Sydney and if possible build a road to allow colonization of the interior of the continent. And if they can covertly discover how illegal trade is bringing Chinese goods into Sydney, all the better. Expecting to be gone a week or so at most, the whole crew sets off only to find themselves beset by enemies they can’t see, chasing after something they can’t afford to lose and coming face to face with a threat to England which they might not beat.

I think I mentioned in my review of “Black Powder War” that the trip down the Silk Road, while having its moments of interest, also had its share of tedium. Ditto the laying about at the beginning of “Victory of Eagles.” There was a whole lot of political maneuvering and new characters to learn which were key to later events but which took a lot of time and patience to commit to memory before things picked up. This book suffers from both. Yes, we the readers need to learn how you are going to portray Australia in this series since you delight in not only adding dragons to the Napoleonic Wars but also in altering history and natural flora and fauna. But at times I was getting as impatient as Temeraire for some action.

Then the journey began and for a while, a long while, it was like watching slides of a neighbor’s vacation trip. Interesting at first but later a seeming endless repetition of the similar shots of the same people wearing the same thing and grouped together in the same way varying only by country. Here there would be moments when exciting things would happen and the story would advance, I’m not saying it didn’t, but then it settle into a new repetitious pattern. Until a while later a new thing would occur to liven up the mix before, yep again, the tedium would strike.

And yet…and yet…I love seeing Temeraire and Laurence again. And watching Iskierka covet more shiny things for Granby. While listening to Temeraire and Iskierka snip at each other. All as this world has advanced with England facing new challenges and Napoleon busy making new alliances which could sway the ultimate course of the war. I have to keep reminding myself that in this reality, England might not win which keeps me more on edge than I would normally be in any book about these wars. We don’t know the outcome any more than these characters do while they’re living it.

The pairing of Rankin and his new dragon is alternately funny and maddening. The other new dragon in the covert opens interesting possibilities while adding spice to the mix of the aviators. You seem to love to shake and stir them all up. I can almost imagine you cackling with glee as you toss them on their heads. It’s good to see Tharkay carrying out his shadowy business even as he sticks a spoke into Rankin’s wheels every now and then. Plus Laurence is horrified to realize that Emily Roland is growing up and might soon be getting into all sorts of mischief. And oh the endless problems that Gong Su has trying to prepare tasty meals on the wing to tempt Temeraire’s refined palate when all he’s got are cassowaries and stringy kangaroos.

I do like how you have fun with Australia by adding all sorts of problems for our intrepid adventurers to deal with. Wildfires, thunderstorms, bunyips, quicksand and the native population all cause havoc even before the group finally makes it to the coast and discovers what’s behind a lot of their traveling headaches. If I had to deal with what they do, I would never complain about 10 hours in the car and rest stop bathrooms again. The way you tantalizingly add to our knowledge of new parts of this world – such as South America or the Iroquois who appear to be having good luck with farm raising dragons among the Yankees – whets my appetite. The reappearance of old enemies in the story, such as how Napoleon is recruiting the Tswares and the Chinese are using sea serpents add new twists that keeps things interesting.

When the penultimate battle started, I was as sick as Temeraire and as torn as Laurence. I was also expecting something totally different from what I got. Here’s nineteenth century state of the art warfare against a people who ought to have been nearly helpless against it. Only they weren’t and as the tide of the battle swiftly, so very swiftly, changed I was reading in horror at the fate of those who thought they had things wrapped up before the first cannon was fired. The “up close” image Laurence has of the dying man meeting his fate will stay with me for a while in my nightmares. The sad trip of the Aerial Corps back Sydney would have felt like the retreat of a broken army. And then to face the departure of so many friends while being stuck on this island prison would test men less strong than Laurence.

Though the book doesn’t quite live up to the hopes I had for it, I still enjoyed it. I am still looking forward to what will come next and as so often is the case with this series, I haven’t got a clue what to expect. Will Laurence and Temeraire stay in Australia, build their pavilion and entertain Lung Tien Qian? Or will the lure of privateering win after all? Or will they travel to new places as they attempt to make their way in this world where they have no honor? I guess I’ll have to wait. But hopefully not as long this time.