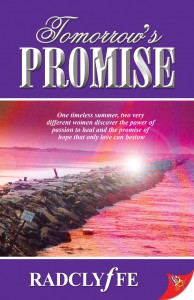 In the acknowledgements, you mention this book's "checkered past."   You declined to change a certain aspect of the story, opting to shelve the project for several years instead.   I'm glad you made that decision because  Tomorrow's Promise is all the better for it.   This is a passionate romance between two strong, wounded women, and I enjoyed it very much.

Tomorrow's Promise is set in Whitley Point, a secluded island off the coast of Maine, and opens with Tanner Whitley, troubled party girl.   Tanner is James Dean boyish, has a boy name, and acts like a bad boy hero.   She drinks too much and sleeps around with beautiful women.   Every so often, she shows up to work at the family business, but just for the sake of appearances.

Adrienne Pierce has come to Whitley Point for the summer to heal.   It's a huge spoiler to reveal the exact nature of her injuries, so I won't.   I will say that you handled the issue with aplomb.   Adrienne gives Tanner the cold shoulder at first, but she has compelling reasons for doing so.   These two don't rush the sex or the relationship.   Adrienne keeps Tanner at an emotional distance, even after their first sexual encounter.   As they begin to trust each other, and make intimate confessions, their connection grows.

You have a flair for dramatic dialogue.   I love angst and this book delivers it.   The attraction between Adrienne and Tanner felt very real, and the sex scenes are highly sensual.   I would call it a hot contemporary, which is one of my favorite types of reads. Both characters talk like women, interact like women, and touch like women. They communicate well, in and out of the bedroom.   That was refreshing!

For readers who might be hesitant about lesbian love scenes, these are tastefully done, with little or no graphic language.   I don't have problem with dirtier stuff, but the soft/sweetness fit this particular story.

What didn't I like?   The writing fell short for me.   Plentiful adverbs and frequent POV switches give the work a choppy, unpolished feel.   You reveal the thoughts of too many inconsequential characters, hopping from one head to another.   The style becomes smoother, and these flaws less noticeable, as the story progresses.

Although I wouldn't describe your writing as "good," from a technical standpoint, I can see why readers might find it addictive.   This story reminded me of a soap opera, with big emotions and torrid embraces.   The characters are likeable despite the clichés.    Tomorrow's Promise has a traditional, category romance appeal (minus the alpha male), and I'm interested in reading more of your books.   Thanks to Mfred for the rec.   B.

|   BN | Borders | ebook appears to be available only at publisher site