Your publisher, Sourcebooks Casablanca, sent out a review request for some of its late summer books, including The Great Estate, a historical romance set in Edwardian England. I decided to start with Thornbrook Park, book one in the same series,  since I like to read series in order. 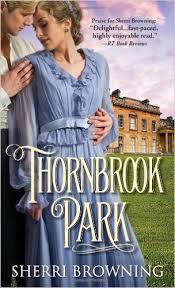 Thornbrook Park begins in September of 1906, with Eve Kendal’s arrival in England. Six years earlier Eve, an heiress, eloped to India with her husband, army captain Ben Kendal, against her parents’ wishes. Eve’s mother greatly wanted Eve to marry an earl, so her family’s response to Eve’s elopement was to disown her.

Despite his humbler background, Ben was determined to provide for Eve and he invested all their savings, but now that Ben has passed away, Eve has been unable to get her hands on the money. She has a small widow’s pension but has returned to England partly in order to find out what happened to the money Ben set aside for their future.

Luckily for Eve, a childhood friend, Sophia, now Lady Averford, has invited Eve to stay with her and her husband at their West Yorkshire estate, Thornbrook Park. Before departing for Thornbrook Park, Eve plans to spend her first night in London in Averford House, Sophia and her husband Gabriel’s London house.

At Averford House, Eve learns that Gabriel’s brother, Captain Marcus Thorne, is also in residence. Marcus is a veteran of the Second Boer War and an amateur boxer. Marcus lost his closest friend, Cooper, in the war, and now he tries to look out for Cooper’s widow and children, including his teenage son, Brandon.

After coming home drunk late that night from a bout of boxing he lost, Marcus passes out. Although she knows it’s inappropriate, Eve assists the butler in putting Marcus to bed, and Marcus gets a brief glimpse of her unforgettable blue eyes. But the next day, Eve is gone, the butler denies all, and Marcus wonders if he imagined the unknown woman’s presence.

At Thornbrook Park, all is not well with Eve’s friend Sophia. There is tension in Sophia’s marriage to Gabriel, and Sophia also has her heart set on a match between Marcus, her brother-in-law, and her sister Alice. But Marcus is on the outs with Gabriel and stays away from the country estate. Eve, who has some talent for writing, agrees to pen a letter that may lure Marcus to Thornbrook Park.

Eve’s written description of Cook’s apple tarts accomplishes that. Marcus comes to the country house, with a goal of finding young Brandon a position on a tenant’s farm to keep him out of trouble, and eventually moving Cooper’s entire family to West Yorkshire.

Eve begins to fall for Marcus, and he is equally drawn to her. Since his wartime experiences, Marcus has been plagued by occasional spurts of rage and without boxing for an outlet, he fears he will explode, but Eve helps defuse his anger at his brother.

But when Eve discovers it won’t be as easy to get her hands on Ben’s and her savings as she supposed, she knows she can’t afford to alienate Sophia, whose friendship has been so important to her and whose kindness now keeps a roof over her head.

Meanwhile, Gabriel and Marcus strike a deal—if Marcus courts Alice with an eye toward marriage, Gabriel will make it possible for Brandon to work on the farm, and perhaps eventually Cooper’s widow and children can all move there.

So Eve and Marcus each have a goal that makes their falling in love almost painful. Eve recognizes her feelings before Marcus does his own, but both agree on one day—just one day—to allow those feelings expression.

What will happen when Marcus realizes he has fallen for Eve? How will Sophia and Gabriel react if they learn the truth? And what is going on with Eve’s money? Is a mysterious man in a bowler hat out to harm Eve?

Thornbrook Park is clearly an homage to Downton Abbey, but at the same time, it is a historical romance, with a focus on one central couple’s romantic relationship and a happy ending. The novel is written in a lovely, elegant voice that is perhaps its best feature, along with the attraction between the appealing main characters.

Eve and Marcus are both class acts – caring, thoughtful and intelligent characters. The imperative to keep their feelings under wraps creates a beautiful romantic tension between them. Here is a sample that captures that tension:

One word, and she was lost. All fight and sense went out of her. She wasn’t sure if he had kissed her or she had kissed him, but their mouths were together, meeting hungrily. He slipped his tongue between her lips, and she drew on it, pulling him deeper. Somewhere, a service bell rang, an angry tinkling, but she was breathless in his arms, pressed up against the banister, his hands on her backside. What if Mr. Sutton came along? Or Brandon?

Before she could be persuaded to stay, she ran up the stairs and left Marcus standing there alone.

The secondary characters are also well-drawn, although one family member, Aunt Agatha, is a little silly. Agatha says she is in touch with the spirit world and while that adds an occasional light touch, it’s also a bit of an eye roller.

I really, really liked Sophia, especially after I found out her reasons for being intent on a marriage between Marcus and Alice. Gabriel (at least as viewed by Marcus) was somewhat pompous but I still want to read his and Sophia’s story.

The suspense plot was well-executed and I didn’t see its resolution coming as far as what had happened with Ben’s investments.

One thing that made for an interesting comparison to other romances was the servants’ prominence in the novel. Perhaps because of the Downton Abbey tribute, the presence of the servants was more felt here than in most historical romances, and this is more true to the reality of life in a great country house.

But there was a downside. Because unlike in Downton Abbey, here the servants didn’t have their own storylines, the result was some interactions which didn’t forward the story, such as Marcus telling the London butler that he left his clothes in a pile on the floor. There was also a plot turn involving one of the maids that I found unconvincing.

The Thornbrook Park housemaid, Ginny, sees Marcus and Eve together. She later tries to use this information to blackmail Marcus into sleeping with her. I thought this was a little absurd given that the reality of the class system was that servants were likely far more vulnerable to sexual predation from their masters than vice versa.

Eve and Ben had not had children in their six years of marriage and late in the book this led Eve to a decision I wasn’t keen on. The old “Since I can’t give him children, I should leave him for his own good.” This was followed by one of my least favorite tropes in romance, the miracle pregnancy.

It’s a huge credit to the writing that I was only slightly annoyed since this trope is usually a major irritant for me.

Thornbrook Park doesn’t have a strong narrative drive – I was able to pick up the book before bedtime, read for half an hour or an hour, and then stop when it was time to go to sleep – but I kept returning to it because the characters are so appealing, their feelings very romantic, and the writing well-crafted. Despite its flaws, I’m giving it a B and hope to read more from this author.