All things must come to an end. That includes your Women of the Otherworld series. I can’t believe it’s been over ten years since we were first introduced to Elena, the only female werewolf in existence. And while I’ve liked some books more than others, I still consider this series to be one of my comfort reads. It’s rare for me to find an author who fulfills that role for me so when I do, I tend to hold on with both hands through thick and thin. 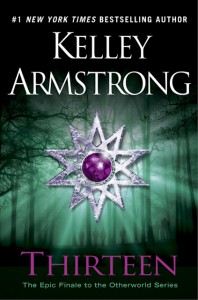 Not only does Thirteen wrap up the Otherworld series, it also concludes the three-book concluding arc featuring Savannah Levine. Introduced in the earliest books of the series, Savannah has grown up before us loyal readers. This has both its advantages and disadvantages. I’ve gotten the strong impression that I’m in the minority that likes Savannah as a character and protagonist.

I suppose I just understand the reason behind her personality, being the daughter of the infamous witch, Eve, and the Cabal sorcerer and leader, Kristoff Nash. Yes, she’s cocky and overconfident but it was only recently that she had any reason not to be. Before Savannah was de-powered at the end of Waking of Witch, she had serious firepower and has had it since she was very young. Growing up like that, in addition to bearing the weight of her infamous parents, I don’t find it surprising to see her turn out the way she did. So in a way, I consider these three final books as a way to bring about Savannah’s growth and force her into maturity regarding her powers.

With the previous books, Waking the Witch and Spellbound, my main complaint had been that they were noticeably set-up books. Sure, plot happened but as a reader, I was well-aware this wasn’t the final battle and that everything happening was only preparing for the endgame to come. Thirteen doesn’t disappoint on that score.

In fact, so much plot and story happened in Thirteen that I felt a little resentful that similar awesome shenanigans couldn’t have been included in the prior two Savannah books. Being the culmination of a long-running series where everything finally comes together, I’m deliberately vague so as to not spoil – because everything I could say about the plot is literally a spoiler. Suffice it to say, we see cameos from everyone, all the Otherworld heroines we’ve met over the years: Elena, Paige, Jaime, Eve, and Hope. Some readers may find this gimmicky or unsatisfying, especially if they dislike Savannah. I saw it as a way of saying goodbye to these women, and I liked that.

The main conflict in Thirteen is huge and a potentially reality-changing catastrophe. Laws of nature and magic are being broken and that’s never good. You know it’s serious business when both demons and angels are getting involved and trying to pull strings from the other side.

In terms of Savannah’s character arc, I liked the storyline involving Eve. Savannah never really got that relationship, so it was nice to see it finally happen even if it was only for a short time. On the other hand, I found the constant kidnapping to be irritating. Yes, they poke fun at it in-text but come on. And while I like the idea of Savannah being de-powered to cure her overdependence on magic and spellwork, I really did not care for the resolution of that plotline and how handwavy it. It was kind of a letdown.

Another staple of the Otherworld universe is Savannah’s crush on Adam Vasic, a half-demon and firestarter. Through the years, that crush has turned to love but because they became best friends along the way, Savannah didn’t want to jeopardize that and was willing to let that go. But the events of the past two books made it obvious that Adam reciprocated her feelings and in Thirteen, that relationship finally reaches fruition. I’m normally a huge fan of the friends to lovers trope but I was underwhelmed here.

I’ve spent a lot of time trying to parse out why. No matter how many years pass, I still find it cute when a young character grows up and finally catches her crush. And while there is an age difference, it definitely did not bother me here because in my head, I still see Adam as some slacker college kid even though he hasn’t been that in a long time. In the end, I think my feelings stem from the fact that while it was a fairly realistic portrayal of the dancing around friends do right before they become lovers, it was also a pretty undramatic rendition of it. Some readers like that but there’s a part of me that loves the dramatic, especially when it comes to storylines involving emotions and the heart, and this sadly did not do it for me.

And finally, I received a physical copy of this book from Penguin so I was able to read the extra story about Elena and the North American pack, “From Russia With Love.” In all honesty, I’m glad I did get this version because the book makes what I consider to be an odd choice by including the prologue to Bitten at the front of the novel. I, myself, was not a fan of that choice because as far as I’m concerned it didn’t add anything to the narrative’s presentation, but it does serve as a good counterpoint to “From Russia With Love” as the end. Looking back at it, I see them serving as bookends. As with many of the short stories set in the Otherworld universe, I wouldn’t call “From Russia With Love” a must-read but it does bring the North American pack into the future, so to speak. If you read the story, you’ll know what I’m referring to.

Overall, despite some issues, I found Thirteen to be a satisfying conclusion to the Otherworld universe. (On the adult side anyway. I know there are YA novels set in this world.) It was also nice to see the past heroines of the Otherworld universe. None of them are in the same places as they were in their respective novels, and I like seeing that progression of time and evolution of character. A part of me will miss this world as a reader, but nothing lasts forever. And while it is an ending, I don’t consider this the ending. As with all things, life goes on and Thirteen leaves us with the impression that the same holds true for the Otherworld characters even if we, the readers, will no longer be witness to them. And I think that is a perfect ending. B