REVIEW: The Theory of Deviance by Rebecca Grace Allen 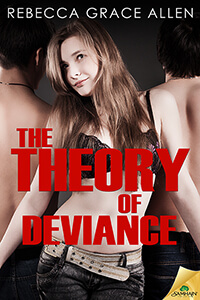 I was so excited when I read an early excerpt of The Theory of Deviance. I tweeted you to confirm that the story in fact was m/m/f menage (my favourite kind) and when you said yes and offered me a review copy, I snapped it up.

Mikey Pelletier is a resident of Portland, Maine and those of us who have read your other Portland Rebels books will remember him from a certain wedding where he stepped in to take some pictures at the last minute. Krissy, our heroine, also appeared in Jamie’s and Dean’s book, The Hierarchy of Needs (she was the younger sister of Jamie’s sister-in-law-to-be). In the earlier book, it was apparent that Mikey was deeply smitten by Krissy and the feeling appeared to be mutual. The Theory of Deviance begins when Krissy and her “roommate” are about to arrive for a week’s visit in Portland. They  have swapped their New York apartment for Dean’s and Jamie’s loft and Mikey can hardly wait to see her. He’s a little bummed about the roommate but thinks it will be worth putting up with her cramping his (nonexistent) style in order to have the pleasure of seeing Krissy again. He and Krissy have kept in touch but haven’t seen each other since the wedding. Was the spark he felt between them a symptom of the wedding magic in the air or can there be something real between them? Will he finally get rid of his pesky virginity? (Please God, he thinks, let me be rid of my virginity.)

And, it turns out, Mikey is religious. He’s an active member of his church and works with the youth choir. He helps in his parents’ landscaping and garden maintenance business for his job and he still lives at home at age 25. The Pelletiers are a somewhat prominent family in Portland and their reputation is important to him. When Mikey came out to his parents as bisexual, they urged him to choose to date only women because it would be so much easier for them and their business. Besides, if he can choose, he can date women, right? He doesn’t have to date men. (Fear not readers, the book does not leave this unexamined.)

As it happens, Krissy’s “roommate” is not a she. Rafe is a hot bisexual man and Mikey is having all sorts of feelings for him as well. This leads to a crisis of faith and eventually, pardon the pun, a come to Jesus moment when Mikey reconciles his desires, his sexuality and his faith, along with recalibrating his relationship with his parents. That’s essentially Mikey’s journey and, frankly, there’s probably enough there to fill out the story.

But you pack even more in to the book. Krissy has bipolar disorder and is struggling with the constrictions placed on her by her loving family. She has to call them every day and register her moods in an app on her phone. She has to take her medication. She has to make good decisions and not get sick again. Because when she got sick and was diagnosed, she scared her family badly and she scared herself. But she’s fine, right? She’s naturally bubbly and hyper – she’s not getting sick again. She’s sure of it. Everything is fine.

Rafe has a history of depression and when he and Krissy met while working on a play together (they are both actors), they bonded over their experience of mental illness. Krissy and Rafe are very close. They have a complicated relationship; they don’t have actual PIV sex but they are intimate. There is fairly convoluted justification for this which I didn’t quite buy.

Rafe is hoping that Mikey can be strong for Krissy and leave him free to pursue his acting career. Except he’s not really as cold-hearted as that sounds. There’s more going on. And, when there is a mutual attraction between Mikey and Rafe as well as Krissy and Mikey, plans are subject to change.

Most of the book takes place in only three days. When I realised this I was shocked actually because on page it felt longer. I was relatively comfortable with the decisions the trio made and how quickly they formed a strong connection but when I reflected on the short time frame and Krissy’s health, well, I did pause a minute and wondered why that was so.

On the other hand, there is just so much going on in the story, it’s hard to think that each big ticket item got the attention it deserved. Krissy’s bipolar disorder, Rafe’s ongoing issues, Mikey’s crisis of faith and his feelings about his obligation to his family. Mikey was very much cast in the role of carer for both Rafe and Krissy and I was a little uncomfortable with that. It is a lot to take on and I didn’t get a clear picture that he really knew what he was in for.

That said, Krissy is presented as a character who is more than a person with bipolar disorder and that Mikey is unfazed by her illness and far more concerned with how he could support her without limiting her was refreshing and welcomed.

Rafe perhaps got the shortest shrift in the story. His family background and his own history of depression were sketched out and some of his motivations seemed more about furthering the plot than anything else. In particular, the idea that Rafe wouldn’t have “sex” (I take this to mean penetrative sex) with anyone unless he was “in love” just seemed incongruous. As it happened, there was more going on there as well.

I liked the book very much. I enjoyed reading it and found it both moving and entertaining by turns. But when I finished it, I wondered whether I ought to have enjoyed it as much as I did. When I really thought about it, there were things which were underdeveloped and which left me with a mild discomfort that not enough serious attention was given to the weightier aspects of the story.

Still, I grade on how I feel about a novel, so I’m going with a B. Ultimately, I think readers’ enjoyment of The Theory of Deviance will largely depend on whether they are charmed by the dynamic between the three enough to overlook the shortcomings inherent in trying to do so many things, some of them perhaps deserving of more detailed consideration, in one 150 page book.

→ Kaetrin
Previous article: Friday News: Publishing post-Brexit, making book trailers, dangerous reading, and the history of exhaustion
Next Post: REVIEW: Next to You by Sandra Antonelli