REVIEW: The Way Back by Stephanie Doyle

I believe that this is the first book of yours that I have read but now I’ll definitely be on the look out for more Stephanie Doyle books.  Gabby Haines is a former host of Wake Up Philadelphia, the “hottest job on morning television in Philadelphia.”  She was replaced by a “younger, thinner, hipper version of herself.”  Gabby takes a job at McKay Publishing to pay the bills while she figures out what to do with her life.  As the newbie, she’s given the worst assignment.  Hunt down Colonel Jamison Hunter and twist his arm into writing the book that McKay had contracted with him many years before. 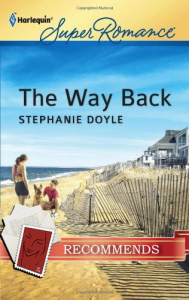 Colonel Jamison Hunter was once an American hero.  An astronaut, Hunter undertook an unauthorized space walk to repair the shuttle and save his crew.  His golden image became irreparably tarnished when he was caught in a motel room, half dressed with a woman not his wife.  The entire female population that had once idolized him felt like he cheated on them.  Gabby was twenty three when it happened and shortly thereafter found her fiancé in bed with her half-sister.

Gabby theorizes that she’ll overcome Hunter’s resistance toward publishing his story and become a writer.  Hunter is her ticket to a new life.  Hunter, of course, does not want to cooperate.  He’s tried to pay his advance back to McKay, has kept those advance funds separate so that he can finally convince them to just leave him alone, but he hadn’t bargained for someone as desperate and determined as Gabby.

The pace of this story is snappy, in part, I believe because of the good dialogue.  Gabby takes to following Jamie on the beach during his five mile morning run. The beach is public, Gabby thinks.  Jamie tells her that they can talk as long as she can keep up. In the beginning, Gabby can barely last two sentences before Jamie outpaces her.  But each day, Gabby gains a little more endurance and each day, Jamie’s admiration for her persistence grows until he wants her in a very real and intimate way:

“Yes. An off-island-nice-napkins-restaurant date. I’ll pick you up, we’ll ferry to the mainland and we’ll eat lobster. That kind of date.”

“A date so you can continue to seduce me.”

“Well, that is part of the purpose of the date and I’m not saying I won’t be trying the whole time. But also a date a chance to sit and talk and eat. Get to know each other. I don’t mention taking you to bed because it would be considered ungentlemanly, even though I’m thinking about it. And you don’t talk about the book that I’m never going to agree to write with you. A date.”

There is also a lot of subtlety here because while the story is about infidelity, a failed marriage, and regrets; it is also about acceptance, forgiveness, and overcoming one’s fears.  There is a lovely secondary romance between a young woman strongly connected with Jamie and the veterinarian.  Like Gabby, Zhanna has had a lot of loss in her life.  She, like Gabby, is scared to love because she feels she will only suffer loss.  Tom preserves to overcome that but ultimately both Gabby and Zhanna have to rise above their fears.

“I’m not going to sleep with you,” Zhanna blurted.

Tom straightened from where he’d been unloading the bag. He crossed his arms over his chest and ducked his head. “Is that what you think this is about?”

“Isn’t it?” She cradled the fuzz against her cheek and the animal purred so loud it shook. Zhanna would never tell him but she’d slept with men for worse reasons. Seemingly at a loss for words, he eventually burst out laughing. “You know, I suppose it is. I wanted to do something nice for you so you would like me. I want you to like me because I like you. And yes, I hope maybe someday you’ll like me enough to sleep with me. Who knew I was such a cad?”

While there was a strong focus on the term forgive, I really felt that the message should have been one of acceptance.  Gabby, in particular, has to accept the past and put it away and move forward to trust that what is offered to her is worth the risk.  Forgiveness is usually owed to those who have been harmed and Gabby was never directly harmed by Jamie. Instead, whatever man he was, she had to learn to accept and move forward.

Because he was everything to her. Everything she wanted to believe a man could be and he made her feel safe. Hell, she even felt safe right now.

“You were heroic. Smart and handsome, brave and daring. You were larger than life. But I also thought you still might be someone who a person could sit beside and have a beer with. You made me feel safe in a dangerous world.” She stared out at the night, a little too embarrassed by her honesty to make eye contact.  “Must seem silly to you.”

“It does. What you saw was a fake image of me. A caricature the news created. If they could have, they would have had me walking around like a damn superhero. But I’m not talking about that guy and back then. I’m asking, do you want to have sex with me? The man you’ve known the past few days?”

When I first read this, I thought that this was a decent book but when I read it again to write my review, I realized it was a much stronger book than I had originally given credit.  It has a strong secondary romance. It’s funny. It’s sexy. It’s emotionally touching.  My grade would be a B.  Did I say it was sexy and funny:

“Then think of me. And do sinful things to your body you think I might like to do.” She turned to him surprised to hear such naughty language from a man who had kissed her the way she’d always imagined Lancelot might kiss Guinevere. Then he wiggled his eyebrows like the dirty man he apparently was and made her smile.

“Jamison Hunter, you are a pervert.”

“Gabby Haines, all I can tell you is I’m going to have some pretty rocking dreams tonight.”