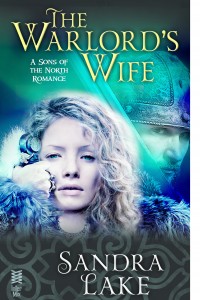 As a deep lover of Elizabeth Vaughan’s Warlords of the Plains series, I’m always on the lookout for stories that feature a fish out of water heroine trying to make her way. I read the blurb for The Warlord’s Wife and immediately requested it because it seemed just such a book. While it’s not really, what I found inside the covers was a truly entertaining romance that reminded me deeply of Johanna Lindsey’s older Viking books. Your book finds us in 12th century Finland and Sweden.

Lida was married just two short months to the love of her life, Urho, though she is several months gone with child when they marry. After Urho is killed in battle, his stepmother insists publicly that she is pregnant by another man and that she be expelled from their home for her “crime”. Urho’s father decides to send her home to her father, where she gives birth to Katia, her beloved daughter. Her family is prosperous enough, owning a farm, but everyone must work to keep their way of life. It is while she is the fields that she is spotted by Jarl Magnus, who is in search of a wife. Lida has absolutely no interest in marrying again, having been ostracized, beaten and expelled from her home the first time around. But Jarl Magnus is immediately attracted. He goes to her father and makes an ostentatious offer. Lida’s father loves her and has no desire to force her to marry. She’s very reluctant to leave her home, but realizes that the Jarl’s riches would greatly benefit her family. Plus, her brother is getting ready to come into power as her father steps down, and she knows that he’ll be less committed to allowing her to remain at home. So, she engages the Jarl in a negotiation for her hand, insisting that her daughter be permitted to travel with them. Magnus is enticed by Lida and finally allows her to win the negotiation, and they wed.

They travel to Magnus’s stronghold, Tronscar in Finland. Magnus is determined to get Lida pregnant as quickly as possible, and they have a genuine passion while in bed together. It is when they are out of bed that they struggle. Magnus has household staff who have kept his home for years, including Klara, who is domina of the keep. Lida is alone, except for her 8-year old daughter, and in desperate want of friends, so she befriends Klara. But soon finds that Klara’s machinations might mean the end of her painstakingly built relationship with Magnus. As she tries to acclimate to her new surroundings, Lida discovers that it’s not just her overbearing husband she needs to learn to navigate, but the treachery within his home as well.

Man, this was a fun book! As a young 12-year old, I cut my teeth on Johanna Lindsey, and this book reminded me so much of those experiences. You vividly draw a a proud, defiant heroine and an over the top (in a good way) hero. He’s overbearing, she’s determined to resist, but their attraction is too much. And she soon learns that he has a strong, honorable heart underneath all his bossiness. While there are a few things here and there that stuck out to me: anachronistic language, the 8-year old who tended towards plot moppetry, and a big bad who is EEEEVIL, I so enjoyed reading this book. The sex is fun, the sense of place quite well done and the story flows along quickly and in an entertaining fashion. While I’m not 100% convinced that this is a book that will stick with me for a long time, I really enjoyed your voice and more, enjoyed the old skool, Lindsey feel of your writing. The Warlord’s Wife gets a B from me.

→ Kati
Previous article: A culture of reading, or a culture of buying?
Next Post: Daily Deals: It’s the end of the world and so you need to buy all the books