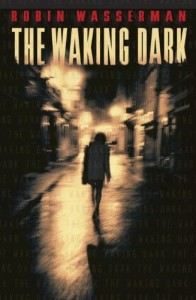 Even though there are so many YA novels coming out every month, I personally think there is a dearth of books in the horror subgenre. Yes, I know. Horror is out of fashion, having peaked in the late 80s and early 90s. But I loved Anna Dressed in Blood and wished there were more novels like that one. Alas, I didn’t even have much luck, not even with its sequel. So even though I was lukewarm on your previous novel, I decided to give your latest effort a try. It sounded like the kind of horror I grew up on and have missed all these years.

Oleander is a small Kansas town. It’s the kind of town where families have lived for generations and everyone knows your business. That all changes one day when, without explanation, five people go on homicidal rampages. We’re talking opening fire on the customers in a drugstore, running someone down with a car, and crucifying a parishioner and setting a church on fire. Four of those people killed themselves. The fifth tried but failed. She’s now locked up in what she believes to be a high-security mental institution.

One year after that fateful day, Oleandar has settled back into a — while not entirely normal — regular routine. Unfortunately the events of that infamous day come back to haunt them when a tornado tears through town and reveals its secrets. As Oleander descends into madness, only five teenagers are left unscathed, wondering what is happening to their relatives and neighbors. What do they have in common? Four of them are each the sole survivor of the rampages from one year ago, and the last is the lone perpetrator who survived.

Readers who love Stephen King and his brand horror and are interested in a YA take should absolutely pick up this book. The storytelling style is strongly informed by his books, right down to the retrospective narration of the characters:

Later, after he’d trashed his bloody clothes, and stood under the cold shower long enough that the water circling the drain had gone from red to pink to clear, Daniel Ghent would wonder if some part of him had known what was to come — or should have. If there had been something false, something crafty, in Gathers’ crookedly welcoming smile, or some too-still quality in the air, like the pressure drop before a storm. He would wonder if there was some reason he had walked into the store on exactly that day, at precisely that time, if despite all previous indications to the contrary, he had been meant to be a hero and save the day. He would wonder whether, if he had seen it coming, he could have done something to stop it, or whether he would simply have backed out of the store and run away. But that was later.

For me, this is what horror is. It’s not the violence and gore — though that certainly can be present. It’s the dread of what’s to come. It’s the tension that increases with each second as you wait for the axe to fall.

The classic staples are all here. Small town. Ragtag band of unlikely allies who, in each their own way, are outcasts even if it’s not immediately obvious. An inexplicable madness sweeping over a town, changing its inhabitants — or revealing their true natures. A mysterious government agency who may or may not be involved. In another book, these elements could have been cliche but they worked well here.

People used to the deep introspective characterization of many YA novels might be taken aback by the distant POV here. It’s not entirely omniscient but it’s close. Again, I thought it was well-done and suited the style and tone, but it’s not every reader’s bag. Subtle, multilayered characterization is not this novel’s strength but it’s also not the point. I wouldn’t call the character’s shallowly characterized because the way everyone changed after That Day and when the tornado tore up the town, told me a lot about these people.

At its heart, The Waking Dark is a novel about the darkness that lurks within all of us, just waiting to come out. In many ways, I thought the concrete explanation behind Oleander’s disintegration was a little too neat, a little too handwavy. Part of that is because up until that reveal, the novel had been grounded in solid reality, with everyday mundane explanations for the horrible things that happened. Everything was possible in real life without the help of any outside paranormal force, so the true cause jerked me out of the book.

But as Jule, one of the core group of teens, says: It’s easy to blame that outside cause. To place entire blame at its feet. In that way, people can absolve themselves of their guilt and pretend they bear no responsibility for their actions. But what if that cause doesn’t make people do terrible things? What if, instead, it simply lifts the inhibitions and morality that prevent people from doing awful things? In the end, it’s still your finger that pulls the trigger, not some mysterious paranormal force. That’s the question. Which is stronger? Impulse or morality?

Having been disappointed by recent YA horror before, I approached The Waking Dark with cautious hope. I’m glad to say it exceeded my expectations. Because of this book, I’m looking forward to future novels and excited to see what the future may bring. I recommend The Waking Dark to all horror fans and especially to lovers of Stephen King. There’s a good chance you’ll enjoy this one. Oh, and don’t worry. Despite what I said earlier about gore and violence not necessarily being the defining traits of horror, like many Stephen King novels, the body count is very high. B