REVIEW: The Summer of You by Kate Noble 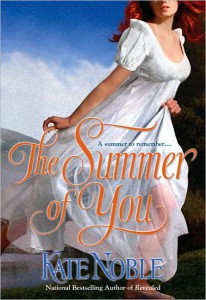 This is not a flashy book. There is no big mystery. No serial killer running amok. There aren’t numerous romances started in this story to be carried out into the next. It is just about people trying to cope with the every day aspects of their lives within the walls that those around have built.

Lady Jane, for instance, is known to be a frivolous girl interested in the latest parties and dresses and full of gossip. It is easy to dismiss her as a lightweight, and at some point of her life, the games provided by high society meant everything to her. But now the parties and dresses and gossip are a release. Her mother has died and her father, the Duke of Rayne is sliding into dementia. Jane doesn’t know what is going on with her father, only that he often fails to recognize her. He is forgetful. He sometimes mistakes her for his wife. His behavior is erratic and knowing his pride, Jane has to work hard to keep him confined to the house and engage trustworthy physicians to examine him. Yet those physicians have no answers.

Her brother, Jason, ran off to the continent with a bunch of friends a year ago and Jane has had to deal with her father’s illness by herself; keeping him away from the public, shielding the family from gossip, and struggling to be responsive to the estates’ demands. Who wouldn’t want to spend a bit of her free time trying to enjoy oneself? But the excitement of London has worn off on Jane.

Jane and her brother agree, for their father’s sake, to retire to a country home in the Lake District. Here Jane isn’t the queen of the society like she is in London. On her first full day of social calls, no one can help but mention how grown up she seems since that time when she was five and ran naked in the square.

"I swear to you, Lady Jane, it's the most scandalous thing to have happened in Reston since you ran round the square naked as a jaybird when you were but five!" Lady Wilton laughed.

Jane forced herself to smile serenely. She hated that story and only had a vague recollection of actually doing it. But she knew that in Reston, it was the first thing anyone ever said about her. She could have all the Town polish in the world; it wouldn't matter. Here, she would always be five and naked.

Also in the country hiding out is Mr. Byrne Worth who, oh so coincidentally is the brother of Marcus Worth. Marcus just married Lady Jane’s on again, off again, friend. Their exchanges early in the book are peppered with sniping and pettiness ("So sorry," Phillippa sniped, "I haven't kept up with your preferences-‘next time I'll plan my wedding celebration around your likes and dislikes, shall I?") in amongst the friendly exchange which is just another reason why I like this book. The women are given free reign to be not nice at times.

The small community in the Lake District which surrounds Jane’s home is vividly drawn. It is as much of a character as Jane and Byrne. Mr. Worth is looked upon with suspicion by the district because he hasn’t allowed anyone to befriend him. "Repugnant-‘never even came to one of the assemblies!" is the description given by one of the townspeople. In fact, his curmudgeonly and secretive ways have caused the locals to peg him as the local highwayman, and not in the romantic swoony sense of the word, but the “rape and pillage the village” sense of the word.

Jane knows that this cannot be true and delivers a welcome basket to him. “I’ve received welcome baskets like that, Lady Jane.” Byrne replied, finally turning from her and crossing the threshold into his house. “They usually contain more probing questions than they do jams and jellies.”

But the townspeople can hold their preconceptions for a long time. At one point, Lady Wilton notes that Jane has always has a propensity for “debauched wildness” beginning with her public nudity at the tender age of five.

The truth is that Byrne could not have cared less what the villagers thought of him because Byrne, himself, had such low esteem. There were dark periods in which he didn’t think he was worth consorting with either, periods marked by heavy use of opiates and thoughts of ending his own life. He wasn’t up to putting on the artifice that town interaction required. It was easier to snub than to participate.

In each other Jane and Byrne find that there is no prejudgment. Jane is not the naked five year old and Byrne doesn’t have to be anyone but a man with a wound. Byrne is someone she can rely on and Jane is someone with whom Byrne can confess his secrets.

There’s a lot more to the story that just Jane and Byrne. Much of the secondary plot lines are about stripping away artifice. Jason has to give up playing the careless nobleman. A young girl sees that her crush has no substance and the town, the pretty polished town, has some dirty secrets. Jane and Byrne grow on you, slowly and surely, and at the end, you can’t doubt that these two are meant for each other. B

I should add I was told that there are many a historical inaccuracy in this book but I am a dummy when it comes to that sort of thing so unless I know something is terribly wrong, I never grade down for that in a historical.

This is a trade paperback and its digital price is set by the publisher who is one of the “Agency 5”. I could not find a legitimate e copy of this book. Mobipocket has it for $15.00 and Diesel for $15.00 with $.53 off your next purchase.