REVIEW: The Slipstream Con by S.Reesa Herberth and Michele Moore

For three years, Kellen Frey has led bounty hunters Tal and Vanya on a merry chase, evading capture with flair and style. Now, just when they finally have their pet project–and object of their mutual fantasies–cornered, the elusive con artist turns the tables and gives himself up. A sudden attack of conscience, perhaps? Tal and Vanya know better.

Their suspicions are confirmed when a crime lord comes dangerously close to killing them all, and the rapidly sickening thief is forced to confess the truth–he’s been accidentally dosed with a highly illegal form of nanotechnology.

If Kellen can’t get his hands on another dose, he’s finished. The problem is, the only thief who’s ever broken in to Slipstream Labs is his ex-girlfriend, and she’s allergic to bounty hunters. As he does his best to play both sides, he struggles with his growing desire to be more than a prisoner to Tal and Vanya. Without trust, they won’t survive long. The clock is ticking as they race to uncover a conspiracy that spans the Ylendrian Empire.

Warning: This book contains an anti-hero with no qualms about redecorating your spaceship, a heroine capable of killing you with her hair stick, and another hero who would like nothing more than to shag them both without the inconvenience of a conscience.

Let me say this upfront – I usually do not read m/f/m ménages, because I dislike the set-up from get go, but of course there are exceptions to every rule. I thought I would share  *the only* novel with this setup (literally – I read two more historical ménage stories that I liked but nowhere near as much as this one) that I actually loved. 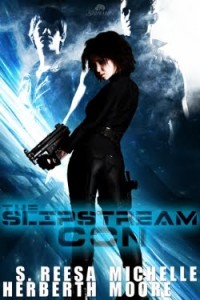 I would classify it as a space opera romance with strong scifi elements, but of course opinions may differ on this one. This book has my favorite type of the chemistry between the leads: although there are no explicit sex scenes in this story the book was bursting with eroticism. The touches, the few kisses, certain explicit drawings, constant teasing between the three characters (yes, despite Kellen being their prisoner for most part of the book they do tease each other a lot and I thought it was totally appropriate in the context of the story), all these things brought me to the point where I was thinking how much I wanted them in bed and NOW. I did not mind that I was left to imagine all the details which would only happen after the book was finished.

“There were two plates set out on the table, and a note between them.


Just turn on the warmer for a few minutes. It should reheat well – KF.

Tal looked because breakfast was breakfast and the damage was done. Scrambled eggs and pancakes in the shapes of hearts. Hearts.

A few short, stomping steps took him from the galley to Frey’s cell. He didn’t expect to find him there. The man had obviously gotten himself out, why would he go back? Frey in the cell, however, wasn’t as unexpected as the bars now painted across the glass wall.

Their prisoner-cum-chef had found the bag rescued from the ship, because Tal knew that Vanya didn’t own a pair of shorts in that eye-popping green-and –purple-paisley pattern, and they sure as hell weren’t his. Some sort of soft, clingy fabric fit his ass perfectly where he was curled up on the bunk. Tal gave him a hard mental shake, forcing his eyes to the keypad.”

I strongly suspect that one of the main reasons I loved this story so much was Vanya. Yes, she is beautiful and dangerous – women in scifi and urban fantasy often are – but she is also honest and funny. More importantly, she felt to me to be a very real person, who is extremely capable in what she does, but who is also good at sharing stuff with the person or people she loves. I loved that for the people she loved Vanya would not mind bending her “moral compass” to a certain degree.

Tal was probably a less complex character than Vanya, but I still really liked him. I think we were supposed to see that it was a little harder for Tal to bend his “moral compass “for a thief than it was for Vanya considering her past profession. Despite that difference in their backgrounds (and we only hear about Vanya’s past profession, we do not see her doing stuff in the past), I really thought that these two dealt with “Kellen’s dilemma” in a very similar fashion – being very honest with each other. They behaved as I would hope a lot of adults would behave and in many ways it was a very nice and refreshing thing to read about.

One of the reasons why I do not really care for ménages (I have read and loved m/m/m ménages, but I am also not on the lookout for those books specifically) is because more often than not I find the interpersonal dynamics in those books to be awkward. Either I feel that one person is an odd man out, or I am just not convinced that all relationships between each of the participants are equally important.

Here, as the blurb tells you we have a couple who is very much in love. Both partners develop an obsession/attraction to Kellen and I still was absolutely convinced that if they could figure out the way to trust each other, they would work out as a trio for the long years to come.

There is no angst between Tal and Vanya at all. There is no angst about their relationship or their sexuality (both of them are bisexual and Vanya had a very serious girlfriend for several years before she met and fell in love with Tal. The girlfriend plays a small but very important role in the story). They really do not angst about anything, even about their attraction to Kellen. The main issue for them is Kellen being a thief and them being bounty hunters. I liked how this caused some soul searching but was resolved in a believable fashion, for me anyway. The conflict in the storyline is not about the third person in the relationship, it is not about including specific person Kellen Frey in the relationship, but it is about including in the relationship with somebody who is an art thief and who is wanted by many governments

Kellen probably does a little bit of angst, but really not much. In those parts the book takes a touch of a darker tone, but I thought it was no out of place with the rest of the story. I liked how Kellen was reexamining his motivations, why he was doing things, but not what he was doing. I mean at the end of the book I believed that he would not continue being a thief, but I liked that he did not do it because he was suddenly sorry about being a thief if that makes sense. I liked how the authors made him so sympathetic to me, without making him innocent. I liked how the master manipulator needed to learn to trust and loved how his vulnerabilities made him even more likeable for this reader.

As you can see from the blurb this book also has a fun and exciting action/adventure plot. I thought the book was paced well. The writers managed to make me so engrossed in what was happening that I completely suspended the disbelief as to couple things (not many) and went along for the ride. There was something about the bad guy that made me a touch confused when it was revealed, but overall I thought the ending was very satisfactory. B