After reading the very compelling Heat, I had to pick up another one of your books. While I mentioned that Olivia was not for me, you commented that I might enjoy The Scholomance. I purchased it and it was highly enjoyable, but not in a fuzzy, feel-good sort of way. I think this was more an admirable, fascinating book more than anything else. I’m not sure I loved it, but I enjoyed the read immensely. The Scholomance is, like your other books, a very multi-layered story. On one level, it’s about friendship in the face of adversity. On another level, it’s a discovery story, and all of this is set amongst a dark, grim, incredibly detailed world. Much like Heat, the blurb and cover of this book simply do not do it justice. 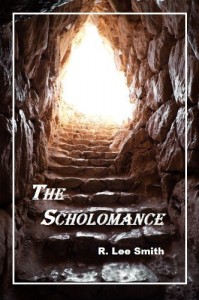 The book starts out with Mara. Mara is the caretaker to her mother, who is suffering from bouts of insanity. Her father, a womanizer, is long gone. Mara herself is different from most. She is very pale physically, almost colorless, and possesses extremely strong psychic powers. She can hear the thoughts of others from a very early age, and this has made her very jaded about human nature. She knows that people lie, cheat, and deceive because she can hear their every thought. It has also made Mara a rather proud woman, because she has these gifts and it sets her above others. It also makes her very, very lonely.

Despite being very strong and cold, Mara has one single friend, Connie. Connie is not spectacular in any way, but she adores Mara and wants to be just like her. Connie grows obsessed with the legends of the Scholomance – a school where demons teach others how to use magic. The cost of such a school is that one of every ten students does not make it out alive. Connie doesn’t care, and she goes to the school anyhow. Two long years pass, and then she sends Mara a note – to please come and get her. Mara goes to retrieve her friend, but entering the Scholomance means entering the school, and from there, Mara’s world is turned upside down. The Scholomance is full of a variety of demons who teach different arts. The school is also full of students who have become craven and aggressive in their pursuit of either escape or mastery of the dark arts. Mara must deal with both if she has any hopes of finding Connie. That is just the tip of the iceberg of the story. I feel as if any sort of summary will not do the book justice.

Mara is a hard heroine to relate to, in the beginning. She’s cold and unfeeling. She’s single-minded in her pursuit of Connie, while resenting Connie for sending her on this task. She’s haughty and thinks that others are beneath her. Above all, Mara is careless with others and deliberately ignores their desires if they conflict with her own. I likened Mara to a sociopath heroine, and I think it’s a good descriptor. Mara sees the emotions of others but doesn’t understand them. She uses them against people to get what she needs out of them. She’s not above using her body (and she does repeatedly) in a very clinical, unattached way, simply to get what she wants. It is a means to an end to her, and if that means seducing a man and then betraying him, she has no qualms about it. Sometimes hard, aggressive, self-reliant heroines are hard to find, but Mara is a superb example of a heroine who is not likable or admirable in the slightest, but utterly compelling. I really appreciated the nuances of Mara’s hard, brittle character even if I didn’t like her.

The supporting cast of characters and the school themselves are just as compelling. The world that you built inside the mountain is dark and grim and magical, and the scope is impressive. Every teacher at the school is a unique demon that is completely different from the rest, and the way they deal with the students unique to their different talents. I thought you did a really great job with the demons in that they were never once anything but utterly demonic. They looked unnatural and inhuman. They acted inhuman. The students were there at their whim, and they used them as I imagined demonic tutors might.

The students were equally foul. They dubbed themselves as either ‘lions’ or ‘gazelles’ in how aggressive they were. The feeding tables were described in great, revolting detail, and yet ended up being so very telling of the plot. Mara’s disdain of her fellow students echoes the reader’s distaste for them, and it is not hard to see why each of these people has shown up in a school for black arts. They are not nice people, and they’re not just token awful. There are some truly terrible people in the Scholomance. But this is Mara’s story, and it’s very interesting to watch Mara learn to deal with the other students and interact with them.

Overall, a really fascinating book. It’s very dark and grim, though, so I feel the need to warn people yet again. There is sex in this book (though not as much as Heat) but nearly all of it is not in a loving capacity. As I mentioned earlier, Mara is not above using herself and others to get what she wants. Most of the sex is of questionable consent, and most of the people Mara has sex with are not all that human. There is also a lot of torture and murder in this book. On the other hand, it’s intricately detailed, filled with very different characters, and I found the entire thing hard to put down. You do feel for the characters. You want Mara to succeed in finding her friend, and finding herself in the process.

In short, it’s what I’ve come to expect from a R. Lee Smith book. There’s even a romance, though it’s not the driving focus of the plot. And the ending…I have to say that I teared up. You do endings really well.

Lest this be all glowing praise, this was not a perfect read. It’s very dark. It’s a very dark book about very dark people who do grim and nasty things to each other to further their own wishes. There was not one person in the story I could say I ‘liked’, though I appreciated all the characters and found them compulsively readable. The romance could have had a larger starring role, but because of Mara’s character, I thought it played out the way it had to. The book was also a little long. All your books are. This one is nearly 9000 locations on the kindle. And while I enjoyed the first 50% quite a bit, I felt a little impatience in the second half that things were not progressing faster. That’s not the way you write though. I think your books are more like the slow unfurling of a ribbon, and every page and plot nuance will be necessary down the road. I think it’s more reading fatigue more on my part than a flaw in the story. I’ve read 2.5 of your books in the past few weeks and it’ll probably be a month or two before I try the next, though I’m certainly game for it.

You make me think of Christopher Pike in a sense that I pick up the book expecting one thing and by the end of the journey, it’s a completely different, totally bizarre sort of book. I never know what to expect and I find that I enjoy that quite a bit. Not as romantically compelling as Heat, but just as crazily fascinating for many different reasons. I’m going to recommend this one for those that are looking for a different sort of read and aren’t afraid of darker stories. I have to say that I’m really enjoying your books. An easy B from me.

PS – I still don’t like your covers but I don’t know that something lurid would fit it better. So perhaps a vague cover is best.