REVIEW: The Royal We by Heather Cocks and Jessica Morgan 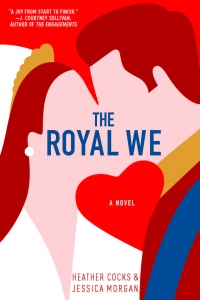 I’ll be honest, I love you guys. I read your website religiously, and look forward to any awards related ceremony for your hilarious fashion commentary. All that being said, I’d have read this book even if it hadn’t been by you. I’ve been a Royals watcher since Lady Di and Charles and have always had a really warm spot in my heart for all things Windsor. So the premise of your book, an American girl falling in love with the heir to the British throne, is right up my alley.

Rebecca Porter has decided to take a year abroad. She thinks of herself as the “lesser” of the Porter twins, her sister Lacey being more beautiful, accomplished, more…everything. Bex has followed Lacey everywhere, the two epitomizing the “twin-mind” that many twins share. Lacey is going to be a doctor, while Bex is an artist. She decides to jump at the chance to spemd a year in England studying at Oxford University. Her first night there, she arrives at Pembroke House in a very British downpour and has the door opened for her by a remarkably cute guy. Clearly not the porter she was expecting, but he gamely shows her to her room, and takes his leave. Shortly thereafter, Bex is informed that the cute guy is Nicholas Wales, otherwise known to the entire United Kingdom as His Royal Highness, Prince Nicholas.

Bex is very quickly indoctrinated into a small club of friends who circle in Nick’s orbit. They protect him from curious onlookers, they shove off girls looking to score with a Prince, and they act as his confidants and allies. At first, Bex and Nick don’t really get to know each other. While he is a student, he is also a member of “The Firm”, which means he has various duties related to his family that he must attend. But when she discovers that they share a love of terrible television series, Bex and Nick begin to bond. And as they bond, they develop a friendship. Soon that friendship leads to attraction, and the two fall in love.

But that’s really only the beginning of the story. It’s no small thing to fall in love with the man who will inherit the throne. Nick seeks to protect Bex from the incredible scrutiny that comes with being involved with his family, and keeps their relationship under wraps. This goes on for a long time, and the strain of pretending that they barely know each other in public, and seeing him escort other, more “appropriate” women to events ends up putting a horrible strain on their relationship, so much so that it finally breaks. Will the two be able to find their way back to each other? Or will the pressure of involvement with a Royal be too much for Bex to bear?

I really enjoyed this book. The story is told in the first person, by Bex. And it is her sensibility and growth that make the story so compelling. She truly is just a regular girl at the beginning of the book, and as she and Nick fall in love, break-up, and reconnect, we see a marked growth from girl to woman. The story features fabulous secondary characters, not the least of whom is Nick’s younger brother, Freddie, who is a total lady killer, and ends up being Bex’s closest friend. Her relationship with her sister, Lacey is also beautifully drawn, as one twin eclipses the other, and that friendly rivalry grows into something more insidious. The book reads very much as a Chick Lit/New Adult book, and is funny, heartbreaking and in the end sweet. It captures a wonderful fantasy of marrying Prince Charming, but also lays out the kind of sacrifice that comes at the hands of being with that same Prince. It helps too that the book is very clearly based upon the relationship of Prince William and Kate Middleton, though Bex is American. My familiarity with the Royals absolutely enhanced my enjoyment of the story.

I really admire the steadiness of your authorial voices. I wasn’t exactly sure how your blogging voice would translate to writing books, but the story is endlessly entertaining and really fun. In the end, I enjoyed every moment of reading this book. I think it makes a terrific beach read for those looking for something frothy and light to read.  The Royal We gets a B from me.

→ Kati
Previous article: REVIEW: A Dance with Danger by Jeannie Lin
Next Post: Daily Deals: A highly regarded urban fantasy, a couple of romances, and a mystery–of sorts