REVIEW: The Return of Jonah Gray by Heather Cochran

One of our readers, Emily, recommended “The Return of Jonah Gray” to me when I’d reviewed another book which features an Internal Revenue Service heroine. After reading the first two chapters of your book at Amazon, I was hooked on the heroine and her sense of humor (must just be the IRS as a whole that doesn’t have one). After reading the whole book, I’m hooked on Sasha Gardner and, surprisingly for a hero who doesn’t actually show up in person until near the end of the book, Jonah Gray. I might have even made up a fictional persona to get to know him more too.

“Despite being attractive, intelligent and friendly, Sasha Gardner knows no man wants a phone call from her. Because Sasha is a tax auditor for the IRS.
Every job has its downside. Auditing may interfere with her social life, but it’s orderly. It makes sense. And she’s very, very good at it. But when unexpected complaints draw her into the tax return of a man she’s never met, nothing seems to make sense anymore.

Using the information in Jonah Gray’s return, Sasha begins to assemble his life story: a rising career as a respected financial reporter, a house in a posh seaside village, weekends sailing the coast-it all reads like a life Sasha herself had dreamed of living, down to the guy’s itemized deductions. So why had he left it behind to cover school-board meetings in a one-newspaper town?

What begins as a welcome distraction soon becomes a search for answers. Sasha knows it’s ridiculous-she’s never even laid eyes on him-but she wouldn’t be the first woman to fall for a man who looks good on paper.” 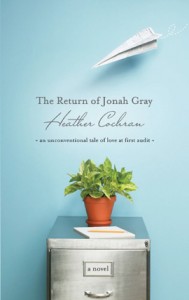 By August, Sasha generally has a stack of files of tax returns building up on her desk so when she starts getting irate phone calls from total strangers – all knocking her profession and urging her to show a little compassion for someone named Jonah Gray, she hasn’t the slightest idea whom they’re all referring to. Only that this Jonah Gray has got a lot of friends and they’re all mad at her. Once she fishes his return out of the heaps awaiting her attention, she starts to delve into it and discovers a lot about him – knowing what to look for can unlock a person’s entire life to an IRS auditor. But something makes Sasha dig deeper and soon she’s almost obsessed – not creepy obsessed but focused obsessed. Here’s a man who had a job with a prestigious newspaper, a nice home in a tony area in NoCal, a sailboat just like her family used to have (and that she’d loved) when she was a teenager and for some reason he’s given it all up to move to tiny, rural Stockton, write newspaper articles on spray painted cows and run a gardening blog. What gives?

Learning more about him and trying to discover why his return was flagged for an audit also revives her flagging interest in her job. Up til now, she’d been one of the best auditors there but lately she can’t summon enough interest to care. And then the bomb really drops on her when her father’s cancer recurs and it quickly becomes obvious this time it’s terminal. Add to this a possible romance with an OCD archivist at her office and Sasha’s plate is full. But there’s just something about Jonah Gray, whose voice wraps around her like a warm blanket and whose blog followers describe him as “one of the good ones” that won’t let Sasha put him out of her mind.

At times I did worry that Sasha was getting a touch beyond interested in Jonah – not that I might not too since he sounds delicious as well as kind, concerned and like the type of person who’d give you the shirt off his back. What the hell was his first, thankfully now departed, wife thinking? As all his bloggers – whose plants he’s helped to save or whom he’s gotten to accept that eventually all plants go to heaven – say, he’s a keeper.

But a romance in which the heroine and her eventual hero don’t meet until less than ten pages from the end? I mean this is taking chick lit standards to the extreme. Yet, it works. Between the phone calls, and the letters and the blog posts and the journalist’s articles of Jonah’s that Sasha reads, he’s almost as much a presence as she is. And he’s far more interesting than Jeff the compulsive archivist who never did seem to “get” the type of humor that Sasha and Jonah share.

As much as I was impatient to finally see Jonah get some page time with Sasha, I became sucked into her private life and the family issues and dynamics that have shaped Sasha and which were at times eerily paralleled in Jonah’s life – the parents he had trouble sometimes getting along with, the aging father with health problems, the missteps in his love life, the way plants kept cropping up – you did a good job keeping me interested in it all and winding the threads of their lives together in a way that shows how ultimately compatible they’ll be once they finally meet. I also like the way that Sasha’s family isn’t perfect and at times struggles to deal with what’s going on and each other. It made it all seem more real. Sasha’s best friend Martina is a hoot too and it’s nice that she and Sasha’s newly rediscovered half brother look to have a future.

The book definitely has its sad moments but life has those too and it makes the book so much more realistic and readable. The easy flow of your writing and the story kept me reading and gently floating along as it all unfolded. I love books where I look up and realize I’ve just sucked down 75 pages in an effortless gulp and then am eager to dive right back in for more. No, I wouldn’t want to get a letter saying Sasha was about to audit my tax return but I did enjoy spending time with her as she (maybe) finds her Mr. Perfect.