REVIEW: The Restorer by Amanda Stevens

I don’t often read many thrillers, but I picked up a previous novel of yours a couple years back. In fact, I think I may have reviewed it here on DA! (Yup, I did.) Although the details of the book have long since become fuzzy, I do remember having a generally positive reaction to it. So when I found your latest novel in a recent package from Jane, I was hopeful. More so when I discovered the premise of your new trilogy. (Why is everything a trilogy these days?) 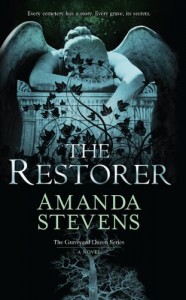 Amelia Gray is the Graveyard Queen. Like her father, she has the ability to see ghosts. This is something of a family secret, in that they don’t share the existence of their abilities with her mother. That said, I have my suspicions that she knows something’s up. Amelia’s father was a cemetery caretaker and Amelia herself grew up to become a cemetery restorer. Some people may find this morbid. I find the unusual occupation interesting (though I admit I’m also a bit morbid myself), but I do wonder about the choice to work in cemeteries when you can see ghosts!

Thanks to her father, Amelia follows a set of strict rules when it comes to ghosts. The main one is to pretend you don’t see them. In the world of The Restorer, ghosts are parasites that feed off the life force of the living. If you acknowledge their presence, they will attach themselves to you and it will be near-impossible to get rid of them. As an extension of this rule, she also makes a point to avoid people who have ghosts attached to them. After all, to become attached to someone who has ghosts attached to them means that you are in effect inviting those ghosts into your life. Until now, Amelia’s life has been carefully constructed to minimize ghostly contact.

That all changes with her latest project. Amelia has been hired to restore an old college graveyard that’s long since fallen into disrepair. No big deal, right? But shortly after Amelia starts the project, a young woman’s corpse is found in the graveyard. The investigation slows down Amelia’s work, much to the displeasure of her client, but matters take a turn for the worse when more bodies are found. And unfortunately for her, clues rest in the symbolism on the headstones located near the corpses, which means Amelia’s help is needed to identify and catch the killer.

I really enjoyed reading about a protagonist with such an unusual occupation. How often do you read about cemetery restorers? Amelia even had a blog that’s gained her a cult following that’s dubbed her the Graveyard Queen! I couldn’t help but find that cool. It’s not that I’m hating on characters with more everyday occupations, but it’s nice to read about something different once in a while. It added something to a novel that already had a spooky atmosphere to it. I loved that aspect.

I do still wonder about why someone who makes a point to avoid ghosts would work in a place sure to have at least one though. From what I understood, hallowed grounds are special (Amelia is safe from ghosts on hallowed ground) and not every graveyard has them. I’m also anxious to find out more about Amelia’s family. It’s obvious both her mother and aunt know more than they let on, and that her father is keeping more secrets from her, ones that would probably benefit her if she knew. Family secrets intrigue me so I hope more of this is addressed in the next two books.

Amelia’s relationship with Devlin was interesting, although I found Devlin something of a cipher. That probably couldn’t be helped since the narrative is told through Amelia’s first person perspective, but he was tough to figure out at times. I think I find myself more fascinated by Amelia’s interactions with Devlin’s ghosts (of his wife and daughter). It’s interesting that they knew right away that she could see them and that the daughter tried to interact with her. I’m also curious about the reasons why Devlin seems to drain Amelia’s energy in a similar way that ghosts are supposed to drain the people they attach themselves to. I suspect this will become more of an issue in the following books as Devlin will have to choose between the living and the dead.

The mystery itself also held my attention. This wasn’t a case where I could immediately identify the culprit. It took me nearly until the end of the book to figure it out. I’m sure readers more well-versed with mystery tropes will have an easier time than me. In some respects, the circumstances surrounding the killer and the motivations behind why they did what they did seemed a little far-fetched and convenient, but I am curious to see what happens next. Amelia can’t go back to the way she was before — not with her feelings for Devlin who has two very determined ghosts attached to him, not with the surprisingly high body count among her friends and colleagues, and not with the mystery of her family. I’m curious to see how the events of this book change the relationships with her friends and family.

I found The Restorer to be an atmospheric and creepy read. Horror aficionados like me will probably enjoy that quality of the book. But for those readers who shy away from horror and its various incarnations, don’t worry. It’s a mild sort of spooky, nothing extreme or explicitly gory. (The way the murder victims died wasn’t pretty, but it wasn’t described in detail.) I thought this was a good start to a trilogy, and I look forward to more of Amelia’s adventures. B