REVIEW: The Pact by Karina Halle 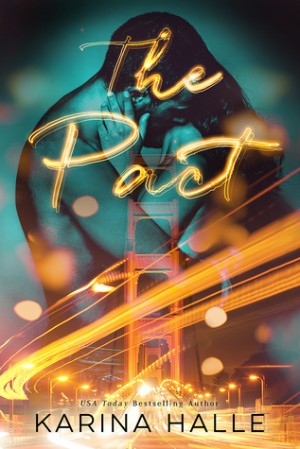 I’ve been hearing about your books for years, but had never tried one. I decided to pick up this one because the Friends to Lovers trope generally works pretty well for me. The Pact was no exception.

Linden McGregor and Stephanie Robson have been friends for years. They met when Stephanie came to work for James, Linden’s best friend, at his bar. Even though James and Stephanie had a quick fling that Stephanie ended, they all remained friends, and Linden acted as a buffer in those early days after the break up. The three of them are best friends. On Stephanie’s 25th birthday, she is bemoaning her inability to meet someone and Linden proposes a pact – that they will get married if they remain unmarried at 30. There has always been a simmering attraction between Linden and Stephanie, but neither have acted on it, mostly because of James. They’ve seen each other through family drama, financial struggle, and the growth and building of their professional lives. They genuinely like each other. And when their 30th birthdays roll around, and both are involved with people who aren’t “the One”, they begin to consider whether they should act upon the attraction and genuine affection they have for each other. But while James has not been involved with Stephanie in years, he’s always been possessive. Both know instinctively that he will be furious with them if they begin an affair. So, when they finally hook up, they decide to keep things secret. But as their feelings for each other deepen and they give each other their hearts, they must decide whether coming out as a couple will do irreparable damage to their friendship with James.

There are many things to really like about this book. The writing style is smooth and polished, with a very assured authorial voice. Both Linden and Stephanie are very likable, and I was able to connect with their attraction immediately and yearn for them to be together. The attraction and chemistry between the two is quite palpable and it made me root for them to finally act upon it. I thought you did a great job of demonstrating the risk that both felt they’d be taking to get involved and the genuine care and affection they had for each other. What was less easy for me to understand was the deep loyalty they felt for James. Most of the time, I felt like James was acting like a possessive jerk, and I just didn’t understand why either of them were so bound and determined not to hurt him, nor was I ever convinced that he would have genuinely been hurt if he found they were together, more like jealously pissed off. I felt like James mostly treated Stephanie like a bone that he and Linden were facing off over and I generally didn’t like him. Therefore, the reasoning behind the conflict between Linden and Stephanie was a stretch for me to invest in. I think the book would have benefited from building James’ personal relationship with each protagonist, so that I could fully invest in him as more than just a road block to their love story. But overall, I enjoyed my time with The Pact, and I thought that the resolution of the story was sweet and emotional. This book might have been the first I’ve read of yours, but I doubt very much it will be the last. The Pact gets a B from me.