REVIEW: The Other Daughter by Lauren Willig 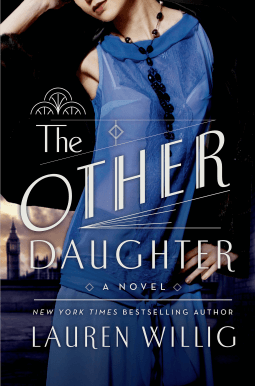 Raised by her widowed mother in genteel poverty in the 1920s in an isolated English village, for the past six years Rachel Woodley has been working in France as a nursery governess. When her mother unexpectedly dies, she returns to England to clear out the cottage, and finds a scrapbook full of cuttings from London society pages-all pictures of her supposedly deceased father, very much alive. He’s an earl, socially prominent, with another daughter who is living a charmed life: a debutante, much photographed, and engaged to a rising Tory MP. Rachel’s cousin confirms the horrible truth: her father is alive, with a legitimate, acknowledged family. Which makes Rachel…not legitimate. Everything she thought she knew about herself and her past-even her very name-is a lie.

Still reeling from the death of her mother, and furious at this betrayal, Rachel enters into an uneasy alliance with a mysterious man-about-town, who promises her access to her father. With his help, Rachel sets herself up in Roaring Twenties London under a new identity and insinuates herself into the party-going crowd of Bright Young Things, with a steely determination to unveil her father’s perfidy and bring his-and her half-sister’s-charmed world crashing down. Very soon, however, Rachel faces two unexpected snags: she finds she genuinely likes her half-sister, Olivia, whose situation isn’t as simple it appears; and that Rachel herself might just be falling for her sister’s fiancé.

I asked for this at Netgalley because I’ve enjoyed so many of your Pink Carnation books and the setting intrigued me. Thank goodness for Downton Abbey which, along with the 100 year anniversary of WWI is bringing this era back into style. At first the plot seems simple but as the story progressed, lots of shades, shadows and deeper currents emerged.

Rachel was raised by her widowed mother in the world of genteel poverty in which small touches of status mean so much. Rachel’s mother fought the good fight to still maintain her station in life and though Rachel’s remembered childhood had its penny pinching, her mother was always there for her. After her mother objects to Rachel taking a typing course to work in London, Rachel heads to France for seven years working as a governess to various families.

One of the first times that the era is evoked is in how telegrams conveyed importance and urgency and flu was still a dreaded word. I can’t imagine the shock of arriving too late, especially in this day and age of instant communication – whether one wants it or not. Then, it was all too tragic a possibility.

But more shocks await Rachel after she gets home. A forgotten newspaper clipping leads Rachel to query her only known relation, an Oxford don, who reluctantly reveals to her that her father, whom she had thought was dead since her childhood, is alive and well and an Earl. Rachel’s angry outburst is overheard by a mystery man who plies her with tea and walnut cake and then yields to Rachel’s determination to seek out her father and learn the truth.

Why is Simon so caustic and drawling? Does this cloak hidden depths? Are raw emotions buried for some reason? Or is he just hedonistic and ruined like the rest of the Bright Young Things are or pretend to be? He’s got a wicked, dry wit with a ready stinging retort for everything which Rachel admits steadies her nerves if nothing else. He also wears his clothes – especially the evening clothes – as if born to it, which he is. It’s all code, slang, private jokes, nicknames and attitude with this set. Just wearing the right frock isn’t nearly enough. Then the truth comes out and Rachel wonders what she’s got herself into. Now she’s up to her neck in whatever Simon has plotted. I did wonder, is the fabulous background Simon “made up” to give Vera color taken from his real life experiences?

Rachel discovers she has a natural talent for deception – something that would have horrified her only days ago. Then she meets her sister’s fiancé John, who appears to see this lot as the useless creatures they currently are rather than the intelligent leaders they should be – but still with an aristocratic view of the lower sorts.

The evocation of the period and people is good. Here is a generation of nobs lost in an alcoholic haze and the endless chase for something to relieve their supposed ennui. The frocks, the hats, the gloves and cigarette holders as works of art. Everyone, of course, constantly puffs away on gaspers. This is the time of seeing out the old ways and seeing in the changes coming to this world and these people. It’s the calm between the wars but the writing is on the wall for those who care to read it.

This is an artificial, brittle, bored world with no place for Rachel. One jolt after another hits her as she meets sister, aunt, cousins – and finally the one she started the whole charade to encounter. And she can claim none of them, is claimed by no one, is still all alone. It’s not until she enters Simon’s pied a terre that she sees a real, comfortable place, a place made to be lived in and enjoyed in its compact, worn perfection. Now that she knows she wants something in return for all the years she yearned for a dead father, she must decide what and discover what Simon wants.

Will Rachel get the closure she yearns for and needs? As she learns about her father’s other family, she catches on that not all is bright and wonderful on that side of the divide. Yeah, the money and social position are fabulous but there’s a price to be paid and she sees her sister paying it every day. Oh, what a ghastly mother the poor dear has. Meanwhile the relationship between Simon and Olivia gets more mysterious to Rachel.

Some heartbreaking revelations show Rachel that she’s in over her head – that these are deep and treacherous waters which can drown her trying to understand the ties that bind these people and the hurts that their wild gaiety hides. Rachel also begins to sharply examine her own actions and the consequences they bring to others. Her motives might have started her down the road of self righteousness but they’ve lead to a dead end where she finds herself as bad as any of the toffs – no, worse because at least they’re not lying. She’s prided herself on taking care of herself, of being self sufficient but what is she now but living off others for what she’s found are dubious ends.

Rachel is horrified to discover that her masquerade has probably been known all along by most of this crowd. Certainly by her father’s people though they don’t know she’s a cuckoo in the nest. But she’s going to see this through, come hell or high water and guilts Simon into assisting her. Since the story is told entirely from her POV, Simon’s true reasons for helping her have remained a mystery to the reader – and it turns out to Rachel as well. She grasped at what she thought was his motivation but as she gets to know him better, she sees he’s far more wounded and principled than she thought. He’s been as disillusioned as she becomes. He suffered in the war and his hopes have come crashing down to the point of bitterness and self loathing.

Even at her lowest moments, Rachel is a fighter, a scrapper. She gets hit with unbelievable news? She withers the teller with sarcasm. A handsome man offers to take her to tea and prop her emotionally battered self up? She tells him to hie off. Her hoped for dreams turn to dust? She keeps her head up and gets the last word in.

There are little hints along the way that Rachel and Simon fit together. They have a shared braveness about pulling off the ruse, are sympatico and think the same. He knows this insular world as only an insider can. But she loosens up his jaded and cynical self, a little, even as she discovers he’s not quite the urban, bored drawler. His initial reasons to take her up on her scheme had good ulterior reasons that didn’t benefit him.

Rachel gets what she set out for but not what she wants. Fairy tales aren’t true, reunions sometimes end in heartache and there are times it’s best to leave memories behind. Where does she go and where does she belong now? Ah, to Simon who now finally fills her in on his past and his demons. Finally Rachel understands all the darkness in this world of theirs. But as Simon makes “come with me to NYC” noises, I need to know why. Is this just shared misery and pity? Or more?

Well Simon can put on a pretty good show of saying he loves her but after the way Rachel’s world has been turned upside down, she’ll need a lot of convincing. He says she’s the strongest person he knows – because of his war issues? They match, in a way. He takes her as she is and doesn’t care about who she is or could have been. He knows her weaknesses and knows she knows his.

The finale of Rachel’s childhood is painful with her “Why?!” finally answered. In speaking of her childhood and mother, she ultimately gains the closure she sought as she sees her life as the happy, safe existence it was and learns just how little she need envy her sister.

Rachel mourns then puts her old life to rest. She’s grown emotionally over the past three months. She can look at what she had and realize it might have been better than what she could have had. That she’s grown up to be a better person than the idle time wasters smoking and drinking until dawn in the endless pursuit of novelty and oblivion. Her mother made sure Rachel had that. Rachel is much like her mother – strong as Simon called her, and unwilling to settle, determined to make her own way and be her own person.

Her ending conversation with Simon tells her much. She’s determined enough, strong enough to inspire him to try and be likewise. Men often say they want to be worthy of a woman, to be a better man, but he really does and then showed it. But then he changes her too, makes her willing to strike out and be bold and daring. These two know each other – best and worst. One thing is for sure – life with these two will never be dull. B