I always seem to be behind in keeping up with this series but I think it’s because I want to be sure I have a Pink Carnation book on hand. And in this instance it worked beautifully for me. You see, I’ve been in a reading slump for it seems like ages (actually about 3 months) and “The Orchid Affair” is what I needed to finally pull out of it. So thank you for doing me such a service. Now, on to our regularly scheduled review: 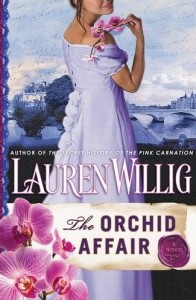 Miss Laura Gray has been a governess for sixteen years and is convinced that if she doesn’t do something different now, that this is all she will ever be. Her chance arrives when she is recruited by the Pink Carnation. After a short stint at the Selwick spy school, she leaves on her first assignment. Her job is to take a position in the household of Andre Jaouen who is the right hand man of Bonaparte’s minister of police. True she’s pretending to be a governess for his two young children, but if she does well perhaps her next assignment will be something a tad more exciting.

However, she has to survive this job first and things begin to get dicey after she’s recognized by an old friend of her deceased parents. Is Antoine Daubier merely a friend of her employer or is there something else going on here? Should Laura be worried that Gaston Delaroche, Andre’s sinister colleague, knows not only the names of Andre’s children but hers as well? And who is behind the Royalist plot to remove the First Consul and restore the monarchy? Laura wanted exciting but maybe merely interesting would have been a better wish.

I’ll start by saying that there are some details about the book and its setup that don’t make a great deal of sense and are perhaps best skimmed over. How was Laura discovered and recruited? Why was Andre willing to bring someone new into his household given what was going on? And though I know that the Treaty of Amiens was still in effect during the timeframe of this novel, how are two so obviously English people as Miss Wooliston and Mr. Whittlesby so accepted in the circle of the First Consul’s family? After pondering these questions a bit, I realized that to continue was to not only invite a headache but to also ruin the story for me.

Laura Gray – or Laure Griscogne since she decides to use her real French name while on the assignment – is a great heroine. She’s intelligent, she’s resourceful, she thinks quickly and acts decisively yet she’s not a typical “kick ass” woman. She has been trained – a little – in self defense and how to use weapons but she rarely relies on this. Instead, she acts like the best spies do and that’s to blend in and not attract attention. Sixteen years of blending and being “gray” for lack of a better word serve her well. She’s also not all angsty. Life hasn’t treated her spectacularly well – she lost her parents at age sixteen and has fended for and survived on her own since then – but she doesn’t weep and wail about it and, when the opportunity appears, she takes a chance to change things.

Andre is more complicated than he might initially appear. Laura’s first impression is of a cold, matter-of-fact man who doesn’t suffer fools gladly. As her time in the household passes, she sees a man who loves his children even if he might not think he knows how to show that. She also discovers that he isn’t at all what she or her superiors believe him to be. She – and I too – wonder how can this be? Here is a man who has been dedicated to the changes that have taken place in France over the past fourteen years. A man who worked to bring about those changes. So, why is he doing what he’s doing? The way you have him explain it to Laura makes sense. He is a man who wants a better future for his country and, especially, for his children. But he also wants a stable world for them. Since he isn’t a swashbuckling man-of-action, he works for this end in his own way.

I like their relationship. They aren’t flamboyant people and the way they fall in love is slowly and gently. When the misunderstanding arrives, it’s not really a Big Mis and it doesn’t derail their feelings. Instead of a “you betrayed me you beyotch!” scene, there is initial astonishment followed by thought and a reconciliation.

The tension and atmosphere of the novel is excellent. I can feel the cold, wet damp of Paris in the winter. Likewise, the ravaged Hotel de Bac echoes its past glory and sulks in its present gloom. The feeling of political change is in the air as the fervor of the Revolution has almost died down and the status quo is shifting. But there are still throwbacks to recent past methods of dealing with dissension. Andre might not enjoy putting suspects to The Question as much as does Delaroche but he still gets results for his superiors. He is, after all, a practical man who does what is needed to try and bring about the changes he wishes to see take place. It all makes sense given the way you’ve developed the plot and the characters.

The modern portion of the book doesn’t interest me or hold my attention as much as you’d probably like it to. This relationship and Eloise’s research is moving so slowly – glaciers move more quickly – that when it pops up, I feel more impatient to get back to the main action than any burning desire to know about what is going on with her and Colin.

A heroine who is strong in a “period” way, a beta hero who comes to love and admire her for who she is as well as being strong in his own non-flashy way, two children who I haven’t really discussed much but who don’t annoy me – and that’s saying a lot from me, the slow building to a bang up finish and a wrap up that doesn’t require a gooey sweet epilogue means I like this book a lot. Good job and I’m looking forward to the next installment which hopefully I’ll get to sooner than I did for this one. B