When someone on Twitter mentioned that your older book, The Mistress Deception, features a virgin widower, I bolted right over to Amazon to purchase a digital copy, excited at the idea of a Harlequin Presents playing against type in this way. That was not the only pleasant surprise of the book, and despite some cringeworthy behavior on the part of the hero, I enjoyed The Mistress Deception quite a bit. 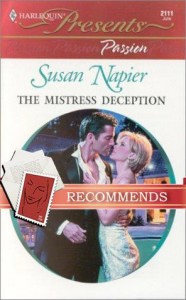 Matthew Riordan always gets extremely drunk on the anniversary of his wife’s death. When he shows up in a completely disreputable and obnoxious state to a formal dinner party where Rachel Blair is working security, the hostess begs Rachel to do something before he ruins the entire evening. Something turns out to be discreetly tripping him into the pool and then taking him to the guest house where he can change clothes and, hopefully, sleep it off.

Matthew has other plans, however, with Rachel’s lush body mere inches away as she helps him remove his sodden clothes. All evening he has been sexually crude and provocatively insulting to the voluptuous stranger, and now he demonstrates how close his disrespect is to his physical desire for her. After an extended physical struggle, Rachel has to subdue Matthew physically, eventually tying his hands to the headboard of the guest bed after he pulls the top of her dress down and begins fondling her breasts, begging her for more. Which partially explains Matthew’s incendiary reaction to the photos he receives in the mail several days later, which detail the more lascivious moments between him and Rachel, including a whip on the bed of which he has no recollection. The photos were actually sent to his father, for whom Matthew is filling in at his father’s waste-disposal conglomerate while his father recovers from a heart attack. While Matthew is thankful he intercepted the envelope before his father saw its contents, he is enraged at the thought that Rachel Blair would dare to try to humiliate and/or blackmail him!

When Rachel receives the package from KR Industries, she has fleeting thoughts of an early birthday present, until, that is, she sees the photographs and the note from Matthew Riordan that promises retribution:

Rachel is doubly baffled; not only is she as scandalized and confused by the photos – and their possible source – as Matthew, but she cannot imagine why the man would want to ruin a woman who had gone out of her way to be discrete about what had happened at the party and in the guest house. And how dare he call her “blowsy”! Rachel hadn’t even wanted to wear that figure-hugging dress, going out of her way under normal circumstances to downplay her curves and neutralize her physicality. Her own past taught her to do that, but beyond those secrets, Rachel has worked hard to be taken seriously, both as a fitness trainer and half owner of a security company. Despite the strange things that had been happening to her since she inherited the company and her home from her fiancé, following his unexpected death – bureaucratic mistakes and bogus anonymous complaints against her – Rachel was determined to keep Weston Security intact, if not for herself, then at least for her fiancé’s brother and business partner, Frank. And those party photos could endanger more than Weston’s present future contracts, one of which is a pending deal with KR Industries.

Fortunately, Rachel is not the hand-wringing type, and she sets out to surreptitiously follow Matthew to determine his intentions with the photos. An accident of timing and a coincidence involving Matthew’s mother brings the two together in the hospital where Matthew’s father is recovering and into combat that reveals their mutual mistrust and reluctant but no less mutual attraction:

“What do you think you’re doing?” she screeched as he kicked the door shut behind them. Her shoulder bumped against a shelf of folded sheets as she hastily tried to widen the distance between them in the narrowly confined space. The overhead light threw Matthew’s grim face into harsh relief as she protested shrilly, “This is a supply cupboard!”

“I stand in awe of your powers of deduction,” he sneered, leaning back against the door as he tore open the envelope in his hand.

“That was addressed to your father, not you!” she accused.

“And what is it you’re so keen for him to see? Ahh, what have we here? Another episode of the Lifestyles of the Sick and Shameless? He flashed her a familiar set of images and she sucked in an appalled breath.

“Oh, my God!” She raised her bewildered gaze to his.

“You bitch!” He exploded away from the door. “You had to keep turning the screws didn’t you? Even when you knew it wasn’t going to get you what you wanted!”

It’s not long before Rachel delivers the obligatory slap, which changes the tone of their exchange substantially:

“You looking to get physical with me?” he growled, leaning closer.

“How do I look? As if I want to eat you?” He nipped at the succulent flesh, keeping it captive between his teeth as she arched her neck away, then releasing it to press his open mouth into the sensitive hollow between the stem of her neck and her collarbone and drink in the taste and texture of her skin. “That’s because I do! God, how can someone so bad taste so damned good…?” he groaned.

Since she was fifteen Rachel’s worst nightmare had been to find herself pinned down by superior strength, trapped and helpless against a greedy male assault. But where was the revulsion, the fear and the fury to defend herself now? She was rendered helpless – not by the violence of Matthew’s sexual need, but the uncontrollable desires that raced recklessly through her own veins.

Had I not been familiar with the melodramatic structure and language of Harlequin Presents, I might have put the book down following this exchange. The cheesy double-entendres, the contrast between Rachel’s experience with sexual assault and Matthew’s, uh, sexual assault, make me wince when I read them back out of context and outside the heat of the moment I was reading the book for the first time. And then, when Matthew “kidnaps” Rachel and takes her to his compound, literally locking her in, I knew it would take very little to push the rest of the book around the bend to Krazy Town, no U-Turn allowed.

Instead, these two capricious caricatures morph into rational, interesting people, who are actually able to talk to each other about who may be setting them both up and why. And in a nice role reversal, it is Rachel, not Matthew, who is the “expert” when it comes to strategy:

“Let’s remember that I’m the professional in this field; you’re just a –“

And despite the previous lack of control their passionate attraction seemed to foreshadow, their physical relationship develops slowly, in large part because the more they talk to each other and share their pasts, the more obvious it becomes that sex is a very big deal to both of them, albeit for different reasons. Thus the investigatory partnership creates a bond of equality between them that builds trust and intimacy without the uncomfortable power dynamics HP’s sometimes utilize to generate relationship drama.

However, there is enough tension in Matthew and Rachel’s personal histories to infuse their budding relationship with emotional drama. The circumstances of Matthew’s marriage and his wife’s death are much more complex and tragic than is commonly known, while Rachel has her own secrets that make her protective of her independence and her work and family. Those secrets make a moment of wavering faith Rachel has in Matthew somewhat understandable, although what truly saves the moment from being a mere Mandatory Plot Obstacle To True Love is Rachel’s quick recovery of her usual reasonable, evidence-based thought-process.

The Mistress Deception is an interesting book. There are elements and sections of the story that cohere to some of the stereotypes associated with the Presents line, while other aspects of the book subvert those stereotypes thoughtfully and compellingly. Throughout I was compelled to keep reading, even when I was wincing, and I even enjoyed much of the melodrama, especially when it revealed layers of significance for the characters (the scene where Rachel ties Matthew to the bed, for example, is a provocatively written exchange, changing in significance once the truth of Matthew’s past is finally revealed).  Rachel had moments of pseudo-martyrdom, but her practicality and independent intelligence compensated greatly, and the general respect she and Matthew develop for one another created a lot of good will for me in terms of trusting in the wisdom of their union. The mystery of the photos was not a big surprise to me, but it fit with the characters and the storyline, and it served a rational purpose in catalyzing the romantic relationship. By the end, The Mistress Deception resolved into a B read for me.