I found out about this book over at the Amazon forums.  It’s one of the better places to discover self published books by authors that aren’t widely known.   Part of the success of the book will rely on the reader’s ability to a) buy into an instant love between two childhood friends and b) tolerate cheating by the heroine on her existing boyfriend with the hero. 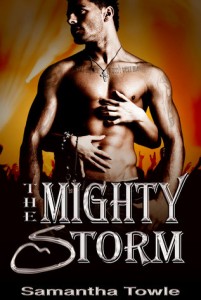 Trudy Bennett and Jake Whethers were best friends from tots to teenagers.  Jake’s father was a brute of a man and his mother weak and Jake spent a lot of time at the Bennett household where both kids learned to love music at the guidance of Trudy’s father, a musician himself.  At the age of 14, Jake was moved to New York. Tru wrote to him and called him but over time gave up when she had no response.  Fast forward several years and Jake Whethers is now an international rockstar and Tru is a music journalist for a small magazine who scores one of the first post rehab interviews with Jake on his come back tour.

Jake’s band member and best friend, Johnny, killed himself driving high and drunk. The death drove the already unstable Jake around the bend, culminating in Jake urinating on stage during a Japanese concert.  It was Jake’s wake up call and he’s now determined to tour with his band to honor Johnny’s memory.

Even though the story is told in the first person, the reader knows instantly that Jake is not only excited to have Tru back in his life, but he’ll do just about anything to keep her there.  He doesn’t care that she has a long time boyfriend.  He doesn’t care that he is going on tour.  Instead, he decides he is going to have a biography of his life done and Tru is going to write it.  Some faint nods towards the ethically questionable nature of this are given but neither Tru nor her editor really belabor it.  Jake certainly doesn’t care.

The first part of the book is Tru trying to resist Jake’s advances.  She knows she wants him but she also cares for her boyfriend and she’s not willing to throw away two years of a good relationship to be a fling of Jake’s.

Tru’s dilemma provided most of the emotional agnst for the first 40% of the book and when she does fall into Jake’s bed, it seems only inevitable.  Fortunately, I felt that she handled the situation as best as possible without unnaturally dragging out the infidelity which I was worried would happen.  The second half of the conflict involved Tru being concerned about whether she wanted to actually live Jake’s life which was privacy free and involved the constant presence of bodyguards and cameras.

His hand moves from my breast, down my body. Lifting up, he kneels between my legs, and it’s at that point I see he’s lost his towel.

Holy fuck, he is huge. And I mean huge.

I gulp down, worrying how the hell he’s going to actually fit inside me.

Jake sees my staring and grins.

He makes a low guttural sound in his throat, then pulls his finger out of me so quickly that I gasp.

Then he’s ripping my panties off. And when I say ripping, I mean he actually tears them off, shredding them. No one has ever done that to me before, and it’s insanely hot.

Leaving me wanting, he reaches down to the floor, picking his jeans up. I hear rustling and, then he’s returning with a condom in his hand and a question in his eyes.

He’s asking for my permission. He wants me to say yes.

I want to say yes. More than I’ve ever wanted anything before.

With trembling fingers, I take the condom from his hand and tear the foil open with my teeth.

His eyes are wide and flaming. His breath’s heavy.

He kneels before me.

I reach over, and with shaky fingers, put the condom on him. I can feel his body trembling under my hands.[/spoiler]

The book sped along too quickly at the end, resolving some serious problems. I was glad to hear that there is a sequel planned because I wasn’t convinced either person was ready for the HEA.  They have too many issues to work through yet and I want to read more about their high octane, very sexy relationship.  It’s a self published book and the production quality is quite high.

→ Jane
Previous article: Wednesday News: One of the truest, most inspiring love stories you may ever read
Next Post: The DA3 Interview & Giveaway: Foster Care