REVIEW: The Many Sins of Lord Cameron by Jennifer Ashley

In The Madness of Lord Ian MacKenzie, Mac says to Ian:

Mac sighed, cutting through the memory. “We’re Mackenzies. We don’t get happy endings.” Ian wiped his eyes with the back of his hand and didn’t answer. 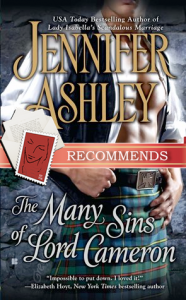 Their father lived by the mantra that sparing the rod spoiled the child. He beat his youngest son, Ian, because Ian couldn’t look him in the face.  He beat Mac because Mac was unnaturally attracted to art.  He beat Hart, the eldest, because he felt the heir should be beat.  He left Cameron only, mostly because of Cameron’s interest in horses and women seemed to parallel the Duke’s interest the closest.  At about the age of nineteen, Cameron married a high strung society beauty Elizabeth.  Elizabeth had never been stable and Cameron’s attempts to reign her in, made her strike out at Cameron in cruel ways.  There seemed to be few parts of Cameron’s body that did not bear the physical scars of her madness and all his encounters with women after her death reinforced his emotional scars–that women were capricious and faithless, at best; cruel and dangerous, at worst.

When Cameron first meets Ainsley Douglas, he places her in the first category—capricious and faithless.  Ainsley was found lurking about his chambers.  She wouldn’t be the first married woman to want to get tupped by Cameron and he was happy to oblige only at the last minute, Ainsley found her wits and refused Cameron, stating that her elderly husband was a good man and did not deserve to be cuckolded.   When Cameron finds her in his chambers six years later, he’s not so sanguine.  Ainsley has been on the fringes of his life for six years.  The Ainsley/Cameron connection is one of the weakest parts of the book.  Cameron really shouldn’t fall in love with Ainsley because she’s sneaky.  She’s lied to him before.  She’s always in his chambers trying to take something from him.

If Cameron really believes that women are cruel, capricious and faithless (and I believe that the text shows that he does) then why he falls for Ainsley is befuddling.  Yet, he does and quickly.  Ainsley is one of the queen’s ladies in waiting and she is attempting to retrieve something that belongs to the queen from a former lady in waiting.  Cameron assists Ainsley in this task and invites her to have an affair with him.  His feelings toward her, however, are stronger than simply wanting to have her in his bed.  Perhaps it all dates back to Ainsley’s first rejection of Cameron, based on her devotion to her aged husband.

Ainsley considers the offer, even consults with Eleanor the woman who jilted Hart MacKenzie.  Should she give up her reputation and her place with the virtuous Queen Victoria to have an affair with Cameron MacKenzie?  It’s not a small decision because Ainsley has spent a long time carving out a life for herself.  Her family loves her but she didn’t want to live in their pockets, the spinster aunt, for her entire life.  She knows that Queen Victoria would never approve and she does not have the status nor resources to recover from a liaison with Cameron MacKenzie.

Cameron’s love for his horses is much more understandable.  Part of the story is about how Cameron is asked to train a particularly beautiful but mistreated mare by her wastrel owner.  Cameron wants to buy the horse, but the owner refuses.   Cameron’s relationship with Ainsley is often frenetic, as if it will end at any moment, and thus they both try to shove in as much living as possible in each day.  It makes their union tinged with a sense of foreboding.

Ainsley is the right foil for Cameron. She’s very grounded, perhaps because of her past mistakes.  She’s patient.  I liked that she came from a loving family and while not well off, she wasn’t so destitute that she had to do anything.  When she went to Cameron, she did so because she wanted to, not because circumstances forced her to do so.  I also thought that the pairing of Ainsley and Cameron felt right. Even though I felt that how they fell in love was glossed over, I did believe that these two people fit together perfectly and that only Ainsley could have saved Cameron from himself, brought him back from the precipice.  In the end it didn’t really matter that I never saw what brought the two of them together.  The end justified the path it took to get there.

Cameron is not very heroic. He sleeps around with seemingly no real standards, he’s an indifferent father at best, and he cares mostly about his horses.  Ainsley is the hero in this story.  She’s there to save yet another MacKenzie from utter emotional ruin.  I can’t resist the strong, pragmatic Ainsley and the wounded Cameron.  B

PS Someone on twitter said that Lord Ian steals whatever scene he is in and I have to agree. He’s my favorite MacKenzie brother yet.