REVIEW: The Man Who Could Never Love by Kate Hewitt

Note: was released in the UK as “The Bride’s Awakening”

Your post at DA about your hero who deliberately marries his plain heroine caught my attention. A dashing, powerful, dark Italian hero who isn’t going to bed/marry then spurn/reject/humiliate a delicate blonde flower of a heroine? Bring it!

“Vittorio Ralfino, the Count of Cazlevara, is back in Italy to make a business proposition. He wishes to marry a traditional wife, and Anamaria Viale—sturdy, plain and from a good vintner’s family—perfectly fits his bill.

Ana is stunned that Vittorio is offering her—an ugly duckling!—marriage. She’d stoically resigned herself to a career and singledom.

But Vittorio is persuasive and Ana would like a child of her own. Although she’s under no illusion that this is anything but a convenient marriage—Vittorio will never offer her love. So when the time comes for him to claim her as his bride, she’s surprised—and amazed—at the strength of his passion….” 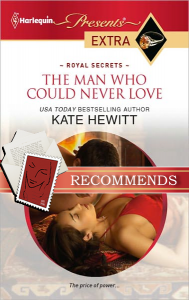 One thing that really gets my shorts in a wad is a huge power disparity between hero and heroine. I don’t just mean money or status or titles but also personal power. So I was delighted that Ana, despite often not being able to resist her desire for Vittorio, initially stands up to him and sets him back on his heels. He thinks it’s going to be a quick 1, 2 done deal to get Ana to agree to what he’s already decided will happen. Instead she is the one who walks away from him at their first meeting and clearly disdains his obvious, practiced and insincere flattery. A stunned Vittoria realizes he’s going to have to regroup and try again. And yet again when she rejects his offer to doll herself up with new clothes at an exclusive Venetian boutique. Ana makes Vittorio work for it even though she enjoys the thoughfully chosen gifts he sends her and really enjoys kissing him.

Ana is one who has never thought of herself as beautiful nor has anyone else. Cutting comments which started back when she was a teenager and an aborted attempt at romance in college have her convinced that a grand romance and hot passion are not in her future regardless of whether or not she’s always admired and had fond thoughts of Vittorio. She has a real dilemma. Should she marry someone who claims he doesn’t and will never love her. Can she put away her feelings for him and accept a clinical business marriage? If she says no, will this be her only chance, as she nears age thirty, for any chance at marriage and for the children she’d like to have? Ana stops and thinks about all this, considers her options, talks with her father and then makes an informed decision that isn’t merely based on the fact that she melts like a chocolate bar in the tropical sun when Vittorio kisses her. She also coolly informs him not to try and change her – he knows what he’s getting and he better be content with that. When Ana dissolves into a puddle for the tenth time, I reminded myself of those positive things and of the fact that she stays relatively level headed about all this.

Vittorio might be cold and controlled but it’s soon obvious why he’s adopted this attitude. Hurt by both parents while still a child then continuously snubbed and slighted by his cold mother and spoilt younger brother, this is his armor against it all. He might not dwell on these issues all the time but learned behavior is just that and has become second nature to him. It takes Ana a little while to figure it all out – aided by comments from the Dowager Contessa and a heart to heart with Bernardo – but she does and realizes that this shell that Vittorio wears needs to be dealt with they are to have any chance of continuing the happiness they’ve worked towards.

Ana’s actions that Vittorio objects to and thinks of as disloyal are based on positive, thought out goals instead of being rash. She knows he’ll be angry but is counting on his good sense and intelligence to allow her to explain. When the eruption occurs, she still fights for them until she thinks it’s all hopeless. But since Vittorio is the one in the wrong, I’m glad he’s the one who appears to suffer more – at least he was the one crying all night – and that he’s the one who – quickly, yeah! – comes to his senses and effects a reconciliation. Okay the discussions he says have already taken place seem rather quick but it’s still an work in progress when the book ends. Cracks in family relations take a lot longer than a few hours worth of early morning talks to finally clear away.

Alright all you Presents fans and authors. You kept telling me that they’re not all alike and now I believe you. My luck with this line has been spotty at best but I’ll keep a more open mind in the future. A more equally power balanced couple, a heroine who is not a dainty, fainting doormat and a hero who quickly realizes when he’s wrong and then works to fix things are worth a B grade for this one.