REVIEW: The Man She Loves to Hate by Kelly Hunter

A few weeks ago, I again dipped my toe into the Harlequin Presents pool. Now you have to understand that generally I have avoided this particular pool in favor of other Harlequin lines because the asshole:doormat ratio (as Jane likes to term it) usually drives me bonkers. But! I was assured that this isn’t always the case. So I tried Kate Hewitt’s book and in the comments your name came up. I noticed that you have this new book coming out and at the urging of a friend of mine, I slotted this you as my next HP author to read. Good job, everyone!

“Three reasons to keep away from Cole Rees…

1. My mom had a scorching affair with his dad—just think how awkward that “meet the family” would be…

2. His arrogance drives me mad—he might be a gorgeous billionaire, but I hate how he knows it!

3. Every time he touches me I go up in flames…and it’s utterly terrifying.

Come on, a fling with the man I love to hate? Like that would ever work out…” 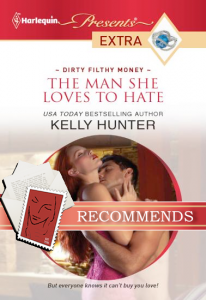 Well, well that’s some blurb. And this is some book but it’s got depths that the blurb doesn’t truly touch on. James Rees didn’t just have an affair with Rachel Tanner – they had a twelve year liaison that almost tore the Rees family apart, destroyed the childhood friendship of Cole’s sister Hannah and Jolie Tanner and is still causing repercussions even after James’ death. If there are two people who want nothing to do with each other it’s Cole and Jolie. But they meet up after Jolie went to clear her mother’s belongings out of the cabin James had kept at the ski resort the Rees family owns. And it just so happened that this is where Cole goes after the funeral to clear his head. Too bad a vicious snow storm trapped them in the same gondala going down the mountain.

The two keep their heads – at first – since Jolie has enough outerwear to disguise her. She rebuffs Cole’s efforts at conversation and at one point even tries to distract him by suggesting he consider men. Now there’s a woman I can admire. When Cole realizes who Jolie is though, she rips into him for all the misunderstandings he’s harbored over the years and sets the record straight about what she and her mother did and did not get from his father. They did not get material things. They did get scorn, leers and, for Jolie, an inability to trust with a hard shell wrapped around it.

Cole has trouble believing all this. Until he thinks about it and then he’s got the internal grace to admit that Jolie is right. He and the family have blamed her for the relationship between the Rachel and James. When the two are rescued and released from hospital to face a ravenous press, Cole graciously admits Jolie saved his life and calmly denies anything lurid between them. For Jolie this is a revelation. A Rees who believes her and who appears to be determined to get to know her better. At first she dodges the issue then later, when an overworked Cole has bluntly confessed that the reason he wants her is to see if the incendiary, soul wrenching sex they actually did have while trapped was a one off. Okay so here are two points I don’t like – the “this is my soulmate sex” and the idea of “let me screw you once to forget you.”

Luckily for the story the once – done deliciously and then a few times more – turns out not to be enough. And it’s Cole who runs from experience the next morning. Cole turns out not to be able to stay away from her though. Partly is that he likes who he’s finally getting to really know and he’s also hurt and feeling small at how little Jolie initially trusted him. Over a period of weeks they get together, slowly advancing their relationship and while the romantic timeframe of the book is relatively short, I appreciated this time allowance. And when Cole screws up, and he does initially, he admits it and learns from it and makes it right.

What I really like about Cole is that he might be stinking rich and in charge of some ginormous business empire but that he isn’t arrogant about that. He’s focused, he’s driven, he’s successful but he’s not an arrogant prick. He also sees and acknowledges the integral role that her art plays in her life and her personality. It’s not just a job to her, it’s how she thinks and works out issues. Cole has spent his life trying not to be his father and he proves it to Jolie when it counts.

Jolie impresses me with the mechanisms she constructed during her childhood to protect herself and then how she had the faith and strength to let them drop for Cole. She also verbally wallops Cole about how the Rees family treated her and refuses to take any more of it. Come to think of it, she verbally takes a strip off a dirty old member of Cole’s board of directors too. When she does briefly turn martyr-ish at the end, it’s not just because Cole’s family is giving him hell and she’s going to bravely go like Violetta in La Traviata. She does it a lot because she’s tired of the grief from this family and she doesn’t want to deal with it anymore.

The final thing I like about Cole is that in the face of her rejection, he’s got enough belief in their love to go after her anyway and to show with his gifts and his speech that he really had listened to what she said she wants in life. And he does a damn fine marriage proposal.

He pulled a black velvet ring box from his overcoat pocket and held it out towards her. ‘Champagne and roses and a loving partner for Jolie Tanner. Someone who’s proud of her and supportive of her, and who knows that she’s shy and connects deeply with her art and doesn’t always deal perfectly with reality, but then who does? Someone who loves her for exactly who she is and doesn’t give a damn what other people think of say. I hope I got it right.’

‘You did,’ she whispered, and her vision blurred.

Inquiring minds want to know it the “Dirty, Filthy Money” label on the cover means this a new series. Hmmm, I’m going to place my bets that either Hannah or Susan, who does sound like a woman not to fool around with will be seen in another book at some in the future. I’m not gulping the Kool-Aid yet but I will sip more of yours. B