REVIEW: The Luckiest Lady in London by Sherry Thomas

I was intrigued to learn that this Victorian Era romance is a prequel to Private Arrangements, one of my very favorite books, and hoped that the story might coincide with a past incident mentioned in that. My wish was granted! 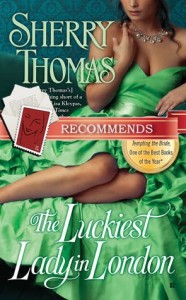 Louisa Cantwell, the ordinary looking, penniless daughter of a failed fortune-hunter and Lord Wrenworth, an excessively wealthy and handsome lord, have a surprising amount in common. Both have a scientific bent, both are shrewed planners, and both are carefully presenting a charming facade to society. Louisa is doing everything in her power to appear likable and attractive, in hopes of making a decent match; Felix’s motives are a more complex reaction to his loveless upbringing. (Today, I think he might be diagnosed with an attachment disorder.) They’re twin souls, and they know it:

You, sir, are a scoundrel.

As if he’d heard her thought, he glanced her way. Their gazes held, a pair of miscreants recognizing each other in a roomful of upstanding people.

It lasted only a moment, but the sweetness of that secret communion lingered: a joy that was also an ache in her heart. They were two of a kind–she wished she wouldn’t need to always guard herself from him.

There are two other important qualities they share. They’re ferociously attracted to each other — and when that attraction eventually leads to marriage, they’re each determined to have a good time, while carefully guarding their hearts.

She set her fingers on the handle of the walking stick, still warm with the heat of his hand.

“Very fine specimen you have here,” she said, a little shocked at both her words and her action.

She was caressing the part of him that he had chosen to extend to her person, her fingertips exploring every nook and cranny of the handle. His gaze, intense and heavy-lidded, traveled from her face to her uninhibited hand and back again.

Since there’s no legitimate plot reason for them to not just go ahead and get married, I was pleased when they did. The story then becomes about their fear of having real feelings for each other, especially for the deeply messed-up Felix.

As in other Thomas books such as Private Arrangements and Not Quite a Husband, sex is used here as kind of a barometer of an unhealthy relationship. It’s fierce, and sometimes ugly, and provides a very effective weapon for a Victorian man to use against a well-schooled Victorian woman. But despite hurt and humiliation, Louisa is a match for Felix even in this arena.

(This is the section of the book that overlaps with part of Private Arrangements. I found it a little disappointing, because what happened sounds so excruciating when Gigi mentions it and we don’t actually see much of her feelings here. But on reflection, it makes sense to keep Gigi’s angst out of this story and focus on Louisa and Felix — and the event does provide a great trigger for drama in their relationship.)

Felix and Louisa aren’t always the most likable people, though Louisa is fairly sympathetic; she’s not ruthless or avaricious, just trying to provide for herself and her family, and to protect herself from the man she quite intelligently distrusts. The emotional journey is largely Felix’s, as he discovers the limits of his charm and learns what it means to actually care for another person.

I very much enjoyed the clever structure of this story, and its effective heart-wrenching. One aspect that disappointed me was the primarily off-stage character of Louisa’s sister Matilda, one of her primary motivations for marrying well. At one point, Louisa thinks, “It would never have occurred to her to disparage another debutante for her own competitive advantage, not even with an epileptic sister as an excuse.” That sums it up pretty well — Louisa’s sister does come across as more an excuse than an actual person, and Louisa thinks of her in a condescending, pitying way that’s grating.

Although I wasn’t as powerfully swept away by this as by some of its predecessors, I can’t be unhappy with elegant writing, a good battle of wits with well-armed opponents, and a juicy jolt of vicarious suffering. B

→ Willaful
Previous article: Tuesday News: King Tut’s death solved?; When the sex is too good; New models for digital book revenue
Next Post: Reading What You Know (aka The Great Pet Peeve)