REVIEW: The Loveliest Chocolate Shop in Paris by Jenny Colgan 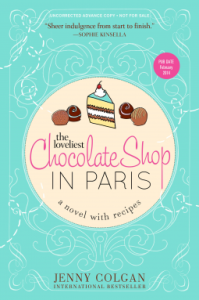 As dawn breaks over the Pont Neuf, and the cobbled alleyways of Paris come to life, Anna Trent is already awake and at work, mixing and stirring the finest, smoothest, richest chocolate; made entirely by hand, it is sold to the grande dames of Paris.

It’s a huge shift from the chocolate factory she worked in at home in the north of England. But when an accident changed everything, Anna was thrown back in touch with her French teacher, Claire, who offered her the chance of a lifetime — to work in Paris with Claire’s former sweetheart, Thierry, a master chocolatier.

With old wounds about to be uncovered and healed, Anna is set to discover more about real chocolate — and herself — than she ever dreamed.

When I started this book, I wasn’t at all sure I was going to continue with it. The opening scene is rather confusing – something about a terrible accident where Anna Trent works then her drug hazed, dream state in hospital before she finally learns what happened to her. It’s an injury which isn’t immediately obvious but one which throws Anna off balance, literally and figuratively. Then Anna’s former French teacher in school is introduced to the story. Suffering from (terminal) cancer, Claire sees in coaching Anna’s French language skills a way for them both to pass the time while being treated. I sat, thinking, where’s Paris? Where’s the chocolate? Where’s the romance? I had to wait a bit but soon things began to unfold.

This isn’t exactly a chick lit book and it’s not a straight romance either but rather a blending of the two. It’s told mainly from Anna’s first person point of view with briefer bits as told by Claire both in the present and in third person from her past in Paris as a young woman. In Anna we get a sorta chick lit heroine who has been in a low end job, doesn’t have a great love life, has some body issues but who then gets a chance to start over – in another fetch and carry job.

No Anna’s not immediately put to work in Paris creating mouth watering confections. It’s pot scrubbing and cleaning as she gets her language feet under her and begins to see the difference between the industrial, mass market chocolate churned out by the gross she’s been used to making and the hand crafted, ethereal, made by a master artisan, to be sold that only that day creations of Thierry Girard.

Between Thierry’s lunch excursions to out of the way restaurants and her flamboyant roommate Sami’s nighttime forays to Parisian hotspots, Anna begins to learn the city in a way the tourists never will. She also meets Laurent, Thierry’s estranged son, gets to know her two coworkers and dodges Alice, Thierry’s witchy English wife.

But in Claire’s story, the book departs from fluffy mode and gets layered with a touch of women’s fiction. Claire was also a young Englishwoman who ventured to Paris and found love. She then lost it and has spent a married lifetime wondering what went wrong. She sees in Anna a way to gently probe for answers before her time runs out. When I started reading the sections about Claire, I was bracing for depression yet this is handled so delicately that I was glued to the page to discover What Happened Next.

Yes, it’s bittersweet and an exercise in What Might Have Been but by the end of the book, Claire sees what becomes obvious to the reader – perhaps her life did unfold the way it was meant to. Maybe she had a better marriage than she would have had others not interfered. Just possibly making a life with someone who commands center stage and needs all eyes on him 24/7 is an exhausting business. I like the way this all revealed without Claire or Thierry becoming the fall guy or being turned into a nasty piece of work. And one character even gets some redemption by the end.

The romance of the book is divided between the two sets of lovers. In the first half, there is the beginning of Claire and Thierry’s instant attraction which burgeons into their lifelong, though thwarted, love. It’s not until the second half of the book that Laurent and Anna begin to get past their prickly introduction and the issues which initially divide them. I would have wished for more time to be spent on them but, as with fine chocolate, less is more. Plus they do see each other at less than their best and under trying circumstances so all their flaws are laid bare, understood and accepted.

I would be remiss without mentioning the other love affair here – that with the city of Paris itself. The descriptions of Paris are lush and loving but also honest about her shortcomings. Paris won’t always work well for everyone and the key seems to be in the way that you approach your time there. Anna and Claire are both willing to slip into the joy and magic of the City of Light and in doing so, the reader is just as seduced as they are. By the time I finished, I was in total agreement with the view of the French expressed by Anna’s coworker who questions “why accept a bunch of mediocre when you can have a bit of divine?”

“The Loveliest Chocolate Shop in Paris” is a tale of two Englishwomen in Paris, of love lost and found, of reaching for the best instead of settling for what you can get, of acceptance and making peace with the past. If the threads of the story are a bit neatly tied up at the end, the tying is gently and lovingly done. B