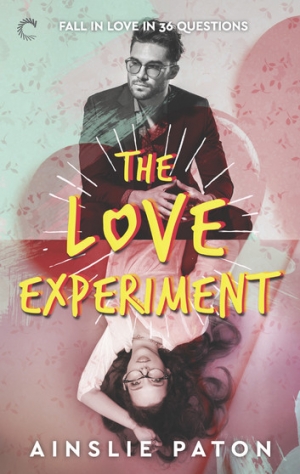 Disclaimer: I’m friendly with the author online, we talk often on Twitter, and I’ve met her a few times. She’s the kind of author who wouldn’t stop speaking to me if I didn’t like her books and I’m comfortable giving my honest opinion (else I wouldn’t review her work) but, it’s something DA readers might throw into the mix when considering the review below.

The Love Experiment puts the “36 Questions that lead to love” to the test with a grumpy, somewhat jaded investigative reporter hero and a younger, newbie online-journalist (think Buzzfeed lists) heroine. While I wasn’t convinced the questions would lead to love for just anyone, I did believe in this HEA – even though it was pretty fast.

Derelie (rhymes with “merrily”) Honeywell is a relatively new hire at the Chicago Courier. She’s working in the online section of the business, putting together lists of 25 top tweets and other pop culture pieces. Jackson Haley is an old-school investigative reporter on the print side of the Courier. He’s chasing a story about a fraudulent insurance company ripping of hundreds of vulnerable people. They work for the same paper but their jobs are very different. Jack is a bit of a dinosaur. He can use technology but he’s a bit scathing of new media and clickbait journalism. He also knows that his style of reporting is going out of fashion.

The book opens when Derelie finds out about impending cutbacks to the paper as profit margins become slimmer and people stop buying papers. She wants to keep her job (of course) and when she’s assigned to to the “love experiment” with Jack Haley she’s determined to do it and do it well. The only thing is, Jack isn’t interested. He’s busy with his insurance scam story and he thinks the love experiment is a stupid waste of time. He has a lot of pull at the paper, having been their poster-boy and media darling for years but the editor-in-chief sticks to his guns and insists Jack do the story with Derelie.

“You’re my star reporter, a living legend. Our readers will want to watch a hard-bitten champion of the fourth estate find true love in a questionnaire with a woman who thought he was gay. Who wouldn’t? It’s genius.”

Derelie has been in Chicago for some time but it still doesn’t feel home to her. She misses her dog back in Orderly, Illinois (“home of the white squirrel” and population 10,000) and hasn’t settled into city life. But she’s determined to live a “bigger life” and to embrace what the city has to offer. And she knows if she wants to progress her career, she needs to be in the city. And of course, she has to keep her job. So, she tries her best to pin down Jack Haley for the social experiment involving 36 questions and four minutes of staring at one another – to test whether it really does lead to love.

There were hints of “A Star is Born” (but without the tragic ending, thankfully) in the concept of the story. Derelie and her style of reporting is on the rise. Jack’s star may have peaked – especially if he can’t bring his insurance scam story in by deadline and ensure, as best he can, it is bulletproof (and litigation-proof). Jack isn’t interested in the 36 questions and when he’s basically forced by his editor into answering them, he isn’t very forthcoming. But he sees Derelie’s pluck and persistence. He admires her sticking to her guns and advocating for herself and her efforts to get the story, even if the story is him. And he finds himself regretting some shitty behaviour towards her which was designed to put her off but which just made him feel like a dick and didn’t change the fact he has to do the story. And Derelie’s still there.

Thus begins Jack falling under Derelie’s spell. He’s definitely attracted to her but it’s clearly about much more than just the physical which I appreciated. Lucky for him, the spellcasting is mutual and they very quickly fall into love and, basically, living together. The speed at which this move took place gave me hives actually – I get why it’s necessary to keep the plot moving but it makes me nervous when people go from sleeping together once to living together (basically) with barely a breath in between.

“You came through that door tonight and you looked at me as if you’d never seen me before. We don’t know each other. I’ve behaved like a bastard and this experiment started something, but I want to be sure that when I take you to bed it’s not the experiment I’m fucking. I want you to know it too.”

I was especially nervous because I knew I was reaching the point in a romance where the black moment happens and the feeling of impending doom did my head in a little. Still, the black moment, when it came wasn’t what I was expecting. Though, looking back, the set up was all there and I perhaps ought to have seen it coming.

Thankfully, the separation wasn’t for long and the solution, while somewhat serendipitous, meant a happy ending without compromises (wouldn’t it be lovely if we could all have them?).

I found the back half of the book much more compelling than the beginning. That’s not to say it was boring or bad. It’s just that I’ve been struggling to read lately and as I said on Twitter recently, even good books are “put downable”. However by the second half of the book my reading malaise wasn’t having it’s usual effect and I hit my stride.

Jack and Derelie are smart (well, apart from that whole jumping in to a full-on relationship with both feet and no safety net after one date thing – like I said, hives) and funny and their banter sizzles. I liked the language of news media (I learned a new word – dinkus) and the way you threaded it throughout the story. It showed you’d done your research but it was all there for a reason and not to show off. There was a sense of place to the book too, with the bustle of Chicago and grit of Jack’s “fight club”.

Plus, Jack has a cat who’s mission in life is to escape the apartment and have adventures. A cat who isn’t used to witnessing Jack have sex.

There was only unsteady loud breathing after that, sweat soaking into cotton and limbs glued comfortably together, and a cat with a wide-eyed WTF expression, staring in at them from the next room.

Jack has a bit of grovelling to do at various points throughout the book but to his credit he does give good grovel. And when he’s in, he’s all in.

“Five things are not enough.” His voice was pitched so low it curled inside her. “Five things puts a limit on you. You’re not five positive things. You’re five hundred, five thousand.”