REVIEW: The Last Summer of Being Single by Nina Harrington

Sydney entrepreneur Sebastien Castellano is used to women falling at his feet-‘not vice versa! But flat on his back, after an encounter with some overexcited hounds, he meets quirky housekeeper Ella Martinez.

Ella’s been dusting photos of Seb for years, and is skeptical about why he’s suddenly arrived at his childhood home in France. But her little boy thinks Seb’s cooler than his favorite superhero!

Well, if superheroes have pinstripe suits and laptops Ella sees the similarity. But beneath his buttoned-up exterior, Seb has the power to sweep Ella off her feet and show her a summer she’ll never forget!

It was the blurb that got me to try this book. Sometimes Harlequin book blurbs can be horrible, sometimes bland, sometimes totally off base but in this case the image of a suave Frenchman upended on his ass who nevertheless ends up sweeping the heroine off her feet got me. 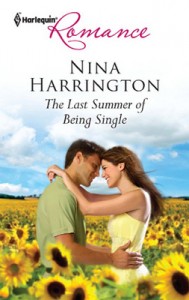 With apologies to its fans, I’ve discovered that the Harlequin Presents line, with their super powerful, almost misogynistic heroes, doesn’t appeal to me. I like a more balanced set of hero and heroine regardless of the amounts of money or prestige they might have – or not have. Here Sebastien has made his money, buckets of it, by his own efforts yet he’s so down to earth and approachable. His first meeting with Ella made me fall for him – no pun intended. Here’s a major international business player who could have gotten all snotty about being found on the ground under two enthusiastic griffons with his custom made suit rumpled but no, he takes the mature, fun way and laughs it off.

Sebastien isn’t presented as a French playboy, out for sex from anyone. He’s a driven businessman but he knows how to treat a lady well and is sensitive to Ella’s needs. The first time Ella has a chance to study Sebastien, she’s not taken with how hot he is – though she does notice what she’s already seen from his pictures at his stepmother’s house – she envies him his “on the road lifestyle,” seeing new places and things – and in the end this is something he’ll be able to offer her.

Ella isn’t a powerful, corporate type but she’s secure in what she does. Without a background of abundant salable skills, she’s managed to provide a home for her son. I love that Ella won’t let Sebastien walk over her even in a conversation. She demands respect and gets it. His apology is a hoot – “I am pond scum. Please accept my sincere apology.” Her lips twitched slightly, but he had already guess that she was not going to let him off the hook that easily. “What kind of pond scum?” “Green slime.” “Um. Okay.”

Though it’s placed in the south of France, the setting isn’t quite the usual Cote d’Azur but rather the Camargue. I can sense the warmth of the sunshine on the patio tiles, smell the heady fragrance of the many flowers in the garden, hear the buzzing of the bees, taste the salt from the marshes and would I ever love to taste the sweet cherries bursting out of Ella’s homemade tarts. And I totally agree that navy blue is just not the correct color for the shutters of the farmhouse. I hope that’s one of the first things Sebastien and Ella change.

The characters’ pasts are tied in with the present and they learn from things. Ella has to come to grips with the fact that her in-laws are just trying to do the best for Dan and hold onto what is left of his father in him. But she also has to face the insular environment she’s created at the farmhouse as a way to hold off the world. Sebastien is right that she needs to open up, let loose and live again – to reach for her singing dreams instead of shelving them no matter how nice the life is she’s created. He gets her to dare to try.

Meanwhile, Sebastien’s experience with his father is reflected in how he thinks about Dan. I’m glad that Sebastien’s search for his heritage didn’t take over the story and derail it. It adds to the feelings he has for the place and for his relatives and gives him insight into how to be a father to another man’s son. The scenes in which he and Dan share excitement over cars, big flashlights and other male bonding stuff are charming. Dan is a great character too who sees the world from a six year old boy’s point of view. He’s not a plot moppet either but is obviously first and foremost in his mother’s world as he comes to be in Sebastien’s. The scene of Ella breaking down and tearfully asking Sebastien if she’s a good mother to keep her boy at this remote French farmhouse when he could live in comfort with his grandparents in Barcelona is a great bonding moment between the two as Sebastien tells her she’s giving Dan far more than money could ever buy him – something Sebastien knows from experience. For a moment at the end, I was worried that you were throwing a spanner in the works just for more drama but it quickly turned into a moment where Sebastien got to bond some more with Dan and then reassure Ella that she could have her dreams as well.

Sebastien makes a telling comment about how this is the first time he’s visited his mother’s grave in 18 years and it’s Ella he takes with him. He also feels like he’s home – not just in a house that has all his tech stuff but really *home* and I kept thinking towards the end that since bringing high tech and communications to remote places under difficult conditions is what his company is all about, I can see him doing this and still not spoiling the remote farmhouse in the Camargue. It’s win/win.

The book has no sex but to me it’s not needed. Even the kissing comes late in the book but by golly when it gets there, it means something – to Sebastien and Ella and to me. Instead of mindless lust, it’s true care and growing feelings of love. Usually I’m not one for quick romances but here I feel the connection between these two and love how you show it in little ways. Ella and Sebastien talk, really talk, to each other and about things that count and matter. Things they’ve not spoken to others about but which feel right to discuss with each other. One of the best examples of all this is the nice scene of them sitting by the marsh, enjoying the sand between their toes as they watch the flamants roses.

Into almost every review, a little rain must fall so here goes. I
must ask, what’s with the abundance of exclamation points at the beginning of the story? Sometimes two sentences in a row! Sometimes for sentences that I just don’t see the need to set off this way! It became wearying and I’m glad it seemed to tone down later on! I also wonder why Sebastien never called Ella on her assumption that he didn’t care for his stepmother and planned to duck out of her birthday party.

Sturm und drang, angsty romances aren’t what I’ve been reaching for lately so this book is great for me. “The Last Summer of Being Single” is a sweet romance between nice people whom I would enjoy knowing. Nobody acts like an ass at any time. No one storms off in a snit over anything trivial. No one misunderstands something that derails the romance for another 4 chapters. It’s such a relief and was a quiet, happy find for me. B

ps – is Milou a petit or grand basset griffon vendeen?