AmyB Reviewsfaerie / Paranormal / Young-AdultComments Off on REVIEW: The Iron Traitor by Julie Kagawa 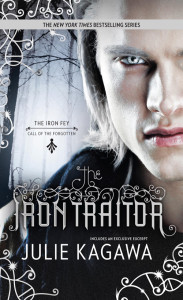 I was a fan of your first book “Iron King,” which I received at an RWA conference awhile ago, and then as I completed the next two books, my interest sort of lagged, and I don’t exactly remember why. I lost track of your books, but recently when your latest popped up on my radar, I had to take a look. Although I ’m glad I did, readers here should know that this book is definitely no romance.

Ethan Chase is recovering from being fairy-napped for the second time in his life. He’s still digesting several discoveries, among them, that his missing sister has become a faery queen herself and has a son as the same age as him (because of weird fairy time). It also didn’t help that he vanished from the mortal world at the same time as rich and popular classmate MacKenzie St. James. Their shared experiences of nearly dying in the faery realm have brought them together and they intend to stay together. But when Ethan gets sucked into more dangerous fairy complications, his relationship with MacKenzie is tested.

Ethan is a compelling character and I like how he makes stupid teenage mistakes as is fitting. He allows his nephew’s faery girlfriend Annwyl to stay in his room and heads off to fairyland all the while telling MacKenzie to stay behind. Concerned about her safety and his nephew Keirran’s problems, he fails to realize what the situation might look like to MacKenzie. And when MacKenzie and Ethan meet up in fairy land, a difficult yet mature conversation is had that shows how these two former loners are still trying to adjust to being part of a couple.

Throughout the story, Ethan and Keirran are presented as two people in similar situations with opposing views, and it is interesting to see how they react to each other. Both Ethan and Keirran have loves who are destined to die, but Keirran is the type who will destroy himself in making fey bargains to save what he loves. Ethan, on the other hand, has had a life long suspicion of the fey and tends to be more about letting fate take its course. His back history was well woven into his present day reactions. Usually, I’m on the side of ‘love will conquer all,’ but in this story, I found myself rooting for Ethan’s point of view. Sometimes all that you have is all that you have and you have to treasure what you have before it fades away. Unfortunately for Ethan, the fey are not going to let him do that with his terminally ill girlfriend Kenzie.

Kenzie, though pretty and popular, is living with the knowledge that she has terminal disease. Though the characterization of Kenzie nearly veered into the background-jealous-girlfriend trope at points, for the most part, she had her own motivations and her reactions were firmly rooted in the character you had established; someone who wasn’t afraid to risk danger because her life was limited already.

Kierran is great as the dark foreboding character, but for some reason the relationship between him and Annwyl didn’t intrigue me as a reader. You go in to the story knowing that they are deeply in love and devoted to each other, despite the fact that their relationship is forbidden by complicated faerie court politics, but there isn’t much more development beyond Annwyl’s being the victim in need of saving and Kierran’s obsession with saving her life. There are glimpses of Annwyl being a once rather formidable faerie herself, but not enough. I would have liked to have found out more about how those two got together, but perhaps that was in a previous book.

It was hard for me to tear myself away from the early part of this book, but as I read on, the glamor seemed to kind of fade. I’m still trying to figure out why. It wasn’t that the plot wasn’t exciting and engaging, on the contrary, I think it was a little too teenage dramatic. The pace of the plotting felt emotionally relentless, in a way that I’m not quite used to. I suppose that makes sense since this is a YA after all. Maybe it’s also because although I enjoy all sorts of books, I am a romance reader at heart.

And maybe it’s because I like happy endings and despite the title, I thought there was a chance that Kierran would not betray Ethan as he did.

I really wanted some kind of closure, but the cliffhanger ending was a bit much for me. I enjoyed it while I was reading it, but I don’t know if I would want to come back to this. I think if I was a young teenage girl, I would totally be obsessed and hooked on this series, but right now, I’m on the fence about whether I’ll pickup the next book.

→ Amy
Previous article: For Love of A Hero
Next Post: What Jayne’s been reading and watching in September/October 2013