REVIEW: The Hierarchy of Needs by Rebecca Grace Allen 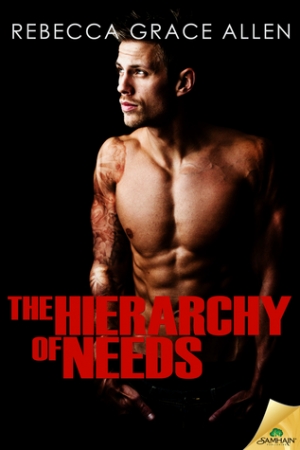 I rarely read a book straight after seeing the blurb on Goodreads or an online bookstore and it often happens that by the time I get to actually read the book I don’t recall anything about the story.  (May I just say I *love* it when the blurb is at the front of ebooks? Because that makes my life so much easier. Alas, the blurb was not in the front of this book.)  So, when the book started and Jamie went to have drinks on the beach with some friends, one of whom was Dean, a guy she’d been crushing on for ages, I wasn’t 100% sure he was the hero. I was half expecting that it was going to be one of those stories where the heroine’s head is turned by someone new and she realises that the guy she thought she loved was a douchebag after all.  When I first met Dean, he did seem like a little bit of a douchebag to be honest.  I went to Goodreads and checked the blurb and found out that yes, actually this is a friends to lovers story and Dean is the hero so I cut him some slack and dove back into the book with my “hero-vision” properly aligned.

It turns out I had met both the protagonists in the earlier book in this loosely connected series, The Duality Principle, which I reviewed here late last year.  I’d forgotten of course because who can remember these things?? Jamie Matthews is the best friend of Gabby Evans, the heroine of the previous book and Dean Trescott is besties with Connor Starks, Gabby’s hero.

Jamie and Dean are also best friends. There was one night in high school where they made out on the beach but then the next day Dean told Jamie that it was a mistake and they should just be friends and that was that.  Jamie has held a torch for Dean ever since but he’s not interested so she tries to hide it.  Dean is very popular with the ladies and is a huge flirt.  When he is flirtatious with her, she puts it down to him being unable to help himself when there is a female about and if she’s the only one available, obviously he’s going to have to flirt with her.  It hurts her and thrills her at the same time. Their make out session was the best sex she’s ever had and she recalls every scorching second.

So, my first impression of Dean in this book, was of someone who flirts with anything in a skirt and who is heedless of the feelings of his best gal pal.  He also appears to drink too much and his gorgeous body is getting a bit soft from all the beer.  I’m afraid, without knowing the set up, I thought those things were code for “not the hero”. Silly me.  (Also, wow, I’m so judgemental!)

What enabled me to see Dean as the hero was spending some time in his head.  When he took over the book, I could see that he feels deeply for Jamie but he also wants the very best for her. He feels stuck in Portland, in his dad’s failing auto body business and becoming more and more ground down by unrelenting pressure and failure. He’s always seen Jamie as a star and he wants her to shine. He doesn’t think she can do that with him. His own parents split up for much the same reason – his mother was stuck in a place she didn’t belong and eventually got sick of it and left. That experience scarred Dean and he can’t help but think if he tries to have a relationship with Jamie, history will just repeat itself.  He doesn’t want to do that to either of them.  At least this way, they have each other as friends, right?

Dean hasn’t exactly been pining for Jamie. Over the years, he’s definitely earned his reputation as a player. He doesn’t make promises he doesn’t intend to keep and he is not interested in a relationship. But he loves sex.  He has a rather unique turn-on; he loves to give a woman pleasure. He gets off on it.  He pays careful attention to what whichever woman he is with likes and doesn’t find sex satisfying unless he can push her buttons too.  While he quickly learned Jamie’s turn-ons, he hasn’t shied away from exploring his ‘talent’ with plenty of other women.

Jamie, like Dean, feels stuck too.  Jamie is the only girl and the youngest in a family of high achievers. Her three elder brothers are doctors. She was a talented college swimmer but not quite talented enough to go to the Olympics. She’s not terribly academically gifted and her secret desire to pursue fashion designing was shot down by rejection letters from New York schools some years ago. She’s living at home and coaching swimming at the local pool but she’s not really doing anything with her life. She is at a crossroads and is trying to decide whether to revive the fashion dream somehow or to take a job as assistant manager at the pool.  The latter is a job which she wouldn’t hate exactly. But it wouldn’t fulfil her either and it doesn’t have much of a future.

Dean’s father runs the auto body shop and basically ignores every suggestion for improvement Dean makes. The shop is going deeper and deeper into debt and Dean’s dreams of photography or restoring custom cars seem to have died a lonely death.

So, both Dean and Jamie are dealing with heavy things and are lamenting the end of summer.  Even with all the doom and gloom, Dean and Jamie have fun together when they hang out. She enjoys pranking him (in harmless non-vindictive ways) and they flirt with each other and roll around like puppies, all while each believes the other is not for them.  Of course, everyone else knows they are made for each other and anyone observing them together can see that both of them want to be together – their bodies tell the truth when their words lie.

A couple of flirtatious near-misses lead to Jamie proposing the old romance chestnut of “let’s fuck it out of our systems” (girl, that never works!). Dean has to go away for a weekend for work and they decide to have a no strings fling for the duration and afterwards, go back to being just friends.   The story isn’t really anything new. The fun of it is in the execution.

Dean and Jamie have wicked hot chemistry in addition to their deep friendship.  Finally letting the genie out of the bottle causes both to re-examine some things about their lives.  In addition to sex though, the forced proximity ends up encouraging both to reveal their fears and hopes and dreams and, between the two of them (mainly, it has to be said, Jamie) they come up with some plans which could change their individual courses, if only they’d take a risk.

Jamie has always felt like the under-achiever in her family. She feels she was the “oops baby” and that her parents are disappointed she hasn’t made much of her life. Dean sees her so very differently. When he is revering her body he is also trying to impart something to her as well.

He kissed her fully, over and over, and she dropped her hands to clutch his hair. Dean closed his eyes and concentrated on the way she moved, how she tried to gather more of the sensation, body arching off the wall. Every reaction notched his need to epic proportions, but he held it in check. Making her come wasn’t enough. He wanted to take this glorious girl out of the corner she’d let herself get put in, and make her see herself the way he did.

It isn’t just sex for either of them.  Of course it takes them a little while to admit it (but, fortunately, not too long).  At 130ish pages, the story is neatly told and nothing feels particularly dragged out. I liked that attention was paid to Dean and Jamie outside of their relationship with each other and that their HEA included resolution of some of the problematic familial relationships and firm decisions regarding their careers.  Ultimately, those things were barriers to the couple being together, so it was only fair that those things be resolved – even though it was apparent in the story that Dean and Jamie already loved each other regardless.

It’s not particularly ground-breaking but I liked the characterisations and, once I spent some time in Dean’s head and realised he wasn’t actually a douchebag (he just sometimes did a good impression of one), I enjoyed the romance. Their chemistry is hot but their clear connection goes much deeper than the physical. Grade: B.