I really love this series. It has a fun, sexy tone. My very favorite is the Carson / Holly romance in Heat of Passion (mini review here). It’s a novella but you pack a believable romance filled with super hot sex scenes. Feeling Hot is the romance between Jennifer, Carson’s little sister. She’s a bit flaky and her family still treats her like she’s a kid. When her last bad decision comes in the form of an ex turned stalker, Carson directs one of his subordinates to watch over her. 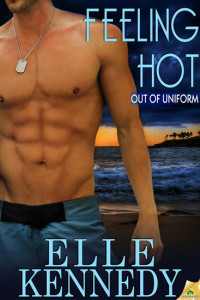 Cash McCoy has just returned from six months of celibacy during missions overseas and would like to relax and enjoy a little R&R.  He ends up at a bar but none of the usual women are doing it for him and he ends up hiding out in a back room to avoid one over eager barfly.  Inside he finds a gorgeous woman and they engage in cute banter and one thing leads to another.  Except Cash loses her phone number.

Example One of cute banter:

“I just turned twenty-six, and I still have no idea what I want to do with my life.”

He shrugged. “I think everyone figures stuff out at their own pace. Eventually you’ll find yourself on the right path.”

She pursed her lips in thought. “But my porn-star name sucks. You know how you’re supposed to take the name of your first pet and pair it with the street  you grew up on? Well, our dog’s name was Boris and I grew up on Denton Street. Boris Denton. That sounds like a dictator.”

“I’m not even going to ask why you’d name your dog Boris.”

“Hell yeah. Or maybe an actor.” She clapped her hands together. “An actor who plays a cowboy. Can’t you see it?” Her voice deepened to mimic the movie- man voice from the previews. “One duel, one chance to avenge his pa’s murder…Cash McCoy in…High Noon Outlaw.” She grinned at him. “Maybe that’s what I should do—write the copy for movie trailers.”

Cash isn’t thrilled that he lost Jen’s number nor is he thrilled to be babysitting his commander’s sister, particularly when he has been warned away from her.  His admission to Officer Candidate School would be at risk, per a poorly veiled threat by Carson.  Cash, as all the males are in this series, is a horndog and he engages in all kinds of sexual shenanigans.  (And so do many of the heroines which is part of the fun of the series. There is absolutely no slut shaming going on in these books.*)  Obviously, the situation is set up for Cash to fail and Jen is determined to see that he does even if that means parading around the apartment naked, watching porn, or sneaking into his room at night.

Did I mention I think the dialogue is a hoot?  Example No. 2 between Cash and his teammate:

With a sigh, he brought the phone to his ear and said, “Hey, man. Now’s really not a good time.”

“Why? Are you washing your hair?”

Dylan laughed. “Seriously, why do you sound so weird?”

“I’m about to take my new houseguest out for some Choctastic Verryberry Swirl.”

“I don’t know what that means. Is that a code?” Dylan paused. “Are you being held hostage and this is your way of signaling me? Blink twice for yes.”

The major relationship conflict seems to arise from the secondary storyline which involves Carson and Holly and while I appreciated that storyline – that the happy ever after is often fraught with problems. However, I wished that there was a meatier story between Jen and Cash. Cash says that he doesn’t want to settle down and Jen makes no effort to be more responsible. She isn’t taking care of herself; Cash is.

There is a vexy m/m scene in this book and generally, I’m not an m/m reader but it was an incredibly sexy scene. They had all had a little to drink and the way the scene unfurled was believable.

Feeling Hot is a feel good book. It makes you smile and yes, the sex is scorching hot. An inferno as Cash would say.  It’s not a very deep romance and I think that when it tries to get too serious, it loses its charm. But lord, there are so many hilarious scenes in this book from their senior commander sending out an approved list of gifts that the men can buy for a baby shower to the gossiping men on the mission.  B

*I saw that one goodreads reviewer felt that there was slut shaming because Cash liked that Jen was innocent. I didn’t get that vibe at all. Jen plays the sexual pursuer for a good portion of the book.  In an early scene, Cash and his buddy are enjoying another girl (before he and Jen get together) and there is no degrading thoughts or feelings toward this other woman. When Jen told him that she hadn’t had pleasure during previous sexual encounters, Cash was mad at the men she was with who failed to pay enough attention to her needs. It’s possible I missed it, but I didn’t feel like there was any dismissive attitudes toward the women in this book for being pleasure seekers.

→ Jane
Previous article: Reading List by Jennie for July and August 2012
Next Post: Ebook prices are rising…and falling but the consumer’s in the driver’s seat