I will admit to not understanding the whole appeal of reality TV shows. Let’s go on national TV, make a fool of myself – or be made a fool of by the hosts, all for …what? Fleeting D list fame? Nope, not for me. And not for our heroine Mattie Johns either. No, it’s gonna take potential bankruptcy and a chance at a shitload of money to get her onboard with the program.

“When man-eater Mattie Johns agrees to star on a dating game show to save her ailing recruitment business, she’s confident she’ll sail through to the end without letting down the perma-guard she’s perfected from years of her love ’em and leave ’em dating strategy.

After all, what can go wrong with dating a few losers and hanging out long enough to pick up a juicy Ã‚ £200,000 prize? Plenty, Mattie discovers, when it’s revealed that the contestants are four of her very unhappy exes.

Can Mattie confront her past to get the prize money she so desperately needs, or will her exes finally wreak their long-awaited revenge? And what about the ambitious TV producer whose career depends on stopping her from making it to the end.” 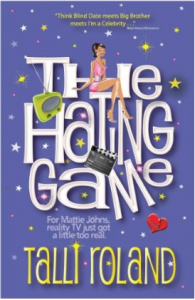 Call me strange but I actually relish that Mattie is hard to like. And I do think that some readers aren’t going to cotton to her or stick with the book long enough to see her thaw. She’s definitely a prickly pear but she stays true to the background you’ve given her and doesn’t suddenly go all mushy and emo. Even after she gets her true love and her business is saved, I still think she’s going to have a touch of “take no prisoners” in her personality.

She does have a history and though it might be repeated a time or two too many, it makes her subsequent dating practices make sense and even slightly exonerates her implosion when she thinks Kyle cheated on her. But I do have problems with the fact that Kyle realizes Mattie actually responds well to men taking a chance and being strong in the relationship and yet he hasn’t found a way to get Mattie to listen to him before the crazy show comes along.

I love the show idea that Nate comes up with and can easily see ratings mad executive types monkeying about with it as described. And speaking of “powers that be,”
Silver is a nightmare. The movie “Network” comes to mind about all this. It was right in the day and is still correct today. TV networks are scum. The character of the drunken host used for the studio bits is a scream and I kept picturing Bill Nighy in that role.

The way you turned the tables on the dating order and who wins the two weeks with Mattie is a nice twist. I didn’t see that coming but it all works in with the way the producers have manipulated things up til then. I felt sorry for Charlie and how the show might have caused him so much grief. Giovanni turned out to be more fun than I anticipated. But how could Adam have lost a stone or more of weight so quickly? Or gotten chiseled muscles? I simply don’t see that he had enough time.

Mattie’s best friend Jess was little Miss Downtrodden and Ignored with the spine of a wilted cabbage for most of the book. I hope they both realize that their relationship needs some serious work as it seems codependent for the both of them and not in a healthy way for either. And prawn crisps? I agree with Jess that these sound revolting. I kind of guessed that she and a certain person might end up together and was glad to see Said Person had enough of a conscience to do the right thing in the end.

You set up the conflict between Kyle and Mattie with some pretty harsh stuff and I wondered how anyone could get back together despite all that. But then the truth comes out and in a believable way. I’ve read that it takes 10 positive words to negate 1 negative one which helps explain why Mattie is ready to believe Chloe rather than Kyle. Since this seems more of a next generation Chick Lit book than a standard romance, I was ready for the action to center on Mattie rather than Mattie and Kyle but a little more time spent from his POV would have helped explain why he was so willing to go through all he did to get her back.

I did enjoy the fun factoids that start each chapter. Quite eye opening and amusing.

Even if no one got the  £200,000 prize money, all’s well that ends well – especially the “torture by clown show” fate for one character. Though I want Silver to be attacked by a shiver of sharks or maybe a fever of sting rays. One lives in hope. B

→ Jayne
Previous article: FIRST PAGE SATURDAY: Untitled Women’s Fiction
Next Post: Is the Cloud the Answer to Piracy and other tidbits I took from Tools of Change 2011