REVIEW: The Girl Who Chased the Moon by Sarah Addison Allen 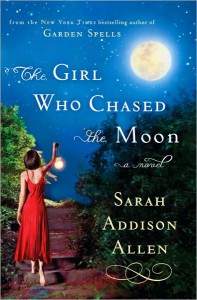 I’ve wanted to read you for a long time and when this book was hand delivered to me when I was in NY, I felt like I had no excuses but to read it. I’ll tell you that it was a lifesaver. As I spent almost 10 hours at La Guardia due to weather complications, at least I had a good book to read.

Emily Benedict was brought to live with her grandfather in a small town of Mullaby, North Carolina. It’s a town of oddities. Her grandfather is almost eight feet tall. Her bedroom wallpaper changes, frequently. Everyone has its secrets. Her mother was involved in something scandalous involving the Coffey family, so scandalous that the townspeople’s long memories have pegged Emily as an outcast before she even has time to set foot in Mullaby. But people’s recollections of Emily’s mom don’t fit with the social do gooder that her mom was before she died. What Emily comes to realize was that she was her mother’s chance at redemption.

Her neighbor, Julia Winterson, befriends Emily. Even though Emily’s mom was one of Julia’s high school tormenters, Julia recognizes loneliness when she sees it and it radiates from Emily. This story is all about second chances. It’s about Emily’s mom’s second chance lived through Emily. It’s about the Win Coffey defying his family’s orders to give his people a second chance. It’s about Julia, who bakes her cakes for a lost love and not the most recognizable loss either.

Like most romance books, this one has its happy ever after, for Julia and for Emily. With all the reconciliations and redemptions, the story had several opportunities to be too sugary but the writing kept it from falling into the treacly sentimentality. In part, I suppose, because the characters had all suffered so tremendously that a little happiness was something that they all needed.

It’s a lighthearted read for all the serious subjects that it contained. I was suprised, too, at how recognizable some of the romance elements were such as Emily and Win Coffey’s instant connection (soul mates anyone) or Julia’s old romance with the high school golden boy when she was the high school outcast. I wish some of the themes had been taken a little farther, given it a little more depth. For example, there was a thread about the sins of the father being revisited on Emily and her new friend, Win Coffey, but it wasn’t addressed in any significant way. It’s like Emiliy being befriended by Julia and then Win made the years of resentment melt away.

At times, though, I wondered if the eccentricities of the townpeople were taken too far. Why was it that the bedroom wallpaper changed? How did it come to be? Why was that, on top of everything, necessary? Was the Coffey secret too–Twilightish?

I enjoyed this story and believe, based on the prose and the feel to the book that I’ll like your others too. Thank you to the book fairy that gave me this book. B

| Nook | BN | Borders |
Fictionwise | Books on Board only the audio version

Proviso: Apparently Random House hasn’t reduced the ebook price for this book yet but the trade paperback was supposed to be published on the 16th of March so hopefully the prices will have reduced by the time this review goes up.