REVIEW: The Girl on the Train by Paula Hawkins 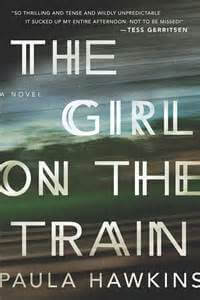 It’s never been my habit to read New York Times bestseller books. I will resist The Da Vinci Code until my last breath. But as romance has lost some of its appeal for me, I have found myself giving some of those buzzed-about books a try, here and there. I really liked Kate Atkinson’s Life after Life and I found Gone Girl hugely entertaining. More recently, I loved The Goldfinch and Station Eleven.

In the first reviews I read of The Girl on the Train, many comparisons were made to Gone Girl. Indeed, the two books both deal with how difficult it can be to really know a person, even (especially?) one you’re married to. But while I found Gone Girl darkly amusing, The Girl on the Train was just plain dark.

The novel has three first-person narrators: Rachel, Megan and Anna. Rachel is the main narrator and the story begins, after a brief prologue, with her. She’s in her early thirties, divorced, and living with a friend in a suburb of London as she tries to get back on her feet. Rachel is also a raging alcoholic, and she takes the train into London every day so that her friend and roommate, Cathy, won’t know that she was fired months before after drunkenly insulting a client.

The train Rachel takes often slows down near a row of houses where she likes to observe an attractive young couple, Jason and Jess, on their terrace. At first it seems as if Rachel knows them, since she soon reveals that she used to live four doors down with her ex-husband,Tom. Tom now lives in the same house with his second wife, Anna, whom he left Rachel for, and their new baby. Rachel focuses on Jason and Jess as a way to avoid the pain of observing her own lost house, her own lost life.

It soon emerges though, that Jason and Jess and the elaborate backstory Rachel initially relates regarding them (Jess is artist; Jason a doctor) is a fiction; it’s all in Rachel’s head. They are actually Scott and Megan Hipwell, and when the story switches to Megan’s point of view, we realize quickly they aren’t the blissfully happy marrieds Rachel imagines them to be. Rachel discovers this for herself, when she sees Megan kissing a man who is not Scott in her backyard one day as the train passes Megan’s house.

Soon after, Megan goes missing. Rachel becomes obsessed with the mystery of what happened to Megan and what information she, Rachel, might have about her disappearance. Not only does she believe she alone may know of Megan’s secret lover, but Rachel was herself near the Hipwells’ house on Blenheim Road the night Megan is believed to have disappeared. She was drunk and blacked out, coming to back at Cathy’s house with mysterious injuries and the troubling sense that something bad happened in the underpass between the train station and Blenheim Road.

Rachel tries to takes her concerns to the police, but they dismiss her as unreliable, a drunk and an attention-seeker who is pathetically trying to make herself part of what’s become a big news story. Frustrated, Rachel decides to contact Scott Hipwell directly. Though he’s a suspect in his wife’s disappearance, Rachel’s empathy is with him, the cuckolded spouse; she’s sure he’s innocent and that the police should be focusing on the mystery man she saw kissing Megan.

As I noted previously, Rachel is the main narrator of The Girl on the Train, and she’s the main liability of the story as well. She’s not just a drunk: she’s delusional and child-like in her thinking, and I found her very hard to empathize with for much of the book. Megan, the second narrator, isn’t much better. She actually has a better-developed backstory, one that unfolds slowly and gives some context, at least, to her choices. But she’s also hard, ego-driven and self-destructive. Anna is the least sympathetic of all; her narration reveals her to be shallow, selfish and mean.

The men don’t fare much better – Tom is an adulterer at the very least, and seems at times to be playing mind games with Rachel, giving her just enough attention to keep her hopeful. Scott shows his ugly side when cornered, and it was never quite clear to me how controlling he was towards Megan – how much of it was her (or others’) perception of him vs. reality? Megan’s therapist, Kamal, also a suspect in her disappearance, actually emerges as one of the more sympathetic characters in the story.

So one of the themes of The Girl on the Train seems to be how ugly and pathetic people really are underneath their facades; not exactly a cheery message, nor one I want to read about much. Again, one could argue that Gone Girl had a similar message, but Gone Girl felt…campier? less real?….and thus less dreary. It had a scabrous humor to it; about the only moment of humor I noted in The Girl on the Train was Rachel’s disappointment at finding out that Scott is not a medical professional with Doctors without Borders as she’d dreamed but a plain old computer tech (“I can’t bloody believe Scott is an IT consultant”).

Which is not to say that The Girl on the Train is brutally realistic; there are definitely improbable twists and turns, and one of the main points on which the plot turns, Rachel’s tendency to black out while drinking and not remember anything afterwards, seemed convenient and perhaps unrealistically presented.

All that said, the book has its strengths. It’s smoothly written. It worked for me as a suspense novel – as the story went on, I did become quite invested in the resolution of the mystery. I wanted to know what happened to Megan and why. I also wanted to see if Rachel would ever grow a backbone and get herself together. One of the negative reviews I read on Amazon stated that the reader had figured out the villain very early in the story, but I didn’t. I mean, with a limited number of potential suspects, I’d definitely considered the person, but the larger resolution to the story unfolded pretty naturally and I definitely didn’t figure it out way ahead of time.

One last quibble – it may seem petty, but the title rings false to me. The Girl on the Train? Rachel isn’t a girl. She’s about 33. She’s not at all girlish; if anything she has the air of middle-age regret and disappointment of someone older than her actual age. I could see calling mid-20s Megan a girl, but not Rachel. Anyway, my final grade for The Girl on the Train is a straight B.