REVIEW: The Gift by Eva Cassel

I'm always looking for good f/f/m and this story was recommended to me by another reader.   The only other Harlequin Spice short I've read, Tonight, My Love, by Tracie Sommers, was very memorable.

The Gift is sexy, unique, and well-written.   It opens with Mia and her husband, Evan, at a cocktail party.   They've been married ten years and still have that spark.   The sex is fantastic because they both like to mix it up and keep things fresh.   I loved the portrayal of their relationship as erotically charged and never complacent. 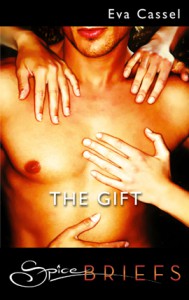 At first, Mia hesitates.   She wants to watch, not join in.   She'd also rather have a male masseur for herself but she chooses a female for Evan.

As a reader who bought this story for the f/f content (which isn't easy to find at a mainstream publisher!), I stumbled over Mia's thought processes.   The last thing I want to read about is a reluctant three-way.   In order for any sex scene to work for me, the participants must be willing.

Most of this story is sex, and everything below can be considered a spoiler.

I feel deflated.   This isn't a steamy ménage!   Why is there is a superfluous masseuse?

After Evan ejaculates all over the main masseuse, who is wearing a sporty outfit (because she's a professional), it's Mia's turn to be stimulated.   We finally see the reason for the second worker-‘to penetrate Mia anally with a sex toy while the first one penetrates her vaginally.

If my description sounds clinical, it's because the scene reads like an explicit and well-researched sex manual.   The women reminded me of nurses performing orgasm surgery.   Mia and Evan don't talk to or touch each other during the encounter.   She watches him; he watches her.   Then she's blindfolded, and they can't even make smoldering eye contact anymore.

I think I get what the author was going for.   The couple has made it a habit to separate at social functions, not giving in to the urge to chat or hold hands.   Once they get home, they're all over each other.   Staying apart actually brings them closer together.

I can appreciate the craft of this story, and the author's intent.   Mia's chemistry with Evan is scorching and her arousal is described in lush sensual detail.   But the truth is that the scenario didn't work for me on multiple levels.   Let me break them down.

On the other hand, the above elements are a matter of personal taste.   The story might work better for a reader who isn't into f/f.   Kissing creates intimacy, and most m/f fans don't want the heroine to have a full-on lesbian encounter.   The extra woman cuts that tension by making a ménage unlikely.   Mia's climax as the finale can be considered female-centric.

I was looking for spicy f/f/m and probably wouldn't have been satisfied with anything less.   The Gift turned out to be a different package altogether.