I’m very much a genre reader. It’s not that I have anything against the more literary-minded novels. It’s just that they’re not my thing, the way westerns and soulbonded lifemates aren’t my thing. But the premise of your debut intrigued me. A paranormal novel set in late 19th century Malaysia about a girl who has to marry a ghost? That is right up my alley. 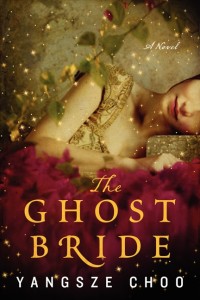 Li Lan’s family has seen better days. Not only has her father succumbed to his opium addiction, he has racked up numerous debts that will be their financial ruin. Then a rich family friend — who just happens to hold all the debts her father owes — makes a startling proposal: that Li Lan marry his only son. The catch? The son, Lim Tian Ching, is dead.

While such ghost marriages aren’t unheard of, the circumstances are unusual to say the least. The son isn’t a vengeful ghost whose spirit needs placating. Since Li Lan is very much alive, this isn’t a case of two recently deceased people being joined in matrimony posthumously. Li Lan would, in effect, have to live as a widow for the rest of her life.

I admit I initially was unsure about this book. I loved the depiction of Malacca in 1893. The culture felt alive and authentic to me. The set-up may seem familiar. A once-affluent family that’s fallen on hard times. A father who’s fallen prey to opium. A loyal servant who’s no-nonsense and acts like another mother. A heroine who’s over-educated and doesn’t know how to use her good looks to their full effect. An unwanted marriage to save the family. But the details make all the difference, and I thought this was a great example of how culture affects situations and relationships. Malaysia in the late 19th century is not the same as England during that time period, and characters living in one setting should not act like those living in the other.

Despite my love of the setting’s portrayal, I found the first half of the novel slow. In theory, it should have been right up my alley. Because Li Lan’s household is justifably hesitant to accept the offer to become a ghost bride, the Lim family exerts more pressure upon them to agree. As a result, the connection between Li Lan and Lim Tian Ching strengthens and his ghost begins to haunt her. This should be stressful and scary but I didn’t find it to be so. To be honest, I found it tedious at times.

Even Li Lan’s introduction to the spirit world was a slog for me. Again, I thought the portrayal of the spirit world was amazing. The descriptions of the ox-demons were vivid, and the hungry ghosts were creepy. But I felt no pull to keep reading and had to push on because I wanted to see where Li Lan’s journey would lead.

That turned out to be a good choice because while the first half proved to be an average read, the second half of the novel was anything but. This is that rare case where I felt like my effort to keep reading was rewarded in full. I’d actually say the structure reminds me vaguely of Code Name Verity, in which the second half is the payoff to the first but you need to read the first half in order to care about what happens in the second.

Maybe my ambivalence towards the first half can be partly explained by the romantic subplot from that section. Li Lan is trying to find a way out of the ghost marriage and her dead suitor who has taken to courting her from the afterlife. During her attempts to break the connection, she meets Lim Tian Ching’s cousin, Tian Bai, and is immediately attracted to him. In a sad twist of fate, Li Lan was originally betrothed to Tian Bai but with Tian Ching’s death, the cousin became heir, thus nullifying their engagement since a penniless bride would hardly make an appropriate wife.

Normally, I’d eat this up with a spoon. Circumstances conspired against them! He has to marry an appropriate woman. She’s haunted by a ghost.  More to the point, Tian Bai is a good man. Not only is he more attractive than his cousin, the disagreeable Lim Tian Ching, he’s smarter and more industrious. Yet their relationship left me cold. It seemed rote and followed all the expected tropes and pitfalls.

Then later in the novel, we’re introduced to Er Lang. People who know their Chinese folklore will recognize that name, but I won’t elaborate here since I think that spoils some plot developments. I adored the relationship between Li Lan and Er Lang. It was challenging yet dynamic. I thought it was more interesting than that of the relationship with Tian Bai, which I can only describe as instalovelust.

Despite my initial impressions, I’m glad I stuck with this book. It was absolutely worth the effort. The depiction of turn of the century Malaysia was wonderful and while I certainly wouldn’t consider the romantic subplot a strong point, I personally found the resolution immensely satisfying. B