As Napoleon pursues his plans for the invasion of England, English operative Augustus Whittlesby gets wind of a top secret device, to be demonstrated over the course of a house party at Malmaison. The catch? The only way in is to join forces with that annoying American socialite, Emma Morris Delagardie, who has been commissioned to write a masque for the weekend’s entertainment. Even so, it should leave plenty of alone time with Augustus’ colleague (and goddess), Jane Wooliston, who has been tapped to play the heroine. Or so Augustus tells himself. In this complicated masque within a masque, nothing seems to go quite as scripted… especially Emma.

For the first time in years, I’ve actually got the latest “Pink Carnation” book read at the time of its initial release. Go me! This one varies slightly from the usual fare in the way the French are depicted and in that it’s not centered on the League that the Pink Carnation oversees – hence the lack of a “flower” title. We also get a glimpse of the personal life of the Pink Carnation which makes me wonder what you have in store for her in the future. 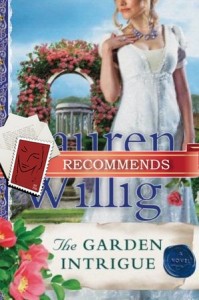 The use of the term “masque” for the entertainment that Augustus and Emma write must have been a deliberate choice since it points in the direction of what both main characters are doing – which is wearing many public masks. Emma appears to be the Merry Widow awhirl in the sophisticated social life of Paris and the circle surrounding the First Consul family. She is friends with or at least the acquaintance of all who are fashionable; she is sought after and looked for at all public events. But few know that this was initially to hide her pain from her marriage. When she eloped, her family was horrified and for a while cut communications with her. Her disillusionment with the marriage lead her to flee back to Paris to the arms of the de Beauharnais women who had been her friends for years. After her husband’s death, she wished to hide her grief. Now she’s been doing this for so long that it’s almost become second nature and she avoids thinking about whether it’s time to make a change. I like that Emma doesn’t take her grief and wrap it around herself like a beloved shawl. She has lost in love but she doesn’t cry off of it for future nor does she drag her past misery around like chains.

Augustus has actually got a set of masks to pick from. He’s worked as a secret agent for over ten years using the cover of his horrible poetry to convey his information to the English. The verse is bad enough that the Ministry of Police can’t force themselves to read it closely enough to see the truth but not truly execrable enough that they suspect a ruse. Writing to this level is a fine art, Augustus has found, though he never lets down his guard for fear a casual word or action will give up the game. His second mask is tied to the first in that lately he’s officially been using Jane Wooliston as his “muse” for this bad poetry while hiding from everyone his true feelings for her. It takes a young and silly new agent to start Augustus down the mental path where he starts to question how much longer he can play this game. It takes Emma’s pointed comments before he then wonders how much longer he actually wants to try.

These two have a lovely slow romance that I enjoy watching happen. Too often a couple is at odds for much of a book and then the authorial BAM strikes and I’m supposed to believe they’re in love. Here I can see it grow and eventually flower. It’s not painless, there are false starts and miscues but when each finally realizes it and admits it, I believe it. Emma’s first marriage is also not what I’m used to seeing. She married young, in a haze of Young Love’s Dream and only later woke to the cold, hard realities of marriage. It took a lot of work and growing up before she was at a point to be ready to try again and attempt to make something of the relationship. And then Paul died. So here’s a marriage that had its rocky spots, where both loved each other and the only villain was youthful naivete and unrealistic expectations. It’s nice that Paul isn’t forced into the villain role in order to make Augustus look better.

In many of the earlier books in the series and in almost all the Regency era books I’ve read that focus on the Napoleonic Wars, the French are portrayed as badly at best and as demons at worst. What a refreshing change we see here. Emma is American so at this stage of the conflict, she doesn’t have a horse in the race. She doesn’t hate England so much as it just doesn’t mean a great deal to her. But the French and France? Ah, those she loves. After living there for 10 years and being befriended by Hortense de Beauharnais and her mother, Emma feels at home there and has no desire to act on the lures cast by her mother to get her home to New York. Emma also wanted to continue the work begun by her husband – that makes me think of the movie Ridicule – of draining the marshland around his family estate. It’s in studying his plans and those of the American inventor Robert Fulton that she gains her knowledge of engineering that stands her in good stead when Fulton arrives at Malmaison with whatever it is that Augustus has to discover. How funny is it that she’s the one who has to explain it all to Augustus!

Jane Wooliston is shown in a new light to me. It’s only after Emma divines Augustus’s feelings for her that Emma reveals some intriguing things about Jane. And as Augustus bares his heart to Jane after which Emma scolds Jane for her reaction, Jane shows a coolness about romance that might be the stepping stone to a bang up book. Is she really as those two see her here? Or are there hidden depths to be uncovered? While I was intrigued about what’s in store for Jane, I was confused about another secondary character. Georges Marston shows up as someone from Emma’s past who is initially painted in tones of menace. He does pop up at needed times in the book to be slightly threatening, but ultimately either I misread him or his part in this book really fizzled out. He seemed like he’d play a larger and darker role than he – at least to me – does.

I found that the modern sections, with Eloise and Colin facing off the American film crew which has invaded Colin’s beloved Selwick Hall, captured my interest and seemed to move their relationship along more smartly than in “The Orchid Affair.” It’s still “fits and starts” as compared to the historical stuff but finally these two are settling deeper into coupledom.

Though this is a long running series, you keep it fresh by not concentrating on the same set of people and by limiting “guest appearances” of past couples. The settings change as well from England to India and now on to France. I don’t know what’s next but I do know I’ll be eager to find out. B