REVIEW: The Game and the Governess by Kate Noble

A few friends of mine have been recommending your books to me for a while now, and so this summer I got The Game and the Governess. 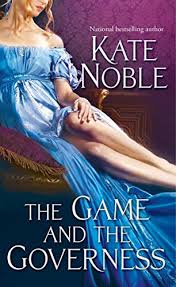 The novel begins in 1817, at Mrs. Beveridge’s School in Surrey. Phoebe Baker, a young lady educated at the school, became a charity pupil when her father’s fortune was stolen by his secretary, Mr. Sharp. Now the school term is coming to a close and eighteen year old Phoebe, whose father died shortly after losing the money, must make her own way in the world.

Phoebe writes an angry letter to the man she blames for her misfortune, the Earl of Ashby. The earl once employed Mr. Sharp, the same secretary her father later hired. Lord Ashby knew Mr. Sharp’s character, since he too was one of Sharp’s victims, but chose not to bring Sharp to justice, in order to protect himself from becoming a laughingstock.

In her letter, Phoebe tells the earl that she holds him responsible for what befell her, and that if they ever meet, she will make him pay—not out of malice, but for justice.

Five years pass, and the next scene introduces Ned Granville, the earl. After being swindled by Sharp, Ned hired his good army friend John Turner to act as his secretary. John took the position on a temporary basis, intending to save the money needed to restore his family’s mill, but disasters struck and prolonged his service to Ned, and Ned, who doesn’t understand John’s desire to be his own man, will not loan him the money needed to fix up the mill.

One night, while Ned, John and a third army friend, Dr. Rhys Gray, are playing cards, “Lucky Ned” has a winning streak. A debate begins between Ned and John as to the nature of Ned’s good fortune, both with the ladies and otherwise. John deems it a direct result of Ned’s position as an earl.

The argument turns into a wager. John and Ned agree to trade places while on a trip to Leicestershire, where Ned must go to decide whether to sell his deceased mother’s house. While staying at a nearby estate owned by Sir Nathan Widcoate and his wife, Lady Widcoate, Ned will take on the role of the earl’s secretary and John the role of the earl.

If Ned can, while working in John’s position, successfully win a dance in public, a token of affection, and intimate knowledge from a lady, he will win the wager and with it, John’s mill. If he cannot, John will win five thousand pounds, enough money with which to fix the mill and quit the position of secretary. Neither man realizes Phoebe Baker is the Widcoates’ governess.

At the Widcoates’, Ned slowly catches on to the fact that a secretary is treated far less deferentially than an earl, and although the house is full of young female guests, all of them have set their caps for John.

Deprived of the privileges he takes for granted and rebuffed at every turn, Ned finally, when he learns the Widcoates’ young governess was brought up as a lady, sees his chance. He and the governess alone are housed in cramped rooms on the third floor, so he has ample opportunity to get to know her.

In the five years since she left Mrs. Beveridge’s School, Phoebe has learned to find the good in the world. Despite a position that requires her never to smile in public, Phoebe finds at least one absurdity in each day—something to laugh over, if only in private.

Phoebe loves the children she teaches, but realizes someday soon they will be too old to need a governess. She has been saving her money to purchase a ticket aboard a ship that will take her to her relatives in America and away from the exacting standards of her employers.

Years ago Phoebe gave up her vengeful plans for the Earl of Ashby, but his presence at her place of employment upsets her. Her feelings of uneasiness don’t extend to the earl’s oddly-behaved “secretary,” at least, not until he tries to steal a kiss.

Ned’s apology the next day is sincere and accompanied by a huge favor, and as she begins to become better acquainted with him, Phoebe realizes she is in danger of losing her heart—and possibly her position.

Will Ned win his wager with John? Will his eyes be opened and will he realize what a snotty jerk he has been? Will he realize his growing feelings for Phoebe have little to do with the wager? And what will happen when Phoebe discovers that he is the man she holds responsible for her own change in position?

In case it isn’t clear from the plot summary above, Ned begins the book as a spoiled, over-privileged ass with a sense of entitlement. He has a steep learning curve ahead of him and at first I found him hard to read about.

I kept reading not because I liked anything about him right away, but because I felt the narrative was conscious of his arrogant sense of entitlement and was heading for an interrogation of privilege, while Ned himself was heading for a rude awakening. Happily, this turned out to be the case.

Ned’s arrogance was not of the overbearing, dictatorial variety, but rather that of a jovial aristocrat blinded by his own privileged position and blithely unaware of the full effects of his actions on others.

Thus, when Ned arrives at the Widcoates’ estate and begins to get his comeuppance, it takes him a while to realize that the women in the household aren’t interested in his attentions. When he tries to play footsie with one guest and later to kiss Phoebe, he gets a couple of magnificent setdowns and one person goes even further to “put him in his place.”

Eventually the ugly truth does begin to penetrate Ned’s thick skull, and slowly he loses his sense of entitlement and most (but not all) of his arrogance. He also learns to enjoy working for what he wants, and to feel empathy and appreciation for people not of his status. This transformation is at times subtle, but it’s there, and while I didn’t fall in love with Ned at any point, I greatly enjoyed watching him grow as a human being.

Phoebe is another story, in the sense that I loved her almost from the moment she reappeared in the book five years after being dispossessed. As a governess, she is neither a servant nor a lady of the house, and is therefore isolated and vulnerable.

Her intelligence and her empathy are both in evidence, and as she slowly begins to trust Ned, I became invested in the relationship and in my hope that he would treat her as she deserved, not just as an object for his wager with John.

It was a joy to see Phoebe bloom from the unsmiling governess into someone who could joke with another human being, confide in him, and come to trust him. But even while it was a joy, I was in suspense the whole time to see if Ned would prove worthy of her trust.

Phoebe and Ned both have affecting backstories. I won’t reveal them here, but Ned’s helped me understand and even sympathize with him, while Phoebe’s broke my heart. I waited with bated breath to see what would happen once Phoebe learned the truth of Ned’s identity, and I appreciated the exquisite suspense with which this was drawn out.

Another thing I enjoyed a great deal was that Ned and Phoebe weren’t immediately attracted to each other. Instead being gripped with instalust, the characters slowly become acquainted, which imbued the moments of physical intimacy with romance. That holds true of all but a sex scene that comes late in the book and feels shoehorned into the story.

The prose style was enjoyable as well. It has an elegant simplicity punctuated by humorous moments, such as Ned’s insistence on responding to everything—even setbacks—with the utterance “Brilliant! Marvelous!” which takes on a delicious irony when he doesn’t mean it in the least. I even liked the chapter headings, which read like something from the rulebook for a betting game, titles like “The first hand is played.” And “Sometimes, even a novice player has to wager everything.”

The book was heading for keeper status, but then came the final 15% of the novel, the first part of which contained elements that felt like they belong in a book from another genre.

The story briefly devolves into a different game – one of “Was it Colonel Mustard in the living room with the wrench?”

Once that’s over, there isn’t enough page space left to let the fallout from Edward’s deception play out fully, so we get a rushed and not entirely satisfying resolution.

Still, I was glad to read a book which does not treat all aristocrats as noble-hearted hero material and plays out on one level like a courtship between a governess and a secretary, where—equally refreshing—the main characters don’t ogle each other’s body parts or get hard and wet before they know each other. For its thoughtful sensibility, The Game and the Governess gets a B.