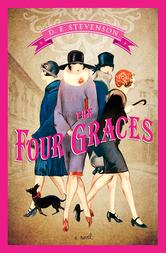 No Matter What Life Throws at Them, the Grace Sisters Always Have Each Other

The four Grace sisters—Liz, Sal, Tilly, and Addie—love their quiet life in the country village of Chevis Green. To some, their insular world might seem dull, but the sisters and their father, Mr. Grace, never seem to run out of conversation, jokes, and pleasant ways to pass the time together. They truly are the happiest of families.

I think had I not already been a fan of D.E. Stevenson in general and the Miss Buncle series of books in particular, I might have read this blurb and thought, “Hmm, how dull and uninteresting.” But since I’d already fallen for Stevenson’s gentle tales of country England before and during WWII, I clicked the buy button without a moment’s hesitation.

Set in the bucolic village of Chevis Green and close to Wandlebury, the story picks up not long after “The Two Mrs. Abbotts” though readers new to Stevenson need not worry about starting here. A few characters from previous books appear but their backstories are quickly sketched in and then it’s back to the four young ladies who give this book its title.

The young women are daughters of the local vicar or “Passon” as the villagers call him. Happy in their home and family lives, they’re content as they deal with wartime rations and the wedding of the new Squire who hyphenated his name in order to inherit the Chevis estate while slightly less thrilled with the two young men who wander into their lives courtesy of their father’s absentminded invitations and their dread Aunt Rona who knows everyone and everything and isn’t shy about announcing it.

“The Four Graces” has that happy charm which I fell in love with while first reading about Miss Buncle. Issues arise and are gently dealt with, life flows through the village while standing in line with your ration book or making sure there’s a clean start to the children’s footrace during the annual fete. And swirling through all this are two romances which kept me guessing about who would be paired with whom. When all was said and done, it makes perfect sense who says “I love you” to whom and while one marriage is hurried due to wartime postings, the other serenely takes its time to develop.

I did wonder if perhaps Stevenson had plans for the two unmarried sisters which never came to be written. Unless anyone can tell me differently, I’ll mentally match one with the ankle judge and conjure up some dashing serviceman from London for the other sister.

A fast and funny book, “The Four Graces” is a great finish to a delightful “series” and could stand as a fine introduction to Stevenson’s work. It’s a sweet look at village life which was in the process of changing and probably changed forever after the war. As is usual with her books, it’s filled with both charming and eccentric characters and could serve as a blueprint to navigating village politics. It also goes to show that a cup of tea can fix any problem. B