REVIEW: The First Boy I Loved by Cheryl Reavis 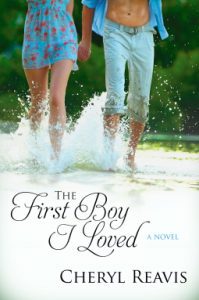 Vietnam took her first love away from her. Now it may take her next love, too.

After her husband dies, Gillian Warner realizes how many sorrows she carries inside her, including unresolved grief over her first love, who died in Vietnam decades earlier. Haunted by his death in combat and a tangled web of guilty secrets, she books a guided trip to the battle site. The tours are led by cynical Vietnam War vet A.J. Donegan, who makes his living taking naïve Americans on what he calls Guilt Trips, Inc. If they’re looking for peace of mind, they can forget it. A prickly attraction sparks between Gillian and Donegan, with neither able to let go of the past without the other’s provocative challenge. In a test of willpower and desire, they’ll have to share much more than a journey to a place and a memory; they’ll have to travel deep inside the walls they’ve built around their hearts.

I periodically read your website to check what books you’ve got coming out and remember reading about this one years ago. Then came lots of waiting. Many other books were released but not this one. So I waited some more and had almost given up on ever getting my hands on it when I saw it listed at netgalley. Yes, finally! – cue excited squees.

I have a soft spot for older couples finding love, especially if they’ve loved and lost before. Donegan and Gilly both qualify for that description. However since they also both came of age during the Vietnam War (or the American War as the Vietnamese know it) both also have war wounds and must hang on to each other as they veer and stagger towards healing and peace.

I laughed at the way these two interact. They are honest past superficial, time wasting manners with each other. Neither pussy foots around with bullshitting but cuts to the chase. Gilly reminds me of many no-nonsense nurses I know – they have heart, care deeply and are dedicated to their patients but they see right through any subterfuge and will call you on it in an instant. Donegan is like many veterans I have met – blunt and direct. They compliment each other despite their different professions.

While I’m not quite of this age I am close enough to remember a lot of it. The nightly news with Walter Cronkite giving the days totals of dead and wounded, the protests, the songs. The war – by whatever name – still haunts and scars people from both nations and will for their lifetimes. The vets have their stories they won’t tell and the sisterhood of grieving women still mourn, as women have always done when men go to war. The scene of the Vietnamese village women and Gillian letting the dam burst on their emotions was moving and powerful.

I enjoyed seeing Saigon and Vietnam as they are and were with the centuries side by side and overlapping. Donegan shows Gilly the real Saigon and the real Vietnam in all its beauty and ugliness. The proof of the ugliness is in what haunts him the most and the secret he finally reveals to Gilly. The beauty – it’s all around them and in the people they meet and share memories, grief and time with.

The book is filled with wonderful characters – some of whom are mere pencil sketches but what lifelike drawings they are. Madame An who made her French lover learn Vietnamese and now runs a 5 star restaurant and caters Donegan’s coffee. Dr. Nguyen who cares for orphans but still dislikes Americans because the American War killed her father, Mrs. Tran who survived the war and found and new husband and a new life on her boat, the women of Binh Duong who live their pain and the results of Agent Orange.

It’s painful. It’s funny. It’s a trip back in time and a time for healing or at least a start at it. There are things in their pasts which might not ever be resolved but part of life is accepting what can’t be changed and dealing with the grief and pain. The ending is more than HFN but not quite a HEA. Donegan and Gilly have both gone through some catharsis and are ready to commit to working out their relationship but I’m glad you didn’t force a rainbows and happy bunnies ending.

One thing I love about your books is that I feel what the characters are feeling and not because I’m told those are their emotions. Instead their actions and manner of speaking shows me and gets me to believe in their stories in a visceral way. I connect with them just as I did with Gilly and Donegan. B