A few months ago, I read your Carina Press novella, The Devil’s Garden, and enjoyed it quite a bit. It reminded me somewhat of a cross between Storm Constantine and Jacqueline Carey, which I thought was a good and interesting mix. I also liked that your characters fell outside the usual gender binary and heteronormative boundaries so when I heard you had a full-length novel coming out, I made sure to put it on my list. And even though I was less than enthused when I saw the cover (to say the least), I decided to follow the old adage, “Don’t judge a book by its cover.” This is definitely one of those cases. 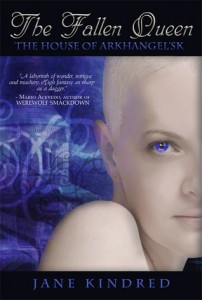 The Fallen Queen tells the story of Anazakia Helisonova, the bored daughter of the ruling imperial family of heaven. As should come as no surprise, Anazakia finds the trappings and social airs of royalty boring. She’d rather spend her time in heaven’s equivalent to slums where she gambles away her riches. It’s here that she meets a demon named Belphagor who takes her for all she’s worth.

But the loss of her valuables takes an immediate backseat when disaster strikes. On that very night, her family’s rule over heaven is usurped. Even worse, her family is massacred by someone they trusted. It’s only through a bit of magic, and trickery that Anazakia is alive. Unfortunately, it doesn’t look like she’ll stay that way for long, especially once her family’s assassins realize she’s still alive.

If readers are having some deja vu, there’s a reason for that. Anazakia’s story mirrors the story of Russia’s Anastasia Nikolaevna. And this isn’t some veiled reference; they’re explicitly linked in the novel. The Fallen Queen is essentially epic fantasy set in modern day Russia. I found this interesting because you normally don’t see fantasy that does this. There’s epic fantasy set in secondary fantasy worlds. There’s urban fantasy set on modern-day earth. We do occasionally see portal fantasies where people from modern day Earth go into a fantasy land or urban fantasies where the city setting is a secondary, constructed one, but I don’t think I’ve seen this particular mix in a long time. I found it refreshing and I suspect readers with a stronger background in Russian culture would get more out of it than I did. I don’t think a lack of knowledge will hinder comprehension, but I think some would enrich the reading experience.

I liked that Anazakia matures throughout the book. It is in many ways a coming of age story. She starts off as a clueless noble who had no idea of the turmoil surrounding her father’s rule. Yes, it’s true that ignorance is a sign of immense privilege but at the same time I do sympathize because if you’re wrapped in a coccoon, how could you possibly know what’s going on outside your immediate sphere? But as the story unfolds, she learns about the world and how both her own and her family’s actions lead to her current circumstances.

I’m pretty ambivalent about Anazakia’s relationship with the two demons, Belphagor and Vasily. I liked that it didn’t simplify the complicated nuances and that the relationship between Belphagor and Vasily didn’t get shunted aside once Anazakia came into the picture. Given The Devil’s Garden, I expected a varied presentation of sexualities and we got that, which was good. On the other hand, I did find the one character announcing that he was asexual to be somewhat out of the blue. Maybe if there’d been more build-up or actual on-page hints that he thought Anazakia was interested in him, I wouldn’t have that impression. It just seemed like it was thrown in there for the sake of including an asexual character.

On the other hand, despite Anazakia’s maturation as a character, I found her to be reactive rather than proactive for a good portion of the book. I realize that’s to be expected given that she’s on the run from assassins but I did find that her choices and actions to be overshadowed by Belphagor somewhat.

I normally don’t care for stories involving angels but I did like this take on it. The introductory notes on the worldbuilding were overwhelming and I quickly forgot them once I started reading, but the presentation was easy to pick up within context for me and I liked how some of the angels — particularly the ones sent after Anazaki and the guys — were depicted. They captured the idea of angels that were awesome and terrible in their beauty and power.

I do wish I’d gotten a better handle on the antagonist. Even at the end, she strikes me as being evil for the sake of being evil. That’s okay for some stories but since so much else of the novel has nuance, the villain definitely stands out as being two-dimensional by comparison. She’s power-hungry, murderous, and brainwashes people. I’m not asking for her to redeemed or anything, especially after everything she did, but maybe a little quality to make her less 2D.

In the end, I found The Fallen Queen to be an enjoyable read. It’s a fresh take on the hidden heir trying to recover the stolen throne despite all the references and historical events it bases itself on. I’m looking forward to the next installment. I just hope it gets a better cover. B