REVIEW: The End of Faking It by Natalie Anderson

I was reluctant to read this book for some reason and had saved it to the end of my monthly HP reading. I’ve read a couple of yours in the past (Caught on Camera being the one I remember). I mostly got caught up in the setups and the setup in this book was slightly problematic but the core of the story, the heroine afraid of intimacy and the hero that pursues her, is a trope that has always worked well for me. Because of that, I’m sure that I have overlooked obvious flaws in the storytelling. 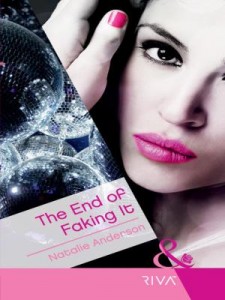 The book starts out with our standard HP hero, Carter Dodds, assuming that Penny of the short denim skirt and the red lips must be a siren luring men to their doom. Carter makes assumptions, bad ones, based on Penny’s attire and her fun and free attitude. Further, Carter basically douses Penny with water and then kisses her because that is what men do to random secretaries in the office. Carter is a presumptuous ass. He interferes with her life, thinks she is a bimbo, and then a man eater.

Penny won me over, though. She’s not interested in making commitments, not with people or a place. She temps because she won’t stay in one location for more than a year. She seeks out men who are as commitment phobic as she is. She goes out clubbing all night and takes men home with her. But there is an unhappy desperation to her lifestyle. Penny clearly loves people but she is afraid of intimacy on any level.

And fortunately, around chapter 3, Carter starts acting like a decent human being again once he acknowledges that he can barely think around Penny and he apologizes (although he could have groveled more). Later on in the story, Carter actually seems to become a different guy. One who is more understanding, more about Penny’s pleasure than his own. I don’t think his character arc was to change in this manner, but that the way in which he was written changed. As if the standard HP hero was trotted out in the beginning in order to hook the HP readers, but that the story and Penny needed a different kind of foil. I liked how Carter evolved although I don’t know if it was organic growth.

The reason for Penny’s neurosis is somehow related to a boyfriend she had with a teenager. I bought into the idea that this event that happened to her over seven years ago could still so strongly influence her life. Penny was trying to find enjoyment where she could with traveling and seeing new people and places. And she enjoyed sex and had enjoyed it in the past, although Penny always had to be in control and often, she never orgasmed so she faked it and she planned to fake it with Carter as well. (Thus the title)

My affection for this book rests a great deal on my appreciation for Penny as a character. Her yearning for deeper connections swam just under the surface and her presentation as the “in control but no intimacy girl” read like a gender switch in romance books. I think she could have been pushed harder (i.e. in her partying aspect, in her past relationships with men) but I can appreciate the parameters in which this was written. More

As an aside, I appreciated all the mentions of the modern ways of communicating. The characters text and email. Carter skypes with his father. Penny has an ereader. These things all give a nice contemporary feel to the story. Despite my initial reservations, I found that the Penny and Carter love story was sweet and, yes, very sexy. B