Off the top of my head, I can’t recall reading any Hanukkah stories so when DA was offered your book for possible review, my ears perked up and I took notice. Though I’m not Jewish, I thought it would be fun to read something different from the mass of Christmas themed books already loaded on my Sony. I can say I’m not disappointed in it or the love story. 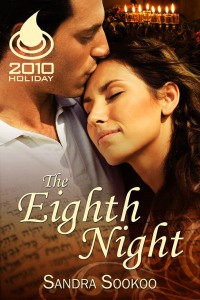 Eli Goodman knows when his cell phone rings that early in the morning, it’s bound to be his mother. Diane Goodman is a force of nature and as one of her daughters puts it, you either ignore her or go along with her. With a sinking heart he gets the order to Be There that evening for the first night – and to bring a bag of potatoes and ice. As he’s standing in line at Megamart, he notices the cashier who he’s seen a few times before and devises a plan to throw his matchmaking mother off the scent. He’ll invite this pretty shiksa and shamelessly use her to run interference with his interfering family. With luck, his mother will be so pissed with him that she’ll leave him alone for a few weeks of peace.

Brooke Langley has only a cold car ride home to her hamster to look forward to at the end of her mind numbing shift of work so when a handsome customer invites her home for his holiday, she mentally shrugs and decides “why not.” While I’m thinking, good thing this is not a romantic suspense and Brooke might want to be wary, she arrives at the Goodman home to be enveloped by the clan. Initially Brooke feels like a hooker in church which isn’t helped by the fact that Eli drags her off to the kitchen where they spend most of the time. A sharp encounter with his mother later and they’re on the way out the door.

Since Brooke didn’t exactly feel the love the evening before, she’s surprised when Eli shows up at Megamart the next evening and invites her to the second night. He’s bluntly honest – too blunt from Brooke’s POV – about why he’s inviting her but that second night, something clicks for her and she finds herself settling in and feeling a bit more at home. As an orphan with almost no one, she feels envious of this huge, boisterous group and of the easy acceptance they offer to family. She’s also learning to verbally push back when pushed and discovering that underneath his sometimes grumpy exterior, Eli is a charmer.

As the evenings speed by, Brooke and Eli start to accept the growing feelings between them, despite a few rocky patches. And with his mother’s seal of approval of her, Brooke dares hope that perhaps there might be a future with this handsome guy. But are the two of them ready to take a chance on something that’s only eight nights old?

Okay, so I’ve said I’m not Jewish and at the risk of offending those who are, there are a lot of Jewish stereotypes in this story. The bossy Jewish mother, the nosey relatives, the clique-ish stance against outsiders, the preference on having a profession rather than a job, the man who is henpecked by his female relations – I guess that in order to become a stereotype there must be a grain of truth about it somewhere but my eyebrows were still raised at times. That being said, most of this is portrayed with love and laughter and something to be embraced rather than run from.

Eli is a jerk at times but Brooke, backed by the women in his family, is woman enough to take him down a peg – or three – and straighten him out. You show that even though the Goodmans are initially skeptical of Brooke and grill her with questions later on, it’s all done because they love Eli and want the best for him. And that after they accept Brooke into the fold, she’s one of them for life.

I’m not usually keen on quick romances and this one is very fast – over eight nights as the title shows. But here I totally buy into it. And the sex is not only hot but fun too. I’m not so sure about Brooke’s decision to convert though. Changing one’s religion is, to me, something that needs a lot more thought and consideration than can be shown in a story this short.

With nothing to back me on picking this novella to read, I finished it satisfied with my gamble. It packs an emotional romance wallop along with joy for the holiday season without being cloying or sugary sweet. It also ensures that I’ll be watching to see what else you offer the romance reader. B