Note: I’m attempting to be vague on plot details to avoid spoilers for both this book and The Raven Boys, however I strongly recommend they be read in order.

Those who have read the young adult urban fantasy The Raven Boys, know that it ends on a line from Ronan which is… not exactly a cliffhanger, but more of a promise, a promise of something arcane in store. That promise is fulfilled in The Dream Thieves. 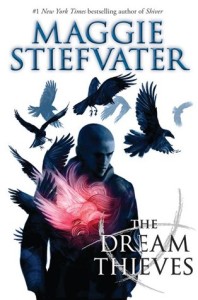 Ronan Lynch is one of the three Aglionby prep school boys who, along with a local girl, have joined their friend Gansey on his quest to find the burial spot of the ancient Welsh king Glendower. But that quest is no longer central in this book. Adam is struggling with three jobs to pay for his education, while also trying to figure out the meaning of his cataclysmic actions at the end of The Raven Boys. Noah is barely clinging to existence. Blue, the daughter of a family of psychics, is troubled by knowing that her kiss is prophesied to mean the death of her true love, and by her increasing fear about who her true love will turn out to be. And as always, Gansey is trying to keep all of his friends safe, and discovering the limits of his astonishing wealth and privilege when it comes to dealing with their problems.

And after having lost his beloved father Niall, the hostile, defiant, but strangely honorable Ronan learns he inherited the secret dream power that caused Niall’s death. A secret that now makes him a target.

Secrets are the theme of this book — secrets, and lies, and confronting what lives inside of you. Ronan makes a point of being utterly honest, but he’s full of secrets, and as he discovers, “There was not much difference between a lie and a secret.”
[spoiler]Although it isn’t a major plot element, the information slowly creeps in that Ronan’s most deeply suppressed secret is that he’s gay. Although it’s irksome that the only one of the four Raven Boys who isn’t in love with Blue turns out to be gay, it’s kind of a beautiful story arc. I loved the way Ronan’s feelings for Gansey are described — sex doesn’t enter into it and doesn’t need to enter into it; the brotherhood he gets from Gansey is everything in itself.[/spoiler]

As someone who loved the first book and these characters, I found this story went to some upsetting places — not just because Ronan is in danger (and by extension, so are his family and friends) but because the tight friendships are fragmenting. The complicated differences between have-not Adam and have-everything Gansey begin to seriously stress their relationship. Gansey is also challenged by Ronan’s anger, constantly trying to hold on to the memory of the person he was before his father’s death and reassuring himself that, “Ronan was broken, Ronan was fixable, Ronan had a soul.” Blue is full of complex jealousies and a yearning for more than what being a poor girl in a small town can bring her — meanwhile, her mother is drawn to a dangerous stranger. And Ronan’s reckless thrill-seeking, as well as his need to explore what’s  happened to him, take him into squirm-inducing experiments with danger.

But once again, except for a true cliffhanger ending this time, it all comes together; the fantastical elements of the story thematically link to the character arcs for a surprising and satisfying resolution.

I love the way this series is written — so evocative, in a tart, sassy, sometimes biting way. Here’s a typical description of Gansey:

He stood in the sun-soaked driveway of the Ganseys’ Washington, D.C. mansion, wearing a furiously red tie and a suit made of tasteful pinstripe and regal swagger.

What more do you need to know? Well, quite a lot actually, because there’s so much more to Gansey than his family’s money and power. But it remains an integral part of his personality.

Here’s a stranger’s view of Ronan:

…there was a carefully cultivated sense of danger to this Lynch brother. This was not a rattlesnake hidden in the grass, but a deadly coral snake striped with warning colors. Everything about him was a warning: If this snake bit you, you had no one to blame but yourself.

And a characteristic interaction between Blue and her mother:

It had been a lot easier when Adam, the poorest of the lot, had seemed more like her. Now she felt as if she had something to prove. The others were Team Power, and she was supposed to be Team Ingenuity, or something.

Her mother waved a card at her in farewell. “Bye. Will you be home for dinner? I’m making midlife crisis.”

Still, this is not the complete masterpiece its predecessor is. Plotwise, it feels more like a television show than a novel: the introduction of new villains, and characters that were supposedly there all along, gives it a “Monster of the Week”  feeling, which is very antithetical to the atmosphere created by the first book.

[spoiler]I particularly disliked how Ronan’s younger brother, barely mentioned in the first book, conveniently appears here as someone he cares about, to be used as a weapon against him.[/spoiler]

We also don’t see enough of Blue, who was previously an important person in her own right. When we do see her, it feels like she’s struggling not to fade into another cliched teenage girl bone between two dogs, but doesn’t succeed. The continued formation of a love triangle between Blue, Gansey and Adam, which felt organic in The Raven Boys, starts to feel more obligatory here, though the actual depiction of romantic feelings is bone-melting in its subtle way.

It’s disappointing to not have my socks completely knocked off a second time. But even with its flaws, I’d say this story at least unrolled them. B.